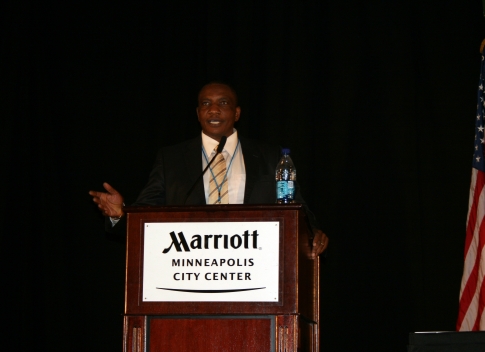 MINNEAPOLIS – The National Social Security Fund of Tanzania (NSSF) today unveiled an ambitious welfare scheme for Tanzanians in the Diaspora estimated at 170,000.

The groundbreaking scheme was announced by the NSSF Director of Operations, Mr. Crecentius .J. Magori, when he addressed delegates to the second annual Diaspora Council for Tanzanians in America convention (DICOTA) that is going on this weekend in Minneapolis.

In a well received speech, Mr. Magori qualified his remarks by stating that final details were still pending and were subject to the consultations he will be holding with Diaspora members while in Minneapolis.
Dubbed WESTADI (Welfare Scheme for Tanzanians in Diaspora), the scheme is targeted to cover at least 5% of the Diaspora.

The scheme which is modeled in the form of an insurance policy will provide for outpatient and in-patient medical services to members and their families back in Tanzania. A low annual premium of $200 will provide coverage for the insured and up to four dependents while in Tanzania and include those left behind in Tanzania.

A section of his presentation that drew the most applause was when he announced that part of the proposed scheme will cover the transportation of the human remains of a member back to Tanzania and that the benefit package will also provide for an air ticket for one individual to accompany the remains.
“The days of calling a mchango (fundraiser) to send a body home will be history”, he declared to cheers from the audience.

Other benefits to accrue from the scheme will include the provision of an airline ticket to a sick member to go back to Tanzania. A ticket will also be provided to a person accompanying the sick member.

On how premiums for the new scheme will be collected, Mr. Magori said the NSSF is in negotiations with Stanbic Bank, part of the Standard Chartered Bank system for the management and collection of premiums. The idea of using a multinational bank seemed to trouble some in the audience who felt there could be other more convenient and cost-effective ways “such as PayPal” one delegate offered.

Whichever way the premiums were remitted did not appear to trouble North Carolina physician Dr. Kurwa Nyigu as long as they were efficient. “These are things to be explored whether it’s PayPal or standard Banks,” Nyigu said.

Nyigu who was also a delegate to the inaugural DICOTA Houston convention last year was impressed by NSSF’s presentation at that convention which led her to visit NSSF’s office in Tanzania while on vacation last year. Nyigu was impressed with the tremendous changes the NSSF has made in this year’s convention and how much NSSF officials have listened to her suggestions as a member of the Tanzanian Diaspora.

“The first convention was more ideas without a clear plan,” Nyigu said. “This year’s convention is more detailed and engaging.”