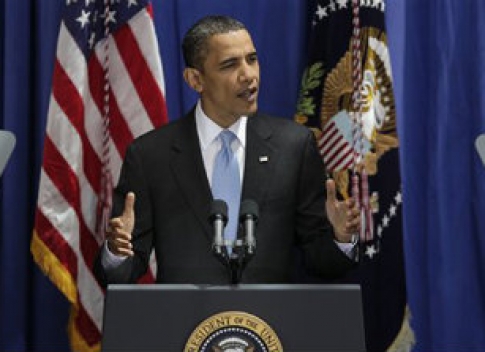 President Obama’s speech may be too little, too late on immigration. But few have said it better.

Obama’s remarks at American University ahead of the July 4 holiday – his first major policy speech devoted solely to this issue – tried to reframe a debate that has grown more contentious than ever with the advent of Arizona’s new legislative crackdown on illegal immigration, which will go into effect later this month.

Clearly meant to galvanize national opinion, and reframe the debate, Obama’s speech cast immigration as an essential part of the American spirit, a force for good in business, and an ingredient in the country’s economic competitiveness.

The president quoted poet Emma Lazarus’s early-20th century words—words inscribed on the Statue of Liberty–about America receiving the globe’s “tempest-tossed” and “huddled masses yearning to be free.” But he also embraced immigration as a source of economy-powering talent and innovation.

“The scientific breakthroughs of Albert Einstein, the inventions of Nikola Tesla, the great ventures of Andrew Carnegie’s U.S. Steel and Sergey Brin’s Google -– all this was possible because of immigrants,” said Obama.

The speech definitely put immigration back in the spotlight and lent it the shine of a presidential priority.

“This elevates the issue,” stated Janet Murguia, president of National Council of La Raza, a Latino advocacy group, in a conference call with reporters after the speech.

But it is unclear whether the presidents’ words will be enough to realize real change in immigration any time soon, even though he challenged Republicans to set aside election year bickering to get something done on the issue.

Some doubted whether Obama had gone far enough.

Chung-Wha Hong, head of the New York Immigration Coalition, asked whether Obama is truly risking his political capital because his administration has refused to suspend several federal enforcement programs that advocates for immigrants see as misguided and damaging.

One of the programs most unpopular with advocates is “287g.” Named after a section of the 1996 federal legislation that created it, this statute delegates immigration powers to state and local police (making it a kind of precursor to the Arizona law).

“Yes, we need the president to speak forcefully and honestly about an issue of such importance, and we are grateful he did that,” Hong said. “But we also need to see action.”

Tamar Jacoby, a conservative proponent of immigration reform and president of ImmigrationWorks USA, argued that Obama’s scapegoating of the GOP would prove counterproductive.

“The president is still scolding and blaming Republicans rather than appealing to them in terms that might draw them into a serious effort to compromise on a bill,” she said.

Obama did not shy away from the most explosive part of the immigration debate–the question of illegal immigration. He reserved tough words, and an almost scolding tone, for those who believe border fences or deportations alone will solve the problem of the 11 million undocumented immigrants making up much of the laboring underclass in the United States.

He said those who already had entered the country illegally should be required to register, learn English, pay a fine, pay taxes and wait in line to gain legal status.

Ultimately, the president said, only a more flexible legal immigration system—one that makes room for family reunification and allows young immigrants to attend college and find jobs– can ensure that immigration will flow through proper channels. Add to that flexibility a strict accounting system for business owners, who create jobs magnets by flouting immigration law, he said.

The president stressed that approaches like Arizona’s only fan the flames of the debate without offering real solutions.

It is only after pushing through health care reform, the stimulus program and a Wall Street overhaul that Obama has turned his rhetorical gifts to immigration. It may be that at this stage, with Democrats facing difficult midterm elections in November, Obama’s golden tongue–coupled with Chief of Staff Rahm Emanuel’s legislative arm-twisting–are no longer enough to turn a debate.

In the nation’s capital, advocates for immigrants still see opportunities for immigration reform to move forward, and welcomed the president’s public nudge to Republicans on immigration.

“This legislative year is not over,” said Angela Kelley, immigration expert at the Center for American Progress, a think tank tied to the Democratic party. Given Republican recalcitrance on this issue, she added, “I think it is fair for (Obama) to say, I can lead, I can push, but I can’t do this alone.”

After a bruising 18 months in office, President Obama is no longer King Midas. It is no longer true that whatever he touches becomes a political sure bet. He does not command the popularity, political capital or legislative super-majority he once did to get major change through without Republican support on Capitol Hill.

So immigration reform could very well remain a giant sleeper of an issue, despite Obama’s talent for rousing words.