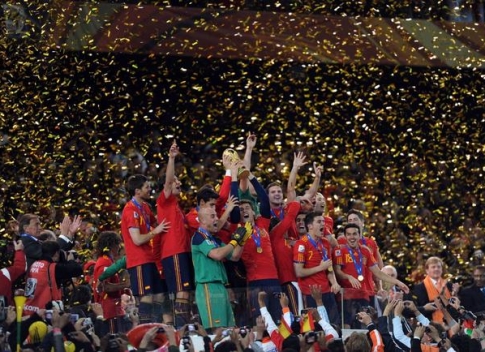 The United Nations today hailed the 2010 World Cup as a great success for the Government and people of the host nation South Africa, as well as the entire African continent, adding that the event also served as a vital tool to promote development and peace.

“Irrespective of the result of the final, the real victor of the 2010 World Cup is Africa and the South African people,” according to a press release issued by the world body after the end of the month-long tournament in which Spain took home the top prize.

The organization of the world’s biggest sporting event “surpassed expectations, as the tournament took place in a positive spirit and safe environment for athletes, fans, observers, and local community members alike.

“While there may have been doubts prior to the World Cup about staging the event in South Africa, there is now widespread confidence in the ability of the region to stage such global events.”

The UN added that a number of initiatives surrounding the tournament – held for the first time in Africa – also helped to advance a host of development objectives from ensuring quality education and a clean environment to reducing hunger and disease.

The 2010 World Cup “marked an unprecedented opportunity for the United Nations to promote its development and peacebuilding efforts, in particular the Millennium Development Goals (MDGs),” the world body stated, referring to the anti-poverty targets world leaders have pledged to achieve by 2015.

Although sport was already widely used by the UN prior to the World Cup as a cost-efficient and effective tool for development and peace, the 2010 World Cup has given the use of sport as a development tool “an incredible burst of momentum” that has been felt throughout the UN system.

“It is my hope that the momentum that has been gained through the World Cup will carry through in the coming years and hopefully be amplified even further through the engagement of governments,” said Secretary-General Ban Ki-moon.

Mr. Ban, who attended the opening ceremony in Johannesburg on 11 June, encouraged governments to work with the UN system and his Special Adviser on Sport for Development and Peace, Wilfried Lemke, to harness the power of sport as a development and peacebuilding tool.