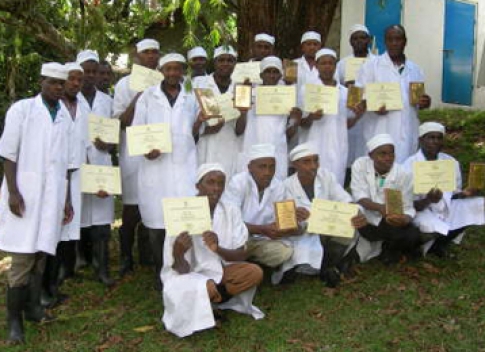 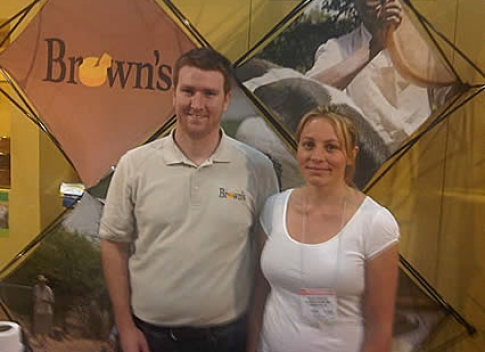 Brown’s Cheeses is something of a multinational corporation on a tiny scale: It sells brie, mozzarella and other European-style cheeses made by East Africans, it’s owned by a Kenyan couple of British descent, and their daughter and her American-born husband will start running the company this year.

Its ambitions are far-reaching, too, and brought Brown’s Cheeses to New York this summer for the Fancy Food Show.

Andrew Stirling, the American, said his wife Delia’s parents started the company in Limuru, Kenya, in the highlands north of Nairobi, almost by accident 30 years ago, the byproduct of a craving. “They started making cheese out of their kitchen because they couldn’t buy cheese that they liked, and started giving it as Christmas gifts,” he said. “And those same people started requesting it and became their first customers.”

David and Sue Brown expanded their cheese repertoire over the years, learning the craft by trial and error and on trips to Italy and France. “It’s a small market, so you’re very close to your customers,” Stirling said. “You get a phone call if somebody gets a bad cheese. Fortunately, that doesn’t happen very often anymore.”

The Browns used milk from their small herd of about 20 cows and then supplemented it with cow’s milk and goat’s milk from hundreds of other small, sustainable family farms nearby. The cheeses are handmade and all natural, and they have a following among European and American expatriates in Kenya and Tanzania as well as among tour and safari companies that serve Brown’s cheeses to their customers.

Transporting cheese across the Atlantic is no small thing, but Stirling said the United States offers powerful incentives: a large market of cheese lovers and the African Growth and Opportunity Act (AGOA). Begun in 2000, AGOA is a U.S. government initiative that helps expand U.S.-African trade and investment, promotes free markets, stimulates economic growth and assists sub-Saharan Africa as it integrates into the global economy. At the food show, Brown’s Cheeses was one of several African businesses featured at a booth for the Competitiveness and Trade Expansion Program (COMPETE), sponsored by the U.S. Agency for International Development (USAID).

“We can bring our cheese to the U.S. duty-free. That is a huge advantage for us,” Stirling said. “Certainly, we have to balance that with the increased logistics costs of maintaining a cold chain from Nairobi, which is essentially on the equator, through Europe to the U.S. and then through customs in the U.S.”

The logistical problems are not insurmountable, though: Stirling said Kenyan flower exporters have given him advice, and the air freight company that delivered an assortment of Brown’s Cheeses for the New York show proved that it can do the job.

Curiosity might help generate interest among consumers, Stirling said: “We like to think that we have the best cheese in Africa, and we think a lot of cheese shops would be interested in carrying a cheese from Africa, if it were available.” Response from buyers for North American retailers at the Fancy Food Show “has been very strong.”

Stirling said his in-laws are ready to retire from the cheese business and concentrate on their other interests — Sue is an herbalist, David a painter — and he and Delia have worked in the cheese operation enough in years past to take it over. In the United States, he has been a product manager for an electronics company, and she has been a commercial real estate broker; now they can apply that business experience to cheese.

Stirling said the prospect of growing a business of their own was exciting and “a great opportunity.” But he admitted to one sore point: “I do get some flak from my mother for moving 10,000 miles away.”