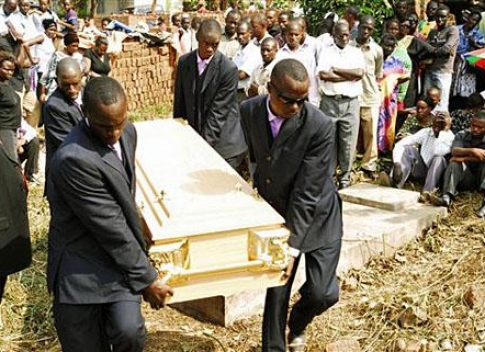 President Obama said the United States will redouble its cooperation with Uganda and other African Union members against the Somali terror group al-Shabaab to try to ensure that it and similar organizations “are not able to kill Africans with impunity.”

Speaking with the South African Broadcasting Corporation at the White House July 13, Obama said he had conveyed to Ugandan President Yoweri Museveni the condolences of the American people for the July 11 attacks that killed more than 70 who had gathered at locations in Kampala to watch the World Cup final. Obama also told Museveni that the United States will support a thorough investigation into the attacks, for which al-Shabaab has claimed credit.

Obama said it was “tragic and ironic” that the attacks took place during South Africa’s hosting of the World Cup, which had offered “a terrific showcase … for Africa as a whole” by refuting negative stereotypes of African capacity and demonstrating that “when given an opportunity, Africa is a continent full of leaders, entrepreneurs, [and] governments that can operate effectively.”

“On the one hand, you have a vision of an Africa on the move, an Africa that is unified, an Africa that is modernizing and creating opportunities; and on the other hand, you’ve got a vision of al-Qaida and al-Shabaab that is about destruction and death,” Obama said. “I think it presents a pretty clear contrast in terms of the future that most Africans want for themselves and their children.”

The international community needs to “support those who want to build, as opposed to want to destroy,” he said. And as Somalia’s Transitional Federal Government continues to try to establish itself, he said, African Union peacekeeping forces should work with Somali authorities to “try to stabilize the situation and start putting that country on a pathway that provides opportunity for people, as opposed to creating a breeding ground for terrorism” that could export more violence beyond Somalia’s borders if al-Shabaab gains more control within the country.

Obama said statements by terror organizations show that “they do not regard African life as valuable in and of itself. They see it as a potential place where you can carry out ideological battles that kill innocents without regard to long-term consequences for their short-term tactical gains.”

For that reason, he said, it is important that even as the international community deals militarily with al Shabaab and other violent extremists, it must also promote development, entrepreneurship, democracy and human freedoms and build upon the models of countries like South Africa that “are trying to move in the right direction” and empower their citizens to improve their lives. “Hopefully, the United States can be an effective partner in that,” the president said.

Obama referred to his July 2009 speech in Ghana, where he said the United States can partner with African nations, “but ultimately, on whether it’s issues of eliminating corruption, ensuring smooth transitions of democratic governments, making sure that businesses are able to thrive and prosper and that markets are working for the smallest farmer and not just the most well-connected person — those are issues that Africans can work on together.”

The United States wants to provide resources to Africa but wants to partner with Africans “who are interested in growing their own capacity over time and not having a long-term dependency on foreign aid,” the president said.

Obama said former South African President Nelson Mandela has provided a path to understand “the standards of leadership that are needed” on the continent and expressed confidence that those standards could be met. Mandela is “not just a national treasure” for South Africa, “but a world treasure,” he said.

“We are constantly reminded that his legacy of seeing every person as important, and not making distinctions based on race or class but the degree to which they are people of character — that’s a good guidepost for how all of us should operate as leaders,” Obama said.