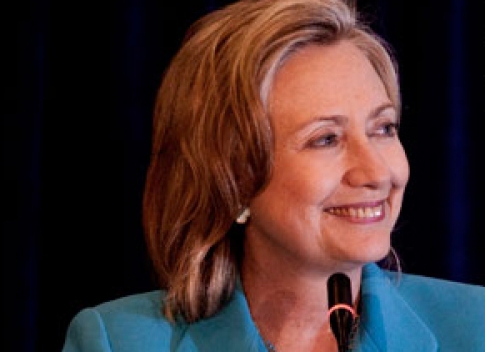 U.S. ambassadors in Africa must help the United States chart a new course for sustainable American engagement on the continent, Secretary of State Hillary Rodham Clinton says. Clinton addressed the ambassadors at the annual African Chiefs of Mission Conference at the State Department in Washington October 5.

“We are continuing to try to strengthen democratic institutions and the rule of law” in Africa, she said. “We know that the challenges of staying on a course of open, transparent government, with moving away from the sort of big-man theory of governance, to move away from our relationship, as President Obama said in Ghana, from one of patronage to partnership, takes time. … There are no quick fixes here at all.”

The department’s Bureau of African Affairs is rebuilding bilateral and multilateral collaboration and engagement in Africa, Clinton said. “It’s very important that we do more to build up the African Union and other regional entities like the East African Community, which has a real potential for being an engine of economic prosperity.”

The secretary praised African participation in peacekeeping efforts in the region and noted that the United States has helped train more than 120,000 peacekeeping soldiers.

“Africans have been extraordinarily willing, from Senegal to Ghana to Burundi, to engage in peacekeeping. But it is important that we continue our training and our oversight,” she said. “We also have to do a better job of working with the U.N. so that their peacekeeping presence of non-African forces, such as in eastern Congo, are more responsive and better able to meet the needs of the civilian population for protection and security.”

Clinton pointed to U.S. commitments — $6.3 billion — to public health projects in Africa aimed at ending deaths from malaria and tuberculosis and eradicating polio from the continent. The great need, she said, is to “make sure … that we use this money to help build the capacity of African institutions themselves, to treat these diseased, to have more of a systematic approach to health care, to address the brain drain that deprives the continent of medical professionals.”

“I really believe not only in Africa’s potential, but in the potential of the State Department and USAID [U.S. Agency for International Development] and our entire government to have a more productive, constructive, sustainable engagement with Africa into the 21st century,” Clinton said.