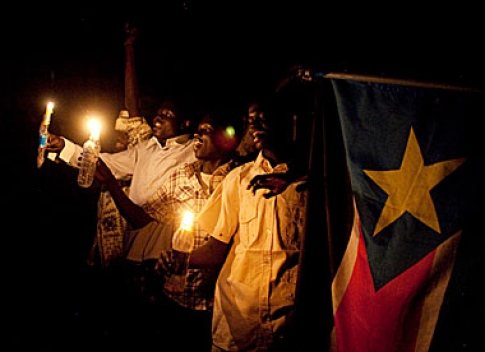 With the announcement that an overwhelming majority of southern Sudanese have voted to establish an independent state, the Obama administration says it intends to recognize the new country in July and is also beginning the process of withdrawing Sudan from its list of state sponsors of terrorism.

“After decades of conflict, the images of millions of southern Sudanese voters deciding their own future was an inspiration to the world and another step forward in Africa’s long journey toward justice and democracy,” President Obama said in a February 7 statement.

The final results of the January 9–15 referendum were announced February 7, revealing that more than 98 percent of southern voters had chosen to secede from Sudan.

Obama congratulated the people of southern Sudan and said he is “pleased to announce the intention of the United States to formally recognize Southern Sudan as a sovereign, independent state in July 2011.”

All parties need to “ensure that this historic moment of promise becomes a moment of lasting progress,” Obama said. The president called for the full implementation of the 2005 Comprehensive Peace Agreement (CPA) and said all outstanding disputes need to be resolved peacefully.

“At the same time, there must be an end to attacks on civilians in Darfur and a definitive end to that conflict,” Obama said.

“The United States will continue to support the aspirations of all Sudanese … [and] will work with the governments of Sudan and Southern Sudan to ensure a smooth and peaceful transition to independence,” he said.

Secretary of State Hillary Rodham Clinton commended the Sudanese government in Khartoum for accepting the outcome of the referendum.

She announced that the United States “is initiating the process of withdrawing Sudan’s State Sponsor of Terrorism designation, the first step of which is initiating a review of that designation.”

Sudan has been listed as a state sponsor of terrorism since 1993 due to its links with international terrorist organizations. Terrorist leaders including Carlos the Jackal, Osama bin Laden and Abu Nidal resided in Khartoum during the 1980s and 1990s. The designation has prohibited Sudan from buying or receiving U.S. armaments and from receiving any U.S. economic assistance, in addition to other restrictions.

“Removal of the State Sponsor of Terrorism designation will take place if and when Sudan meets all criteria spelled out in U.S. law, including not supporting international terrorism for the preceding six months and providing assurance it will not support such acts in the future, and fully implements the 2005 Comprehensive Peace Agreement, including reaching a political solution on Abyei and key post-referendum arrangements,” Clinton said.

State Department spokesman P.J. Crowley said February 7 that Sudan has indicated it wants to have more normal relations with the United States and the state-sponsor designation is an issue that stands between Khartoum and Washington.

“We’ve indicated that, going forward, we are willing to work to resolve this, with the caveat … that there are particular legal requirements that have to be satisfied before this action could be taken,” Crowley said.