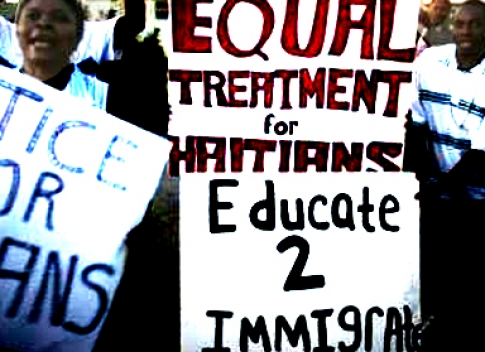 This spring, at a press conference on Capitol Hill, Tolu Olubunmi came out publicly as an undocumented immigrant for the first time.

“It’s been nerve-racking because it puts me at a risk,” the 30-year-old said of her speech supporting Illinois Sen. Dick Durbin’s (D-Ill.) reintroduction of the DREAM Act. The bill, which passed in the House last year but failed to clear the Senate, would provide a path to citizenship for undocumented youths like her, brought to the United States as children. “But I think you have to focus on the individuals to get away from the politics of an issue that’s so divisive. Once you know that there are real people attached to the statistics, then you have to start working on real solutions.”

Olubunmi, who was born in Nigeria, is also one of 3 million black immigrants in this country. Despite moving from Africa, the Caribbean and Latin America at a remarkable rate — and despite an estimated 400,000 having undocumented status — they are barely footnotes in an immigration-reform conversation that is usually framed as a Mexican-border issue. But in light of newer, smaller-but-growing communities, as well as recently granted protected status for Haitians in particular, black immigrants are becoming stronger voices, advocating for reform from their diverse perspectives.

According to a Population Reference Bureau report, about two-thirds of black immigrants to the U.S. are from the Caribbean and Latin America — mostly Jamaica, Haiti and Trinidad — with families that largely began settling in the United States from the 1960s through the ’80s. More recently there’s been a wave of African immigrants, with more arriving between 2000 and 2005 than in the previous decade. The top three countries from that continent are Nigeria, Ethiopia and Ghana.

Most black immigrants enter the United States legally, seeking education and job opportunities, either by joining immediate relatives who are U.S. citizens or by presenting student or tourist visas with an expiration date. Those who are undocumented often fall out of status by overstaying these visas.

Caribbean- and African-born blacks tend to be wealthier and more educated than other immigrants, a class difference that has kept many from joining Latinos in the immigration-reform movement. But in recent years, with more African and Caribbean people coming to the United States to flee political strife, civil violence and natural disasters, new groups are entering as refugees or asylum seekers. While only 3 percent of immigrants from Caribbean countries, mostly from Haiti, were admitted under the refugee category, nearly 30 percent of sub-Saharan Africans granted legal residence between 2000 and 2006 entered as refugees.

As these flows of people have come from countries like Somalia, Congo, Liberia and Haiti — without the same educational resources allowing them to flourish — many have run into trouble navigating a slow-moving and restrictive immigration system.

Although immigration from Africa and the Caribbean has grown rapidly over the past decade, having contributed to at least one-fifth of America’s black population growth between 2000 and 2005 alone, there are anecdotal arguments that the process is infused with racism and works less efficiently for black people.

Sheryl Winarick, an immigration attorney in Washington, D.C., suggests that the largest hurdles for blacks in the immigration system, particularly those fleeing poverty or civil strife, usually arise from the economic situation in their countries. She explained that most visas require proof that an individual plans to return home after a temporary visit to the U.S.

“Anyone that’s coming from a developing country has a harder time demonstrating their intent to just visit instead of staying permanently,” she told The Root. “If you don’t own a home or have a steady flow of income to go back to, then the government assumes you’re more likely to want to stay here permanently and find work.”

On the other hand, Phil Hutchings, an organizer with Oakland, Calif.’s Black Alliance for Just Immigration, which lobbies for immigrants’ rights, believes that race is always in play. “It factors into whether you get through speedily or whether there’s a lot of circumspection,” he says.

“People who go against the norm of what Americans are ‘supposed to look like’ — and that generally includes black people — have more difficulty,” he continues. “Also, a fair number of African immigrants are Muslim, putting them in a suspect category that makes it harder for them to come here.”

For her part, Olubunmi says her challenges stemmed from a rigid policy that makes it impossible for undocumented immigrants to rectify their situation once they fall out of legal status. When she was 14, her mother brought her to Maryland from Nigeria to escape political instabilities. The plan was for her aunt, a U.S. citizen, to adopt her.

“The plan was never to be undocumented,” she says, but the process hit a snag when her papers were filed late. It’s a common mishap. “When you file your paperwork, officials could say that you missed a deadline by a week or two, but they don’t actually respond to you for two or three years because of the backlog. People who are committed to doing the right thing get caught up, unbeknownst to them, in these basic flaws in the system. It’s pretty easy to fall through the cracks.”

Olubunmi graduated from high school at the top of her class and then from college, earning a chemical engineering degree. She anticipated filing her papers with a company that would hire her as an engineer, only to learn that she couldn’t legally get a job. “The law says that if you’re undocumented, you cannot adjust your status while living in the U.S.,” she says. “I’d have to go to Nigeria to sort out the conflict; then, once I got there, it would trigger a three-to-10-year bar from returning to this country. But this is my home.”

Since 2008, Olubunmi has volunteered with various advocacy organizations, working behind the scenes for comprehensive immigration reform and the DREAM Act in particular. “We’re not asking for a free pass,” she says, explaining that many would-be beneficiaries were brought over as babies or toddlers.

“People always say, ‘Get in line.’ Well, the DREAM Act creates a line,” she says. “These students are saying that they will do whatever they have to, if it’s going to college or serving in the military. They are just asking for an opportunity to prove themselves worthy of the country they love.”

David Faustin, 45, says he had a smooth process coming to the United States from Haiti 22 years ago. He acquired his green card upon marrying his wife, who already had permanent residency, and became a citizen after 10 years of marriage. But as the pastor of a Washington, D.C. church with largely Haitian congregants, he has helped many of them through a far more difficult course.

When a devastating earthquake plunged the island into further despair in 2010, he was relieved by the Obama administration’s decision to grant Temporary Protected Status for Haitians who had already been living in the U.S., allowing them to stay here legally and suspending deportations.

“The church brought in lawyers like Ms. Winarick to help people who were scared of applying for TPS because they were of unlawful status,” he tells The Root. “They thought it was a way for immigration officials to know where they live.”

This month, the Department of Homeland Security announced that it would extend TPS for Haitians, which was scheduled to expire in July, for another 18 months. The department also expanded it to include Haitians who came here up to one year after the 2010 earthquake. “Having protected status is helping a lot of Haitian people to not only make it here and contribute to the American economy, but also to send money to other people back home and help them survive,” says Faustin.

Furthermore, it has empowered more Haitians to organize around immigration reform, partnering with immigrant-rights groups to build a powerful lobby. “In the past it was just the Hispanic community, but the Haitian community has become involved to advocate for what they would like to see happening for them,” says Faustin, citing, for example, amnesty for immigrants who once had legal status but are now unable to resolve their position. “As soon as the government gave them TPS, Haitians decided to take advantage of the momentum.”

Hutchings, of the 10-year-old Black Alliance, concurs that he’s seen other black-immigrant organizations mobilize in recent years, including San Francisco’s African Advocacy Network and Chicago’s Pan African Association. “In different parts of the country, black immigrants have developed enclosed communities just to themselves,” he says. “But at a certain point, a community realizes that it needs to reach out to develop allies and meet political officials. Their participation is really about people beginning to take responsibility for their own development in the United States.”

Olubunmi is heartened to see more people from African and Caribbean countries speaking out. “The majority of undocumented immigrants are Latino, but it’s important to recognize that there are different groups involved in this debate,” she says. “I remember once watching Bush talk about creating a path for folks who ‘come across the border.’ Well, if a bill is written from that perspective, it wouldn’t work for everybody.”

Ultimately, she knows that a system that works for everyone will require action from Washington. “I’m a huge supporter of President Obama, but I am very disappointed that we haven’t been able to get comprehensive immigration reform done,” she says.

While she understands that Congress must act, as the president demanded in his recent immigration-policy speech, she maintains that he has executive authority to make some changes himself — changes like stopping the deportation of undocumented “Dreamers.”

Until then, Olubunmi is committed to lending her voice to the struggle, even if it now means going public with her own status. “If it will help to raise consciousness, if it will help make life easier for other people,” she says with a quick, nervous laugh, “then I will lay myself at the altar.”