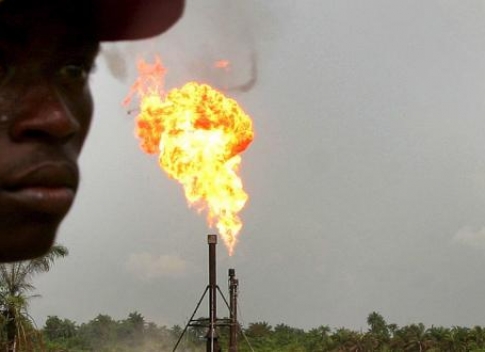 Saro Nkesi still finds it difficult to talk about the years before he finally left Nigeria.

“During the period of 1993 to 1995, I was always staying in the bush and dashed home to eat and went back to the bush again,” he said. “Sometimes I would stay with other friends who were not from Ogoni. It was a terrible time in my life.”

Nkesi participated in nonviolent protests against Shell Oil’s operations in the Niger Delta’s Ogoniland. He sought to evade the Nigerian government forces that would sweep into Rivers State to suppress the popular resistance to decades of oil exploration unhampered by environmental, developmental or humanitarian concerns. But on one fateful occasion, he said, instead of finding him, “they saw my wife and they killed her.”

Nkesi was a guest speaker at the Second Annual African Justice Initiative Symposium, “Oil & Gas in Africa: A Blessing or a Curse?” hosted by the Washington College of Law at American University earlier this spring. Among the presenters, Nkesi was the only Ogoni eyewitness to the events leading to the hanging of author and activist Ken Saro-Wiwa and eight other Ogoni leaders in 1995 by the regime of the late Nigerian president Sani Abacha.

The organized resistance to oil extraction in Ogoniland prompted Shell to suspend operations there in 1993 and it has yet to resume, but pipelines, some prone to leakage from age or poor maintenance, still traverse the territory. Some estimates are that 9 billion gallons of oil have spilled into the Delta since oil was first discovered in the mid 1950s.

Nana Yaa Anyane-Yeboa, president of the African Justice Initiative and a law student at American University, selected oil as the symposium’s topic last fall, months before tumult began wrenching the Arab world and international markets. She had read about Ogoniland’s history, but particularly the controversy over a yet to be released United Nations Environmental Program (UNEP) report. The goal of the report is to provide a roadmap for environmental remediation in Ogoniland but the UNEP team is also charged with identifying the sources of oil pollution there.

Despite its environmental assessment work being funded by a $9.5 million grant from the Shell Petroleum Development Corporation, UNEP has insisted on its capacity to be impartial. Detractors allege otherwise.

Critics, who said they were leaked advance information, have claimed that the report will instead blame the larger percentage oil spills in Ogoniland to sabotage of the pipelines or attempts at “bunkering” or theft of the oil. UNEP denies the allegation. The report is due out this year.

Anyane-Yeboa said she became dismayed by the concerns of environmental activists and other critics that the report thus far “virtually exonerated Shell” for the devastating environmental consequences of its practices.

Anyane-Yeboa was only a teenager in 1995 when the Ogoni Nine were executed after being sentenced by a military tribunal that allowed them no legal representation and no right to appeal. Born an American to Ghanaian immigrant parents, she said the tragedy of the Ogoni had escaped her notice though she has followed other issues affecting Africa. One of her interests is that Nigeria’s history of oil not be repeated in Ghana where an off-shore field was discovered in 2007. Nigeria is America’s fifth-largest supplier of oil after Canada, Saudi Arabia, Mexico, and Venezuela.

Omoyele Sowore, a Nigerian journalist with Sahara Reporters, and a former student activist in Nigeria, said in his keynote address that the Niger Delta “epitomizes poverty.” He cited several causes for the region’s condition, including: the loss of fishing as a sustainable occupation due to chemically poisoned water also not fit for human consumption; the decline of agriculture due to polluted land; acid rain caused by the constant flaring of the gas generated by oil production; and a rash of diseases he attributes to oil pollution as their most likely cause.

He said the Delta’s population has no easy access to hospitals, paved roads or other infrastructure one would expect from a region which yields between an estimated 85 to 90 percent of Nigeria’s export earnings. That revenue finances development in the rest of country and pays for the brutal repression by the Nigerian “Kill and Go” police squads and military—as directed by Shell and other petroleum multi-nationals, Sowore said.

To support his claim of Shell’s intimate relationship with the Nigerian government, Sowore cited recent Wikileaks revelations where Shell executives boasted about their influence within every Nigerian ministry. Sowore, who is from the Niger Delta but is not an Ogoni, said the execution of Ken Saro-Wiwa was “a contract killing” carried out by the Abacha regime at the behest of Shell.

Sowore said Shell told the Nigerian government, “We want to get rid of this guy,” because Saro-Wiwa and the Movement for the Survival of the Ogoni People (MOSOP) had begun to attract international attention about the industry’s egregious practices and the resulting suffering of the Delta’s people.

The Niger Delta, along Nigeria’s Gulf of Guinea coast, includes nine of the country’s 36 states, a multiplicity of tribes and a populace of which the Ogoni are a small number. At issue, in part, is the lack of consensus between the federal government and those states about revenue-sharing formulas derived from oil profits. In the meantime, the environmentally damaging practices from oil exploration have left a crippling legacy.

Judith Brown Chomsky, a cooperating attorney with the Center for Constitutional Rights, spoke about the effects of oil extraction. “There are villages in the Niger Delta where children don’t see a dark sky even at night because the oil flares constantly,” she said. In the petroleum extraction process, Chomsky explained that the accompanying gas “comes out with a roar” and is burned off or “flared” in the Niger Delta.

Flaring is less costly than more environmentally sustainable alternatives which reduce profit margins. Shell felt it could operate with impunity because it was veiled from public scrutiny, Chomsky maintained.

Chomsky also discussed Wiwa v Shell, the lawsuit brought against Royal Dutch Shell for human rights abuses under the Alien Tort Statute and the Torture Victim Act in an American court by Ken Saro-Wiwa’s son and other Ogoni plaintiffs. In 2009, after 14 years, Shell, without admitting wrongdoing and before going to trial, settled for $15.5 million. Environmental damages were not a part of the suit, but Chomsky said that through the legal process of discovery, the plaintiffs’ attorneys were “able to read what corporations were thinking and doing from their own documents.”

What became apparent was that Ken Saro-Wiwa and MOSOP were considered a serious threat, in part because of media exposure outside of Africa.

Since 1993, MOSOP’s organized nonviolent resistance has prevented Shell from extracting oil in Ogoniland. But, throughout the Niger Delta, other tribally based organizations and actors have emerged over the years, including MEND (Movement for the Emancipation of the Niger Delta), often employing different (and sometimes violent) tactics than the Ogoni.

As with any war, women and children often pay the highest price and Saro Nkesi, now living in Virginia, has taken it upon himself to assist with their needs as president of the GIA Project Foundation, Inc. He said he is still actively involved with MOSOP and uses his U.S.-based foundation to raise the money he sends to Nigeria for “the children who lost their parents, the children who are not able to afford to go to school … for the widows who have lost their husbands.”