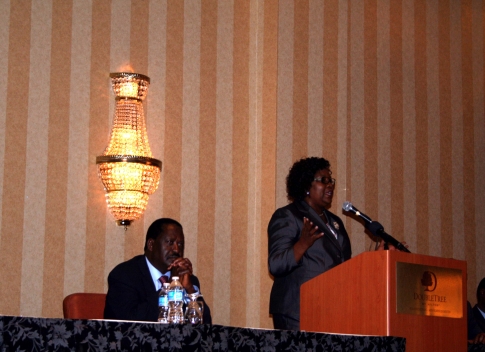 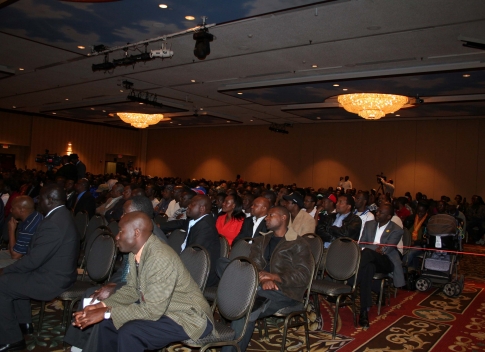 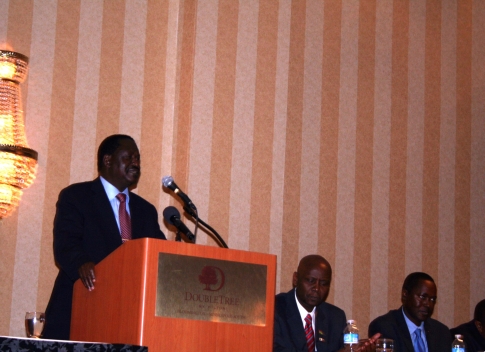 BLOOMINGTON, Minn – Prime Minister Raila Odinga of Kenya has shot down calls by Kenyans abroad for the creation of a ministry in charge of Diaspora affairs. Instead, the prime minister said the Diaspora desk in the Ministry of Foreign Affairs will be strengthened.

The prime minister made the remarks when he addressed about 700 Kenyans that packed a ballroom at a local hotel here.

Mr. Odinga said the new constitution the country adopted last year places a limit on the number of ministries that can exist and besides government was “already too big”.

After many years of successfully lobbying for dual citizenship, the Kenyan Diaspora has slowly taken up the cause of a ministry dedicated to them as the next big challenge.

The prime minister however did reveal that a voter registration exercise for the Diaspora is on a pilot stage at the Kenya High commission in London and that Kenyans abroad should ready themselves to vote in next year’s general elections.

The prime minister was in the US for an official visit to the United Nations for a Horn of Africa Crisis meeting where he presented the report of the “Nairobi Declaration” following a meeting of the East African countries. “I am happy to report to you that the UN adopted the report”, he said.

The prime minister who has had an “on again and off again” type of relationship with Minnesota Kenyans was making his first visit to Minnesota as prime minister. He was last here in February 2007 for a campaign stop, just months before the disputed December 2007 general election that plunged Kenya into violence.

He has come full circle with Kenyans in Minnesota. He was met with a hostile crowd in 2000 during his “cooperation years’ with then president Daniel Arap Moi. By 2007 when he visited again, he was back in the good books of the predominantly pro-reform Kenyan crowd that resides here. Among his critics at the Town hall was one Judy Onsomu who nevertheless said she would keep an open mind and hear Mr. Odinga out.

A noticeable difference with this visit was the Secret service protection that he enjoyed which prevented the backslapping, vigorous handshaking and photo opportunities that a Raila visit provided in the past.

The meeting got off to an inauspicious start. Advertised on the Kenya embassy website with a start time of 1:00 P.M., the meeting did not get underway until two hours later. When it got underway, speeches from numerous local personalities as well as three members of parliament in the prime minister’s delegation took another two hours. With the ‘Town Hall’ meeting advertised to end at 5:00 P.M., it was not until 5:10 P.M., that the prime minister took to the podium to address a now restless crowd.

After giving a laundry list of the accomplishments of the coalition government he is a part of with President Mwai Kibaki, the prime minister seemed to be in his element when he segued into what many in the audience believed brought him to Minnesota – next year’s general elections. “He only came here to campaign period” declared Ali Mohammed, a nine year Minnesota resident from Kenya, as he waited an agonizing two hours for the meeting to begin.

To that effect, Mr. Martin Ogindo, the Member of Parliament for Rangwe constituency who was in the prime minister’s delegation, had set the tone for him. MP Ogindo told the audience that “his people” had prayed to God for PM Odinga to “get a promotion” and the “almighty instructed us to go forth and vote accordingly”, he said to sustained laughter from the audience.

Mr. Odinga likened himself to a pilot in a plane on the runaway about to take off, with the plane being Kenya in this instance. He dismissed as irrational the fear some Kenyans have of a Luo president “I do not want to be president for the Luos but for all Kenyans”, he told a cheering crowd. He said Luos are Kenyans like everyone else. Mr. Odinga who represents Nairobi’s Langata constituency in parliament said the area is one of the most cosmopolitan in the country “and all those people have voted for me.”

“We are not crooks”

At one point, Assistant Minister Richard Onyonka, who commanded the podium for a period of time tried to explain the reasoning for Kenyan members of parliament not paying taxes. After proclaiming he was a product of the Diaspora, he used the America is a democracy argument as the now exasperated crowd got ready to shout him down for what they called “lame excuses”.

He told the crowd that the MPs have been misunderstood and that the country including the Diaspora should look at it from their point of view “as we are not crooks,” drawing derisive laughter from sections of the audience.
Another Member of Parliament, Mr. Hussein Ali of Mandera East looked on quietly as Mr. Onyonka made his case.

If there was a low point in the ‘Town Hall’ meeting other than the late start, the Onyonka explanation on MPs nonpayment of taxes was one of them. The other was an attempt by the local organizing committee to redefine a Town Hall meeting as Kenyans here have come to understand it in the American context and from previous such meetings.

By the time the question and answer session came around, more than an hour after the meeting was supposed to have ended, the audience was quickly told that time constraints would not allow for “many questions’ said Mr. Onyonka. Additionally, the audience was to limit their questioning of the prime minister to the themes that were projected on the PowerPoint in the hotel ballroom screen. The themes included among others security and agriculture.

In the intervening period as the Q & A format was being discussed at the high table, an impromptu Harambee (fundraiser) for Mauryn Masire Moore, a Kenyan stabbed to death by her Liberian husband in Minnesota, was contemplated. The local community is planning to send her body to her parents in Mombasa.

The fundraising idea was quickly discarded but the disarray along with the Q & A format disgusted enough of the audience for almost a third of them to empty the ballroom. Some were already running late for evening work shifts.

The prime minister however gave a donation of $2,000 towards the harambee to be held later. The MPs and civil servants accompanying him gave $100 each.

Making her first visit to Minnesota, at the urging of her “Facebook friend” was Mrs. Ida Odinga, wife to the prime minister. Mrs. Odinga who received loud applause from the ladies in the audience gave brief remarks. Saying she did not want to make a long speech as “kazi yangu ni kuchunga mzee (my role is to take care of my husband)” she nevertheless shared the audience the various community development efforts she is involved with.

Kenya’s Ambassador to the United States, Mr. Elkanah Odembo, accompanied the prime minister to Minnesota. The ambassador said that in the past, a lack of institutions and structure has been a hindrance to engaging the Diaspora in “meaningful ways” but that the new constitution the country adopted “has changed that”.

Mr. Odembo said that should the Kenyans in the U.S. be constituted as Kenya’s 48th county, it would be the “most affluent county”.