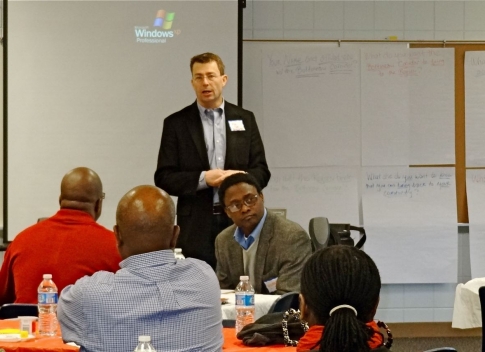 Over 50 people gathered on February 21 for the African Career, Education & Resource, Inc.‘s (ACER) Community Leader Forum to learn details of the Bottineau Transitway project and discuss how to become engaged in the process. ACER marked the launch of its “Making Transit Meaningful” project with this forum that brought ethnic minority leaders of various community organizations and faith-based groups together with elected officials and staff from Hennepin County and the City of Brooklyn Park.

In opening remarks, Hennepin County Commissioner Mike Opat spoke about the importance of getting engaged in the Bottineau Transitway (County Road 81) planning process. He encouraged attendees to reach out to their legislators and advocate for more support for the project, in anticipation of the positive types of transit-oriented development that comes with a project of this magnitude. Brooklyn Park Mayor Jeffrey Lunde welcomed attendees to the City of Brooklyn Park and expressed his support of ACER’s efforts.

The facilitator, Tene Wells, set the upbeat tone of the forum by encouraging the leaders to use the opportunity by contributing their “best thinking” and ideas. Presenter Joe Scala, of Hennepin County, gave a regional transportation overview and reviewed plans for the Bottineau Corridor, while Veronica Burt, of Just Equity, shared her experiences as a community organizer and the strategies she has used to engage with and advocate for the Rondo area community around the Central Corridor. In two breakout sessions, participants spoke about their dreams, aspirations, and apprehensions, regarding the proposed transit project, and the opportunities and challenges involved with engaging their constituents. Many complained about the technical nature of some of the materials presented and requested that it be translated into a more simplified version.

Through feedback forms, participants contributed their comments to be included in the formal Bottineau Transitway Scoping Documents. The project team is gathering input from the community about the scope of issues to be studied during the Bottineau Transitway Draft Environment Impact Statement process. The scoping period closes on February 17, 2012.

Overall, leaders were excited to become engaged with the Bottineau Transitway project, and more than half signed up to participate in the next event being planned by ACER. On Saturday, March 24, community leaders will be taken on a Guided Mobile Tour of the Bottineau Transit Corridor and the Hiawatha Corridor, to experience riding a Light Rail train.

ACER was among 10 community-based organizations that received funding from the Corridors of Opportunity Policy Board of the Metropolitan Council, through the US Department of Housing and Urban Development, to ensure that underrepresented communities along transitway corridors, in the metropolitan area, are involved in the decision making process. With its project, ACER plans to connect with African immigrants, African Americans and other minorities through a series of community forums, open houses, and other evidence-based methods.

According to Wynfred Russell of ACER, his organization will partner with the City of Brooklyn Park to identify and engage this population to become actively involved. The goal is to move underrepresented communities from a lack of basic awareness to a state of informed and engaged community action as it relates to community input and impact along the Bottineau Corridor. ACER’s efforts will focus on segments of the corridor affecting Maple Grove, Osseo, Brooklyn Park, New Hope, Crystal, Brooklyn Center, and Robbinsdale.