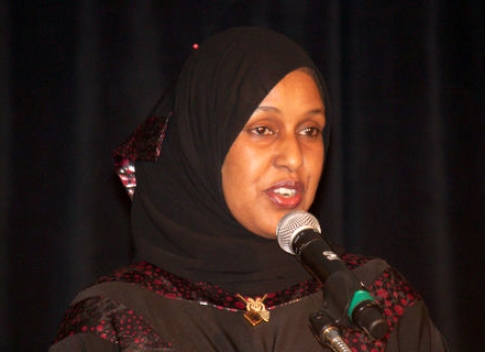 BLOOMINGTON, Minn – Northern Kenya Education Trust (NoKET) kicked off its United States launch in Minneapolis on May 11th in its quest to promote the quality of education for girls in northern Kenya during a dinner fundraiser at a local hotel headlined by US congressman, Keith Ellison of Minnesota’s 5th congressional district.

NoKET is an independent trust fund whose works covers the counties of Turkana, West Pokot, Baringo, Samburu, Isiolo, Marsabit, Mandera, Wajir, Garissa, Tana River, Lamu, Kajiado and Narok: regions with the lowest level of educational achievement. NoKET’s involvement in promoting a quality education birthed in 2006, but it was officially registered in 2010.

The launch brought together a delegation of civic leaders from Kenya including the Minister of State for the Development of Northern Kenya and other Arid Lands, Mr. Mohammed Ibrahim Elmi who also serves as the Member of Parliament for Wajir East constituency in the Kenyan parliament. The ministry he heads was created in 2008 by the current coalition government in Kenya because of the low development indicators northern Kenya has exhibited over the years.

NoKET hopes to establish a strategic partnership with organizations with a similar vision according to its trustees who were at the US launch. The trust fund is supported by organizations such as UNICEF, Imperial Bank and the Ministry of Education. UNICEF- Kenya was reported to have given NoKET $100,000. But the trust fund targets to raise $14 million and to gain a long term relationship with the Diaspora to improve the quality of education.

Though the US launch event required a steep $100 per person, well over 300 people filled the room to witness the night, and some even spilled into the halls. NoKET did not fall short when its trustees and organizers presented re-known leaders such as Congressman Rep. Keith Ellison, Kenyan Ambassador to the U.S. Elkana Odembo, Cabinet Minister, Hon. Mohamed Elmi and Amina Mohamed. The ambassador was in town already for a number of days primarily to keynote the annual Books for Africa fundraiser luncheon.

“Illiteracy is not an option,” UNICEF and NoKET’s trustee Ms. Mohamed said in an interview with Mshale, in assessing the current generation and the public’s concern to elevate educational levels in Kenya’s northern region. Mohamed who is also the co-founder of the trust fund, set the tone of the evening for her male trustees when they began to reference back to her speech and facts as they gave their remarks.

Congressman Keith Ellison, popularly referred to as “Africa’s Friend” by Kenya Diaspora leaders in Minnesota took the stage as the program’s keynote speaker. Despite the Congressman’s strong support among the Somali community in Minnesota, he strongly highlighted the relationship between Kenya and Minnesota. “Kenya and Minnesota have an enduring relationship,” he said. “I urge people to be engaged and participating in the process of making good things.”

Applause and enchantment swept through the room as the congressman displayed his humor to the audience, but it was obvious that he was deeply concerned about safety, and NoKET’s mission to slain the challenges of receiving a quality education for girls in Northern Kenya.

The girls’ images became a reality when Mohamed conveyed in depth stories of the nine girls out of the 433 NoKET serves. Young innocent faces with brief profiles were shown on the overhead projectors to capture the attention of the convinced attendees. Even though Ms. Mohamed mentioned her idea to bring one of the girls to the U.S. launch, keeping the girls in school is NoKET’s mission. “The education of a girl affects the surrounding of a home. We really have a responsibility to keep them in school.”

Though Mohamed announced the trustees plan to include boys into the program, a section of her speech that echoed through the room was when she said, “For 15 years a girl from Northern Kenya did not graduate from a university.” Mohamed began to collect facts after she realized being the only woman in her careers. “I realized I was alone in conferences and meetings. I was motivated to uplift women through education.” A closing remark that brought cheers and applause was when Ms. Mohamed assured supporters of NoKET that the organization was free from bureaucracy, a point even the Kenyan Ambassador to the U.S. strongly emphasized.

“We are investing in the Diaspora to help,” she said. “We want to assure you that we are not raising money for politicians.”

Odembo’s clear addition to Mohamed’s powerful remark was when he said, “It does not matter what political party we belong to if girls are not going to school.”

U.S. organizations such as Books for Africa (BFA), a nonprofit organization that ships donated books to children of Africa came forward to partner with NoKET. Books for Africa is the largest shipper of donated school textbooks to Africa. In addition to primary and secondary schools, institutions such as Kenyatta University, Daystar University and the Kenya Institute of Management have been recipients of textbooks from the organization. NoKET did not only gain the friendship of the 24-year-old BFA, but it also attracted many who made pledges to contribute to the program.

“If we get books to the girls in Northern Kenya that will be a great partnership,” said Norman Linnell, president of the board of directors at Books for Africa during remarks to the audience at the launch.

Another enthusiastic supporter at the launch was Judge (ret.) LaJune Lange, president of the International Leadership Institute (ILI). Lange has worked on the ground North Eastern Kenya to advance opportunities for the girl child with Woman Kind, an organization that sends volunteers and provides training programs.

Speaking with Mshale during the launch Lange said “We will be travelling again this summer to the region and working in the goals of NoKET along Woman Kind. We will provide capacity building for the teachers and education.”

Many attendees like Paul Morande were delighted to be present at the NoKET US launch. It was clear that NoKET marked the coming together of United States, Kenya and Somalia. “This is a noble event,” said Morande, as he stood up for the two countries’ national anthems.