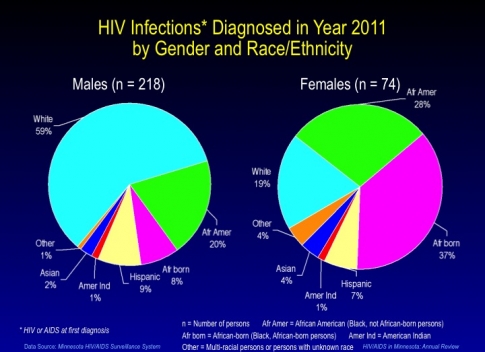 Ethnic community leaders across the Twin Cities say they are getting tired of hearing more bad news about the rise of HIV/AIDS infection in their communities. With more than three decades into the HIV/AIDS epidemic, rates of new infections in Minnesota overall have slowed, but HIV incidence among communities of color is rapidly increasing, according to a new report released by Minnesota Department of Health (MDH).

HIV cases among all women rose 9 percent with increases seen among African-born, African American, Latina and Asian women. Health officials say among women of all ages with known risk factors, “heterosexual sex was the leading risk factor, accounting for 98 percent of cases. Women of color accounted for 81 percent of all new cases reported among women, even though they make up only 17 percent of the general population.”

The report, which is based on one year of data collection, shows a total of 292 new HIV cases in 2011 compared with 331 in 2010, does not reveal a dramatic increase in the rate of HIV infection in the larger state population.

But it cements a picture of an epidemic that disproportionately affects ethnic minority community groups, where African immigrant males saw a 31 percent increase, while Asian males’ case count remained the same in 2010 and 2011.

“While the overall drop in cases is encouraging, it’s concerning that we continue to see increases and higher rates among some of our communities.” said Peter Carr, manager of the STD and HIV Section at MDH.

He said new HIV cases remain concentrated within the Twin Cities metropolitan area at 86 percent with an 11 percent increase reported in the suburbs in 2011 as compared to 2010, primarily due to an overrepresentation seen among women.

Additionally, ethnic community health workers point to a high degree of gender inequality, poverty and ambivalence over sexual issues within the minority community as major factors in the spread of the disease.  “Negotiating gender roles in the context of sexual relationships is an ongoing challenge,” said Karvee Kawalawu, a health educator at Annex Teen Clinic in Robbinsdale, a first-ring Minneapolis suburb.

“There is clearly a problem when you have a 16 year old girl dating a 28 year old man. The power dynamic in such relationships is unbalanced; he has the power to control when, where, or whether safe sex is practiced or not,” she said.  “Many young women are having unprotected sex with men in exchange for a meal at Red Lobster restaurant, earning them the dubious title in the community of the ‘Red Lobster girls.’ These girls and the men that prey on them don’t have any sense of the consequences of their actions to them and the community,” said Kawalawu.

She said another reason an increased number of youth are getting infected is the lack of Education. “Most youth are being misinformed of the transmission of HIV/AIDS. There’s so much mythological information that they believe which is also a factor.”

The reasons why the ethnic community in Minnesota is seeing a sharp elevation in new HIV diagnoses are complex and varied, said Maria Sarabia, an urban community health expert and researcher who studies minority-focused solutions to public health issues.   ”The fields of medicine and science have made great advances in creating products that help manage HIV.  The HIV ‘dialogue’ for a lot of people, has shifted slightly from prevention to management,” Sarabia said.

She added that this shift creates a sense of hope, and it is a good thing for so many people of color living with HIV. We hear success stories about ‘Magic Johnson’ living with HIV and still being happily married.

Sarabia, who specializes in using storytelling as intervention and engagement vehicles within communities of color, said the ads that promote HIV therapy drugs normalizes being HIV positive.  “However, when we assess the human psyche – there may be folks that feel like acquiring HIV is not that bad, and can be managed. This thought process could provoke people to take more risks, and engage in unprotected sex,” she said.

A little over 20 years ago, after his jaw-dropping announcement and subsequent retirement at 32, Earvin “Magic” Johnson’s doctors say he is in good health and comfortably managing HIV with “a daily regimen of drugs and exercise,” according to published news reports.

Yet health officials worry that Johnson’s health and physical outlook could encourage complacency, and they see

the milestone of his historic announcement as a call to renew dedication to “consistently practicing safe sex, including using condoms and limiting the number of sexual partners.”

Health officials also noted that getting tested for HIV and getting into treatment if infected is now more important than ever. People in treatment have shown a 95 percent reduction in HIV transmission rates when compared to infected persons who are not in treatment.