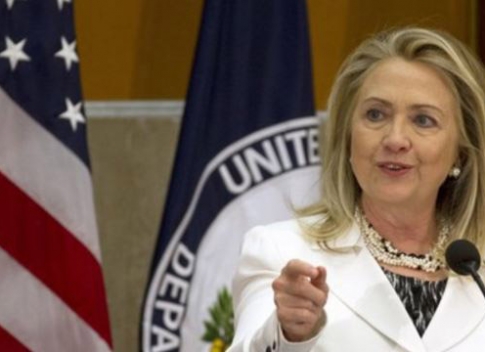 Secretary of State Hillary Clinton recognized on Wednesday the crucial role of diaspora communities in national and global development efforts, emphasizing their potential to solve problems in their home countries and spur U.S. economic growth.

“By tapping into the experiences, the energy, the expertise of diaspora communities, we can reverse the so-called ‘brain drain’ that slows progress in so many countries around the world, and instead offer the benefits of the ‘brain gain,’” she said at the opening ceremony of the second annual Global Diaspora Forum.

Speaking to about 500 diaspora community leaders, advocates and senior U.S. officials, Clinton cited the support of Syrian Americans and organizations as an example of how the Syrian diaspora serves as a link between the international community and opposition activists to address the ongoing civil uprising in Syria.

“I want to recognize the work of Syrian diaspora organizations to shine a light on what is happening in Syria and to carry the concerns of the Syrian people not only onto the pages of American newspapers, but also into the halls of Congress,” she said. “They’re helping to collect funds and humanitarian assistance for Syrians who are suffering because of this terrible violence.”

This year’s forum, titled “Moving Forward by Giving Back,” focused on how to foster partnerships between diaspora communities and the U.S. government to address global challenges. The two-day event also drew members of the ethnic press— including Ethiopian, Filipino, Haitian, Latino and African-American news outlets—from the nation’s capital to Virginia, Maryland and New York.

Speaking about her recent trip to Asia, Clinton told the story of a Vietnamese-American entrepreneur who brings famous American brands into the Vietnamese market, generating thousands of jobs and in the process bringing Vietnam and the United States closer together.

“That’s one way the diaspora has and continues to make a difference, but it’s certainly not the only way,” Clinton said.

She added that the International Diaspora Engagement Alliance (IDEA)— a network of private sector, nonprofit and government agencies that she launched last year— has also expanded its initiatives. One of these is a collaboration between Canadian, U.K. and U.S. governments to finance innovative business proposals from the Caribbean diaspora in order to generate employment and increase economic growth in the Caribbean.

Similar efforts by the communities are taking place in Liberia, Tunisia and in Latin America.

Thomas Debass, director for global partnerships for the State Department’s Global Partnership Initiative, was hopeful about the direction of the International Diaspora Engagement Alliance.

“Through IDEA, we’re evolving and recognizing diversity, utilizing that asset and our American diplomatic relations around the world,” he said. “We’re creating a footprint and certainly taking the diaspora’s commitment into action to benefit both their home countries and the United States.”

Debass admitted that the initiative is a work in progress, but said he was confident that the alliance would continue to carry out its goals around diplomacy, innovation and economic development.

“We’re not at the promised land yet, but we know that we are on the right track to advance causes that we care about,” he said.

Meanwhile, on the home front, Clinton praised the ways immigrant communities have revitalized American cities like Baltimore, Md., which may be losing its economic luster due to dwindling populations. When cities struggle, she noted, the presence of immigrants replenishes their strength and vitality.

“The fact is that the United States has always benefited from the influx of talent and dynamism that diasporas of all kinds bring to our shores. And so they are reaching out and inviting— opening the doors of that venerable American city to immigrants from everywhere,” she said. “We are well aware that our diversity is one of our greatest assets in the 21st century.”