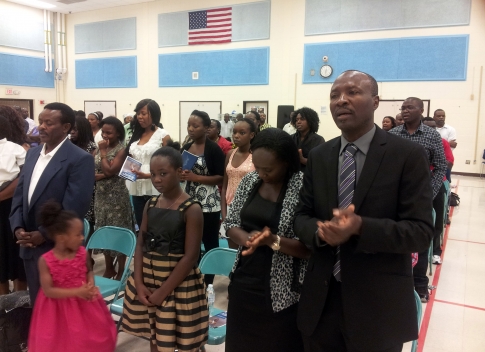 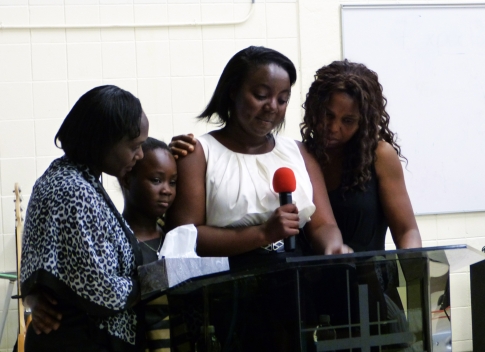 He was father to prominent Kenyan-American, Paul Morande, on whose account most came to the memorial service as many did not know Mr. Onyambu personally. Paul Morande is the Executive Secretary of the Minnesota Kenyan International Development Association (MKIDA).

“My grandfather’s favorite color was blue,” his granddaughter Sandra Morande, a junior at Duke University said during the service. “He made me realize where my father’s (Paul) sense of service to the community came from.” A tearful Sandra then gave a moving eulogy of her grandfather narrating the time three years ago when the late Onyambu visited them in their Twin Cities home. “I never had a relationship with him before that”, she said, concluding that his visit was the start of something special.

Laughter seemed to prevail over tears however as community members who came to console the Morande family chose to remember the good times they had whenever they crossed paths with the late Mr. Onyambu.

Several of Paul Morande’s family spoke at the memorial and thanked the community for their support. They said their late father was a great orator and lover of “emebayeno” (proverbs in the Gusii language) who would regale you with endless stories.

Mr. Paul Morande was among those who recalled the good days with his late father. He described his father as enterprising and how he and his siblings were “raised in the back of the store” drawing laughter from the audience as he described the shops his late father had back in Kenya and how the back of the store was the living quarters for the family.

Pastor James Maina of Destiny Faith Ministries delivered the sermon. He preached from the book of Mark 5:25 about the woman who had been hemorrhaging for twelve years and who physicians could not cure. Upon hearing about Jesus, she believed that if she could touch the garment Jesus was wearing, she would be healed which indeed she was as her hemorrhaging stopped immediately after touching Jesus’ cloak.

Pastor Maina told those at the Morande memorial to have faith similar to that of the woman and that “when all the doctors fail, come to Dr. Jesus.”

Mr. Paul Morande and his family are scheduled to leave for Kenya on Monday, August 6 for the funeral.