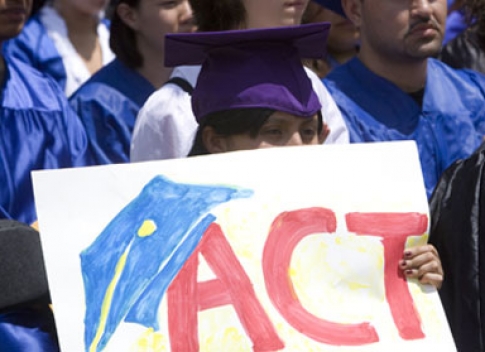 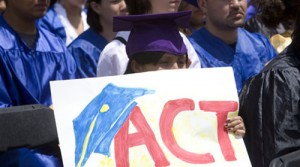 NEW YORK, N.Y. – Thousands of young undocumented immigrants formed long lines at help-centers and churches across the United States last Wednesday to start their process of gaining temporary legal status, under President Obama’s new program to defer deportations for many brought to this country as children.

But others are purposely delaying their applications for the deferred-deportation program — at least until after the upcoming U.S. presidential election. The program delays deportation for two years (potentially renewable) for young people brought to the United States before they were age 16. The new immigratin policy only applies to those who were 30 or younger by June 15, 2012.

But many undocumented immigrants postponing applications want to be sure first that President Obama gets reelected. That would provide them some assurance the deferred action program will not be discontinued were he to lose, thus placing them and their families in jeopardy of being deported.

“Look, if Mitt Romney wins, he may revoke this program,” said Andres Zamora, 20, an undocumented college student from the Bronx, N.Y. He asked to be identified only by his mother’s maiden surname. “If that’s the case, I will be scared to come out and apply [for a deferral]. It would just make me and my parents more vulnerable.”

Andres, a native of Guatemala, came with his parents to the United States via Mexico when he was seven. While his younger sister was born in New York and therefore a U.S. citizen, he and his parents remain undocumented and have no path to legalize their immigration status.

“It’s better to be careful,” he added. “What’s really a temporary relief could cause more harm than good in the end, right?”

Similar sentiments were posted by other young unauthorized residents on a number of websites tackling cost-benefit analysis of the Obama administration’s deferral policy, called the Deferred Action for Childhood Arrivals (DACA).

“I’ve been wrestling with the idea of applying now or after the election. I spoke with a lawyer, who suggested I should wait after the election because at any time DACA could be removed,” said one post on DREAM Act Portal.com, identified as bigdreamer2010. “I agreed that it’s possible for Mitt Romney to revoke it.”

DACA, through Obama’s executive order, could provide eligible undocumented youths to forestall removal from the U.S., as well as provide them a work permit. Some states would allow them to have a driver’s license. It is crucial for many to have transportation to jobs or school, without fear of a traffic stop that could result in deportation.

When the policy officially took effect on August 15, thousands of young unauthorized immigrants gathered in different cities nationwide for a daylong orientation about eligibility requirements and free legal services supported by immigrant-rights groups and some public officials.

In Chicago alone, about 5,000 undocumented youths were reportedly lined up that day at the Navy Pier, holding a numbered piece of paper and a folder of documents in their hands.

At St. Mary’s Church in New York’s lower Manhattan, about 1,500 undocumented youth, along with their family members and friends, showed up as early as 6 a.m. New York City Council Speaker Christine Quinn joined advocates and supporters to help the thousands gain an opportunity to live, work and get an education in this country.

However, Sarala, 25, an immigrant from South Asia, said in an interview that she is reluctant to apply for now. She said relatives raised concerns about what happened with the special registration program, known as the National Security Entry-Exit Registration System (NSEERS).

“It might be similar,” said Sarala, who volunteers for a community organization in the Jackson Heights area of Queens, N.Y.

She explained that a few months after the September 11 terrorist attacks, the Department of Homeland Security required certain immigrants of Arab and South Asian countries to register under the U.S. Patriot Act II. After families complied, some who overstayed their visas were placed under deportation proceedings.

“It’s hard to trust. It’s been very rough for my family,” she said.

Muzaffar Chishti, director of Migration Policy Institute’s (MPI) office at the New York University School of Law, noted that the deferred-action policy could, legally speaking, be discontinued if Romney becomes president — or even if Obama wins and decided to revoke or limit the policy.

“These are just guidelines issued by the Department of Homeland Security and not a statue enacted by Congress,” Chishti said in a phone interview. Ideally, these young immigrants would gain legal protection if the DREAM Act or a broader immigration reforms are passed, he said. But he believes it’s still favorable for affected youth to avail of the deferral program.

Chishti also said he hopes Romney, if elected, would opt not to reverse DACA.

“These young immigrants can work, travel and live a normal life, and their deferral can be renewed after two years. It’s going to be like the Temporary Protected Status (TPS) given to Ecuadorians, Hondurans and Salvadorans since the 1990s,” Chishti said. “But at the end of the day, people make their own decision.”