Home Features Somalia to Minnesota: One immigrant’s perilous journey by land and sea 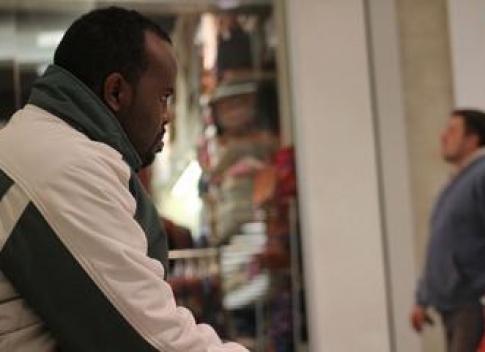 Abdullahi Elmi recently sat quietly at a Minneapolis coffee shop with a bright smile on his face. His eyes ran over the chatty young Somalis around him.

It was a weekday, and he expected them to be at work or in school. “What are they doing here?” asked astonished Elmi, who recently arrived in Minnesota through harrowing journeys on the deserted African borders and stormy seas.

If they came here through my route, they wouldn’t have wasted a second,” he said with the big smile now transformed to a loud laugh. “I would have been doing something useful with my time right now.”

Because of the protracted civil war in Somalia, Elmi’s dream of attending university faded when he graduated from a Mogadishu high school in 2006. Like many young Somalis his age, Elmi vowed to migrate to Europe for education and a better life.

For the first time, Elmi left Somalia in 2008 with a group of strangers, trusting his life with a smuggler to whom he gave $15 to get him to Djibouti, an East African country that borders Eritrea, Ethiopia, and Somalia.

On top of an overcrowded pick-up truck, Elmi traveled for days on the dry and dusty land between Somalia and Djibouti with only a 5 kg container of water in his hand.

People were literally sitting on each other,” he said of the 25 passengers on the vehicle, which was supposed to hold 10 people. There was no space to breathe. And the driver was driving like he didn’t care about their safety.

If you’re weak, you could get thrown off from the car,” he added, “and the driver would keep driving.”

A car in which a friend of Elmi rode overturned on the way a month before Elmi’s trip, with 30 people killed, his friend told him. The rest didn’t get an emergency response for weeks.

They had no food or water,” Elmi said. “They had to drink their urine.”

Every year tens of thousands of people, mostly young, migrate through this route, drawn by the promise of a life of contentment in Europe, according to a recent study, “Boat Ride to Detention: Adult and Child Migrants in Malta,” by the Human Rights Watch.

Most of these migrants, like Elmi, travel with little or no information about what they will encounter during the trip as they go through the borders of Djibouti, Eritrea and Sudan, which then connect to rickety timber boats in Libya with a dream to reach Europe.

Often times, however, they end up in indefinite detention in Malta, a tiny island in the Mediterranean between Libya and Italy, even though they don’t plan Malta as their destination — but aim for European countries, especially Italy, the study said.

All I wanted to do was leave Somalia,” said Elmi, who would end up in a Maltese detention center. “I would never have taken the trip had I known what I know now.”

In Djibouti, Elmi was introduced to another smuggler, who took him on the top of a Jeep that sped fast on the irregular and dangerous deserted ground between Djibouti and Eritrea. He was dropped about 70 miles away from the Eritrea border.

There is the border,” Elmi said the smuggler told him. “He gave me names of men [smugglers] in Eritrea.” Elmi walked across the border with no map or navigation system. No person or home was in sight, and no food or drinks were in his possession.

Elmi finally arrived in Emkulu Camp Eritrea. The camp, which welcomed the first wave of Somali refugees 12 years ago, hosts about 4,000 Somalis, according to a 2008 report by the International Organization for Migration. He stayed in Emkulu for 10 days before he transitioned to a Sudan refugee camp, Shagarab, with the help of smugglers.