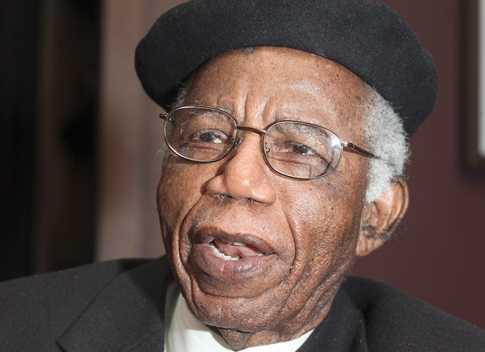 “The white man is very clever. He came quietly and peaceably with his religion. We were amused at his foolishness and allowed him to stay. Now he has won our brothers, and our clan can no longer act like one. He has put a knife on the things that held us together and we have fallen apart.” From Things Fall Apart (1958).

One of Africa’s literary giants, Chinua Achebe, has died after a brief illness, his publisher and agent said today (Friday, March 23). He was 82.

In a statement his family said: “One of the great literary voices of his time, he was also a beloved husband, father, uncle and grandfather, whose wisdom and courage are an inspiration to all who knew him.”

A statement from the Mandela Foundation in South Africa said Achebe passed away on Thursday and quoted Nelson Mandela as referring to him as a writer “in whose company the prison walls fell down”.

A car accident in 1990 left the author in a wheelchair and limited his travel.

“The world has lost one of its finest writers and Africa has lost a literary gem,” said Mike Udah, spokesman for Nigeria’s Anambra state, where Mr Achebe was born.

Apart from criticising misrule in Nigeria, Mr Achebe also strongly backed his native Biafra, which declared independence from the republic in 1967, sparking a civil war that killed around one million people and only ended in 1970.

The conflict was the subject of a long-awaited memoir he published last year, titled There Was A Country: A Personal History of Biafra.

In 2011, Mr Achebe rejected a Nigerian government offer to honour him with one of the nation’s highest awards, at least the second time he had done so.

South African writer and Nobel laureate Nadine Gordimer called the author the “father of modern African literature” in 2007, when she was among the judges to award him the Man Booker International prize for fiction.

But while he was widely lauded worldwide, Mr Achebe never won the Nobel prize for literature, unlike fellow Nigerian author Wole Soyinka, who became the first African Nobel literature laureate in 1986.

Mr Achebe was born the fifth of six children in 1930 in Ogidi in southeastern Nigeria, where his Igbo ethnic group dominated, and he grew up at a time of Christian missionaries and British colonialism.

In an interview with The Paris Review, Mr Achebe said that as his reading evolved, he slowly became aware of how books had cast Africans as savages.

“There is that great proverb, that until the lions have their own historians, the history of the hunt will always glorify the hunter,” he said.

“That did not come to me until much later. Once I realised that, I had to be a writer,” he said.

Achebe was born in Ogidi, Anambra State, on November 16, 1930 and attended St Philips’ Central School at the age of six. He moved away from his family to Nekede, four kilometres from Owerri, the capital of Imo State, at the age of 12 and registered at the Central School there.

He attended Government College Umuahia for his secondary school education. He was a pioneer student of the University College, now University of Ibadan in 1948. He was first admitted to study medicine but changed to English, history and theology after his first year.