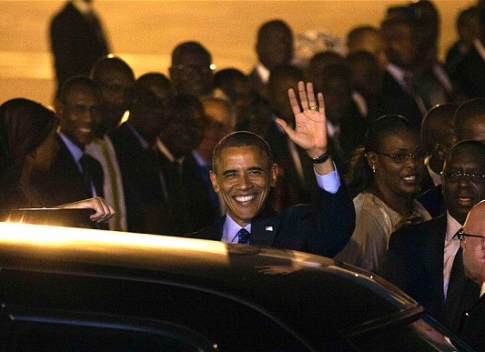 Almost four centuries after Africans started being shipped to North America as slaves, the first U.S. president of African ancestry will on Thursday visit an infamous embarkation point for those destined for lives in chains.

In his first – and, many Africans say, long-overdue – extended tour of the continent, President Barack Obama will focus on political and economic issues, but is also paying homage to a painful chapter in American history.

On the first leg of his eight-day visit he is taking his family to the House of Slaves, a fort built in the late 18th century on Goree Island, off the coast of Senegal, as a transit point for the human traffic and now a museum.

The visit will be a somber reminder of a shameful period in U.S. and world history and provide a powerful contrast between Obama’s stature as leader of the world’s most powerful nation and the historical status of Africans, once treated as property in the country he governs.

“We have moved from a society in which African Americans were not viewed as citizens, in which social, economic equality was not provided, to one in which we could elect an African American president,” said Junius Rodriguez, a historian at Eureka College in Peoria, Illinois.

“It’s a remarkable transformation that we’ve made.”

Many Africans feel a bond with Obama but have voiced disappointment that he has not engaged with the continent as much as previous presidents George W. Bush and Bill Clinton.

During his first term, Obama’s only African trip was a one-day stopover in Ghana and many Africans have been impatient for him to make an extended tour of the continent.