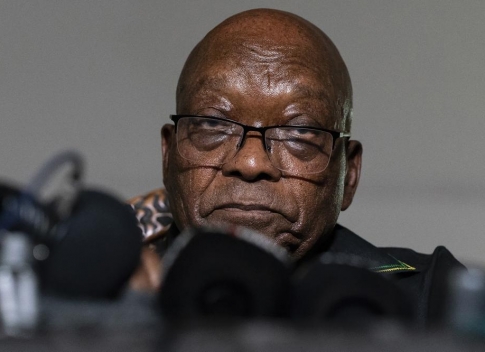 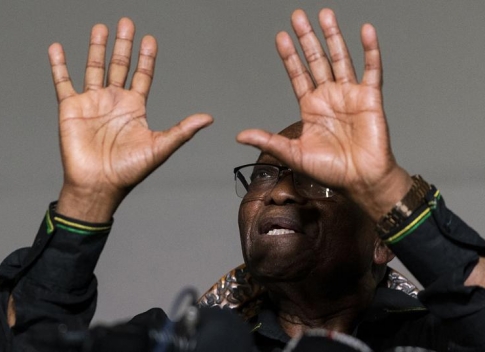 Just minutes before the midnight deadline for police to arrest him, Zuma left his Nkandla home in a convoy of vehicles. Zuma handed himself over to authorities to obey the country’s highest court, the Constitutional Court, that he should serve a prison term for contempt.

“President Zuma has decided to comply with the incarceration order. He is on his way to hand himself into a Correctional Services Facility in KZN (KwaZulu-Natal province),” said a tweet posted by the Zuma Foundation.

Soon after South Africa’s police confirmed that Zuma was in their custody.

Zuma’s imprisonment comes after a week of rising tensions over his sentence.

Zuma, 79, was ordered to prison for contempt because he defied a court order for him to testify before a judicial commission investigating widespread allegations of corruption during his time as the country’s president, from 2009 to 2018.

The Constitutional Court ordered that if Zuma did not voluntarily hand himself over to the police then the police should arrest the country’s former president by the end of the day Wednesday.

In a last-minute plea to avoid going to prison, Zuma’s lawyers had written to the acting chief justice requesting that his arrest be suspended until Friday, when a regional court is to rule on his application to postpone the arrest.

Zuma’s lawyers asked the acting chief justice to issue directives stopping the police from arresting him, claiming there would be a “prejudice to his life.”

He applied to the Constitutional Court to rescind his sentence and that application will be heard on July 12.

On Tuesday, his lawyers were in the Pietermaritzburg High Court seeking to stop the minister of police from arresting him until the Constitutional Court rules on his application. The regional court will rule on that application on Friday.

Political tensions have risen in KwaZulu-Natal province as a result of Zuma’s conviction, sentence and pending arrest. Hundreds of his supporters gathered at his home over the weekend and vowed to prevent his arrest, but they left on Sunday.

The judicial inquiry into corruption during his term as president has heard damning testimony from former Cabinet ministers and top executives of state-owned corporations that Zuma allowed his associates, members of the Gupta family, to influence his Cabinet appointments and lucrative contracts. Zuma refused to comply with a court order to appear before the commission, which brought the Constitutional Court to convict him of contempt and sentence him to prison.

In a separate matter, Zuma is standing trial on charges of corruption related to a 1999 arms deal, where he allegedly received bribes from French arms manufacturer Thales. His financial adviser has already been convicted and imprisoned in that case.

Zuma has had other legal woes. In 2005, he was charged with rape but was acquitted in 2006 after the court found the sexual intercourse was consensual.

Zuma bounced back from that to become president in 2009. But by 2018 mounting evidence of rampant corruption in his administration brought his party, the ruling African National Congress, to force him from office.

Although tarnished by scandal now, Zuma had built up a reputation as a staunch opponent of apartheid, South Africa’s previous regime of harsh white minority rule. He was jailed for 10 years at the Robben Island prison where political prisoners including Nelson Mandela and Walter Sisulu were held.

When he was released in 1973, Zuma left the country to continue his work in the African National Congress, traveling through countries like Swaziland, Zambia and Mozambique.

By the time South Africa legalized the ANC in 1990, Zuma was a high-ranking official in the party and was part of negotiating the political settlement that led to the country’s first democratic elections in 1994.

Zuma’s reputation in the new South Africa was further enhanced when he was deployed to his home province of KwaZulu-Natal where he helped to resolve political violence that was threatening to derail the country’s progress toward a democratic and non-racial society.

Zuma’s political reputation will be marred by the corruption scandals surrounding him, said Lesiba Teffo, lecturer in politics at the University of South Africa.

“It is very disappointing to see a man who has done so much for the country, a liberation hero, now reduced to zero,” said Teffo. “This is a man who fought hard for the liberation of this country, but like many African leaders in our continent, he fell at the altar of money.”