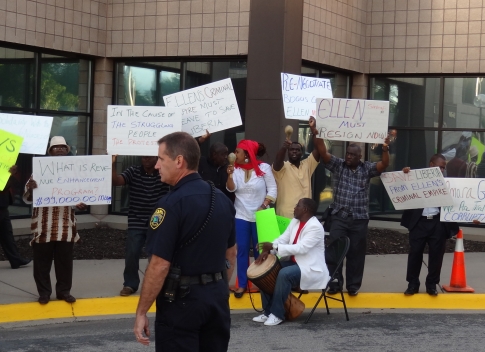 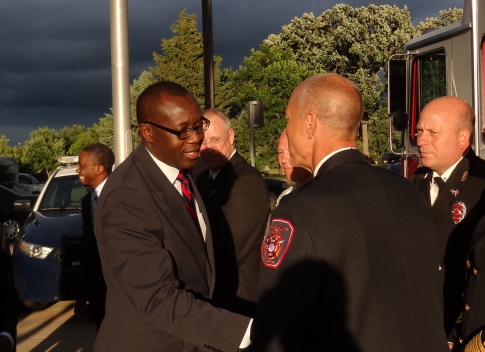 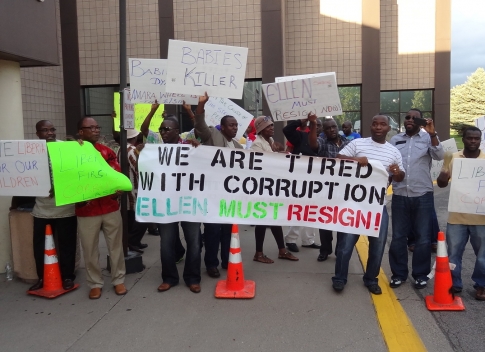 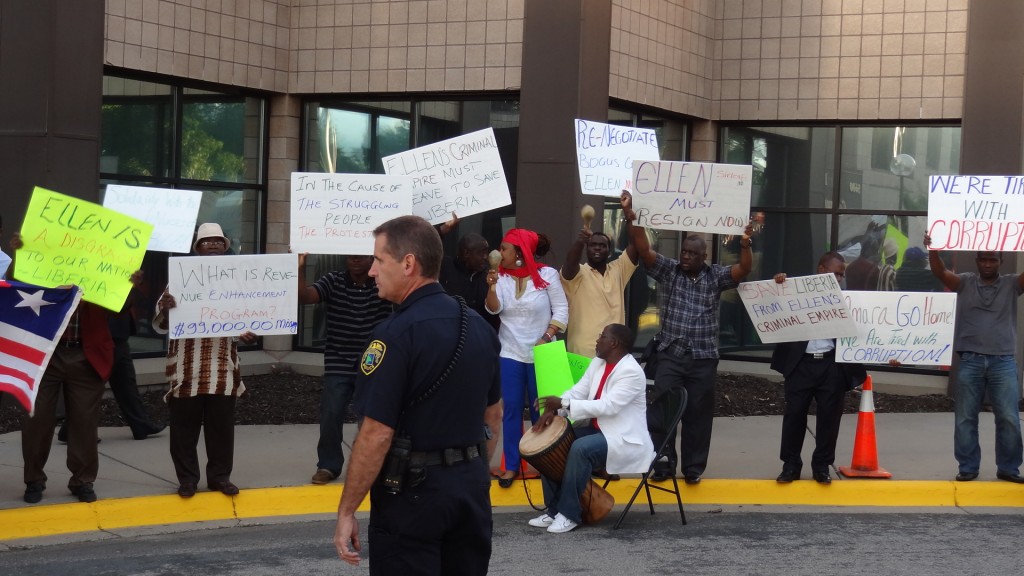 After weeks of contentions and bickering surrounding the decision of the Organization of Liberians in Minnesota – OLM – the lead community organization, to invite finance minister Amara Konneh to keynote its official July 26th Independence Day program, the event was held without incident and went well into the night.

Minister Konneh, who arrived at the event center in a two-car SUV convoy, was flanked by six men who appeared to be plain-clothes private body guards. Smiling and shaking hands with the City of Brooklyn Park officials who had assembled to greet him in front of a brand new fire truck they later presented to Liberia, Konneh walked through two groups of opposing Liberians chanting pro and contrarian slogans.

A heavy police force separated the groups. One made up of supporters, wearing white tee shirts, and the other of a group calling itself the Movement of Liberians Against Corruption (MOLAC). Minister Konneh turned to the more than 50 protestors of MOLAC, who condemned his visit because of what they called “corruption and bad governance” in the Johnson-Sirleaf administration, and waved. They responded with boos and jeers, while pounding their drums and waving signs some of which read: “Amara Go home. We Are Tired With Corruption!”

The group’s co-organizer, Seyon Nyanwleh, issued a statement accusing Konneh of being a “key official of the Liberian Government and a close ally of President Ellen Johnson Sirleaf,” under whose administration Liberia has received the dubious recognition of being the “most corrupt country in the world,” questioning where a $13.3 million grant to support maternal health from the European Union has gone, when all of the hospitals where Konneh said the money went have denied ever receiving the funds.

Konneh acknowledged the group’s concerns and even cheered their courage to join the fight against corruption. But the minister’s speech drew mixed reactions from different audiences in Minnesota—a sign that Liberian-Americans’ frustrations with political leaders in their homeland to address corruption and lack of public services are deepening. People said they expect the government to do more to improve the lives of average Liberians.

Konneh spent a good part of his hour-long speech referencing his family history. And there is a good story there. He built on that past by pointing to how Liberia is made up of immigrants and how the values instilled in him by his Guinean grandfather helped shaped his future. Standing relaxed in front of a packed hall, his message was poignant and somewhat reflective: “The Mandingos and Fulanis, as you know, are spread across West Africa. Our population is denser in other countries such as Guinea, Ivory Coast, Senegal and Mali – that’s why we are not considered Liberians. But equally so, the Lormas and the Kpelles, Krus and Krahns are regional groups.”

Many attendees told Mshale News that his speech was “all over the place” and short on substantive policy issues to address the myriad of problems facing the post-war county. They said it instead sounded more like a plea for acceptance of his ethnic Mandingoes. However, midway into his address he found an opening to draw a clear distinction between the Johnson-Sirleaf administration and previous governments.

“We have brought about a quiet revolution in the Liberian government. Today, there is increased voice and accountability than ever at any time in the history of our country. There is more political freedom than at any time of our history,” he said.

Later at an interactive town hall forum on Saturday, intended to allow Liberians to engage Konneh directly, the issue of the EU $13 million health sector donation was front and center.

The minister acknowledged he made some mistakes in handling the question of the money when it first erupted. He said he should have sat down with Ministry of Health officials to clarify the procedure used to allocate the funds to hospitals and health centers around the country.

He admitted that graft is widespread in Liberia and a major distraction but deflected all criticisms directed toward the executive branch, adding, “I don’t have control over corruption in the government.”

Even though the Transparency International 2013 Global Corruption Barometer that the minister was talking about named the National Legislature as one of the most corrupt entity in the country as claimed by 96% of Liberians interviewed, Konneh refused to mention the legislature in his response to a question about the source of corruption in government. He instead joked that he didn’t want to say anything for fear of it being interpreted as an indictment of the legislature for corruption because budget hearing was coming up and he didn’t want members of the legislature to retaliate and slow passage of his budget.

“He seems well-meaning,” said Edward Carter, former mayor of Bentol City and a historian who co-moderated the forum. “The system may not be giving him the latitude to fight corruption and for him to do what he would like to do to put government’s fiscal house in order.”

He further noted, that despite the controversy, “Konneh articulated the development policy of the government, which in my estimation, when implemented could put Liberia on the path to sustainable growth and development.”

But others took a more circumspect position when describing the minister’s performance at the open town hall meeting.

“I needed to hear some specifics on fiscal policy that would dampen the current economic hardship in the country. How do we reduce the high unemployment rate? What is the government doing to spur economic growth?” asked Milton Massaquoi, branch manager at a Wells Fargo Bank in suburban St. Paul. “I was looking to hear about policies to support small business development and alleviate the jobless rate.”

The controversy to select Konneh as guest speaker and the boisterous noise from protesters outside the hall where he spoke on Friday did little to discourage the more than 400 people from attending the Independence Day program and over 100 who participated in the town hall forum the following day. But many guests complained that the events were poorly organized and reflected negatively on the image of the Liberian community in Minnesota, one of the largest in the Diaspora. The OLM sent out a “statement of apology” Tuesday for “not delivering on food services” during the July 26th program that people paid $20, $35, and $50, respectively, to attend. The organization promised an investigation into what happened and said it will host a free community picnic on August 24, Liberia’s Flag Day.