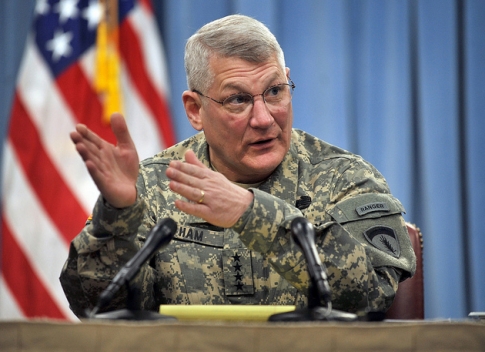 The Office of Net Assessment is an internal Pentagon think tank that tries to anticipate future needs through a series of studies and war games. Created in 1973, it has been run by the same person, 92-year-old Andrew Marshall, since its beginning. Marshall, in turn, is a disciple of longtime military strategist Fritz Kraemer, a key influence on former Secretary of State Henry Kissinger, former Defense secretary Donald Rumsfeld and former vice president Dick Cheney.

Africa has turned into one of the United States’ largest policy challenges during the Obama administration, including the rise of al-Qaeda-connected groups in the Sahel, the 600-mile-wide band of grassland and desert that stretches from Eritrea to Senegal. In recent weeks, for example, the Pentagon has asked for trainers to teach Tuareg, the language spoken by nomadic tribes in northern Mali. A base for unmanned drone aircraft opened in neighboring Niger in February.

Booz Allen, one of the military’s largest contractors, is a longtime ONA contributor. Contract records show the company received a $45 million contract from ONA in July 2007 to perform a variety of studies.

While Democratic and Republican administrations come and go, ONA and its team of outside advisers remains the same. Contract records show the office relies on studies from outside contractors at firms such as Booz Allen, Science Applications International Corp. (SAIC) and Scitor Corp., universities and think tanks, such as the Center for Strategic and Budgetary Assessments and the Hudson Institute.

Many of the ONA advisers are alumni of the office, such as Andrew Krepinevich of CSBA and several staff members of the Hudson Institute. Others, such as Stephen Cambone, the former undersecretary of Defense for intelligence, were key members of the Bush administration’s Pentagon team. Cambone is the head of Adirondack Advisors, a McLean, Va.-based firm that received a $270,000 contract from ONA in May, according to Virginia corporate records and Pentagon contract documents.

ONA is one of the contributors to the Pentagon’s Quadrennial Defense Review, a document that comes out every four years in order to help shape overall military priorities. The next review is scheduled for release early in 2014.