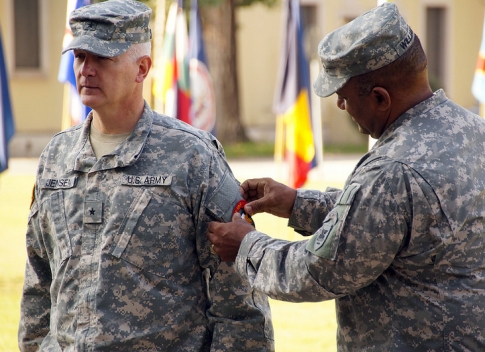 An Apple Valley Minnesota resident, Brigadier General Jon Jensen, has taken over an additional role as the Deputy Commanding General for U.S. Army Africa. Jensen is the Director of the Joint Staff for the Minnesota National Guard and will continue in that role in addition to his new responsibilities at U.S. Army Africa.

U.S. Army Africa, also known as the Ninth U.S. Army is based in Vicenza, Italy. It states as its mission as “employ(ing)  Army forces as partners, builds sustainable capacity, and supports the joint force in order to disrupt transnational threats and promote regional stability in Africa,” and its vision as “a trusted and respected partner, achieving long-term strategic effects in Africa.”

Some of the publicly available information on activities that U.S. Army Africa has been involved in include In July 1994 when it deployed to Entebbe, Uganda as the core staff of Joint Task Force Support Hope. According to records available, a total of 2,100 U. S. military personnel, including SETAF’s 3rd Battalion (Airborne), 325th Infantry Regiment, deployed to the region in what  Pentagon records describe as “help(ing) prevent a humanitarian crisis resulting from large-scale refugee movements caused by the civil war in Rwanda.”

On July 25, 2003, it led the US military mission in Liberia to help prevent an impending humanitarian disaster.

A release from the Minnesota National Guard said Jensen will help advance U.S. strategic efforts and partnerships in Africa. He will split his time between his duties at the Minnesota National Guard and U.S. Army Africa headquarters in Italy. He holds a Bachelor of Science in finance/business economics from Northwest Missouri State University, a Master of Military Arts and Sciences from the Command and General Staff College and a Master of Strategic Studies from the United States Army War College. Jensen has previously deployed in support of Operation Desert Spring, Operation Joint Forge and Operation Iraqi Freedom. He earned his commission in 1989 from the U.S. Army Officer Candidate School at Fort Benning, Georgia. He served in a variety of positions in both the Minnesota and Iowa National Guard throughout his career, including as commander of the 1st Armored Brigade Combat Team.

In a statement, Jensen said “I am honored to be a part of this joint force and participate in the U.S. Army Africa and the Southern European Task Force tradition of partnering with other nations to achieve stability. About one in five immigrants in Minnesota is African, and I am especially looking forward to making meaningful local connections that will help U.S. Army Africa continue to assist our military and civilian partners throughout the continent.”

The National Guard was one of the main sponsors of the 5th African Awards Gala presented by Mshale held earlier this month.