Home Business Why do many highly educated immigrants face underemployment? 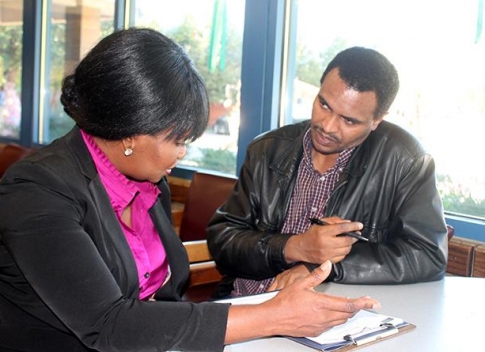 Earlier this month, Zewdu Negash sat in the lobby of a Minneapolis homeless shelter with a pile of credentials detailing a two-decade experience as a legal professional in Ethiopia.

The résumés showed that Negash has indeed been a well-established legal expert: a prosecutor for the Ethiopian government, an attorney with several private institutions, a judge in Addis Ababa and a 1994 graduate of the Kiev State University in Ukraine, where he earned an international public law degree.

When Negash moved to Minnesota in February, however, he could only secure a food-packing job at LSG Sky Chefs, earning $9 an hour to sustain his family, which has been living in the Sharing and Caring Hands homeless shelter in north Minneapolis.

“I have to work for my family,” he said softly, as his 6-month-old twin sons and 3-year-old daughter tightly clung to him. “I am supposed to leave this shelter in a few months and find my own place.”

For more than seven months now, Negash, 45, has been calling and sending emails to local governmental and nonprofit legal organizations seeking employment — to no avail.

Negash is hardly alone in his struggle to find employment in his chosen profession. More than 1.3 million U.S. immigrants who attained higher degrees from universities in their native countries are unemployed or underemployed, often working as cab drivers, cleaners or security guards, according to a report by the Migration Policy Institute, a think tank based in Washington D.C.

The report also found that the recovery of such immigrants’ occupational status depends on a host of factors, but that “overall, college-educated immigrants from Africa and Latin America have less success in finding skilled jobs in the United States than do immigrants from Asia and Europe,” the study noted. “Highly skilled immigrants with U.S. college degrees or U.S. work experience prior to permanent settlement fared far better than their peers with foreign-obtained degrees or no U.S. work experience.”

In Minnesota, according to census data, a higher percentage of foreign-born Minnesotans (15 percent) have attained a master’s or professional degree than non-immigrants (10 percent). Yet Bruce Corrie, an economics professor at Concordia University in St. Paul, said he knows many highly educated immigrants who are unable to make use of their credentials in the Twin Cities. Some of them eventually go back to school to relearn or polish their skills. But many others are forced to reinvent themselves, he said, and are now pursuing different professions.

In fact, Nasser Mussa, a program specialist at the Cedar Riverside Adult Education Collaborative, said his organization receives at least 50 college-educated immigrants and refugees each month. “We’re talking about people who managed giant corporations in their countries, engineers, math teachers,” Mussa said of the clients, many of them from Afghanistan, Somalia and Ethiopia.

For some, the biggest hurdle isn’t a mystery: the ability to speak English proficiently. Marisa Hernandez, a business training program coordinator at the Minneapolis-basedLatino Economic Development Center, often works with former teachers and nurses from Central America who are now stuck in low-paying jobs. “The issue for these immigrants is usually language,” Hernandez explained. “Many are highly skilled, but they don’t speak English.”

But other issues are less obvious, says Roseline Shelstad, a program coordinator at the Bloomington-based African Workforce & Entrepreneurial Development (AWED), which often works with immigrants whose degrees and credentials aren’t often recognized in the United States.

“We give them different career training,” said Liberian-born Shelstad, who has lived in Minnesota for more than 20 years. “But having soft skills is usually the biggest issue for the new immigrants.”

Negash is among those now enrolled in AWED’s 18-month training program, which partners with local companies to provide job seekers the tools they need to succeed in the work force, and he hopes to eventually continue in the legal profession.

“I’m hoping to find somebody who could help me navigate the educational system,” he said. “Information is very important. All I have been trying to do these months was to find people.”