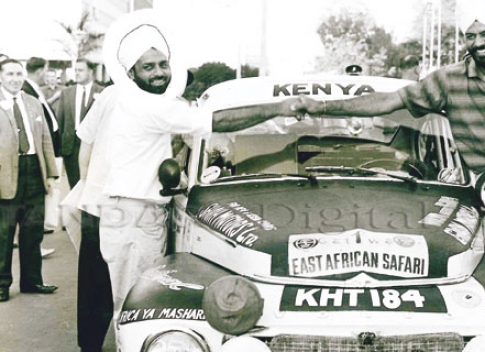 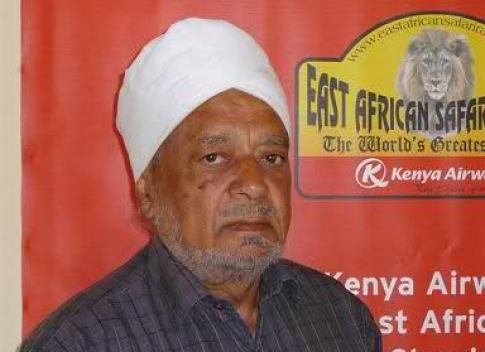 He is still a household name half a century after he carved himself a name by raising dust storms and churning mud on East Africa’s rugged highways and by-ways. To date, boys still mention ‘Jogida’ or ‘Jogida Sing’ whenever they see a car speeding away.

In Kenya, even for children who never witnessed his exploits on the road, Joginder Singh is synonymous with speed—breakneck speed.

The legendary Safari Rally champion Joginder Singh Bhachu passed away peacefully in London aged 81 last Sunday, Mashujaa (Heroes) Day. The undisputed king of the road succumbed to heart failure, leaving hundreds of thousands of his fans around the world in shock
and mourning.

Poignantly he died on Mashujaa Day, underscoring the fact that he was Kenyan hero.

Joginder Singh developed heart problems about ten-years-ago and underwent bypass surgery. He lived a quiet life in retirement with his family in Surrey, south-east England.

According to close family sources the octogenarian died in London at his son’s house.  He had complained to his son of severe discomfort and was put on a sofa to relax but passed on ten-minutes later.

Famously known as “Simba wa Kenya” and the “Flying Sikh”, Joginder Singh was the star of many generations of motor-rallying fans in Kenya and East Africans living around the world.

He entered the annals of history as the first Kenyan Sikh driver ever to win an international rally, and also the first man to win the gruelling Safari Rally three times.

Born in Kericho, Kenya on February 9, 1932, he was the eldest of ten children of Sardar Batan Singh and Sardarni Swaran Kaur.

Joginder was educated at a boarding school in Nairobi. His first work experience was as a spanner boy in his father’s garage. He gained further experience as a mechanic in other organisations before becoming the Royal East African Automobile Association’s first patrolman in 1958.

Joginder zoomed into the history books by winning the world’s toughest motor rally,  Safari Rally, in 1974 and 1976, competing against the cream of international rally drivers when the event was part of the World Rally Championship.

Joginder first entered the 13th edition of the then East African Safari Rally in 1965 with his brother, the late Jaswant Singh as the co-driver, in a second hand Volvo which was earlier driven by Tom Trana in 1963 and 1964 and had already clocked 42,000 km.

The two brothers drew the number one position for the start, considered to be unlucky, but they remained number one throughout the event that ran through Kenya, Uganda and Tanzania and made history after they finished at number one.

Joginder was outstanding as one of “the unsinkable seven” finishers of the 1968 event in which 74 crews started but only seven finished. The victors were also hailed as “The Magnificent Seven” after the Hollywood cowboy film released around this time.

From then onwards, they got plenty of sponsorships and Joginder went on to win the world rally event in 1974 and 1976.

Joginder’s record of 19 finishes in 22 attempts was an unprecedented feat for the Safari Rally in which finishing the event was once considered a greater achievement than winning other world rally events.

He was honoured as a special guest at the start of the 50th Safari Rally in 2002, and was appointed a patron of the Safari Classic in 2007.

Any visitor to his home in Surrey would marvel at the trophies, certificates, books, newspapers, magazines and documentaries chronicling his victories in motor rallies around the world.

Joginder Singh has left behind a legacy that has charmed across continents and his powerful persona and escapades as a daredevil rally driver will probably never find an equal in another century, for none came even remotely close for decades after he hung his driving gloves.

He always exhorted promising rally drivers to follow his example of being a teetotaller and urged them to break his own record.

Tributes have been flowing from the Kenyan diaspora across the world. Former Nairobi journalist Kul Bhushan, the doyen of motor rallying reporters, who covered the event for 26- years until 1990, for newspapers including The Standard said, “Joginder Singh achieved the legendary status of a national hero in Kenya and remains unmatched as a rally driver who outclassed the best of the world during the Seventies.”

Ken Kenny, of the London-based UKenTV said, “He will remain an icon in the world of Safari Rally. I salute you Joginder Singh.”

Bradley Downer of East Grinstead, said, “RIP. I have many fond memories of watching Joginder race as a kid.”

Jane Lesley Walshe of Bedfordshire, said, “RIP Joginder Singh, many childhood memories shouting for you at EA Safari Rallies, from a hill or roadside. Remember you well.”

Asin Lalji Noorani of Dubai, said, “RIP. A legend you were. I grew up in awe of your courage and skill.”

Retired Dar es Salaam newspaper photographer Narendra Gajjar, now living in Canada, said he remembers photographing Joginder on many occasions in his 25-year career and each time it was a photo session to remember.

“A much-loved hero of all Kenyans, he died poignantly on Sunday, when Kenya celebrated MashujaaDay. Fondly known as ‘The Flying Sikh’, Joginder Singh was also a consultant for the Himalayan Rally and took part in this event as well,” wrote the Hindustan Times of India.

There is no doubt that the world has lost a priceless hero, a true shujaa, who flew the Kenyan flag high in the world of motor rallying.