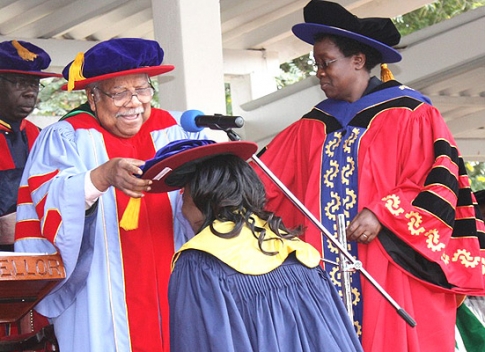 Renowned scholar, lecturer, school chancellor and “towering intellect” of the 21st century, Ali Al’Amin Mazrui, passed away peacefully at his home in the state of New York where he headed up the Institute for Global Cultural Studies at the State University of New York in Binghamton.

Prof. Mazrui had an illustrious scholarly life. He authored numerous books and hundreds of articles, carried many distinguished titles and sparked countless discussions and debates over African history. He was 81.

Born on Feb. 24, 1933 in Mombasa, Kenya, he studied in Great Britain, at Columbia University and Oxford College where he obtained a doctorate in 1966. He served at Makerere University, Uganda, until 1973 when he was forced into exile by Idi Amin.

In recent years, he spoke bluntly about his disillusion with political leaders, including Pres. Barack Obama, who began as democrats and wound up abusing power. He faulted the U.S. President for failing to release the Guantanamo prisoners but compared this to the actions of Kwame Nkrumah, a hero of anti-colonial liberation, who, later in his career, detained his adversaries without trial and invented Africa’s one party state.

“Idi Amin overthrew Milton Obote in 1971 in the name of human rights,” he noted, “and then launched a reign of terror in Uganda for almost a decade.”

A prominent critic of the current world order, he believed the current capitalist system was deeply exploitative of Africa, and that the West rarely if ever lived up to their liberal ideals. He opposed Western intervention in the Iraq War as well as many of the policies of Israel in its treatment of Palestinians.

In recent years, Mazrui became a well-known commentator on Islam and Islamism. While rejecting violence and terrorism, Mazrui praised some of the anti-imperialist sentiment within modern Islamic fundamentalism. He also argued, controversially, that sharia law is not incompatible with democracy.

In addition to his written work, Dr. Mazrui helped create the television series The Africans: A Triple Heritage.

He will be buried, in accordance with his wishes at the historical monument of Fort Jesus in Mombasa, a World Heritage site marked by Koran inscriptions carved into wooden door posts and ceiling beams.

He is survived by a wife and six children.