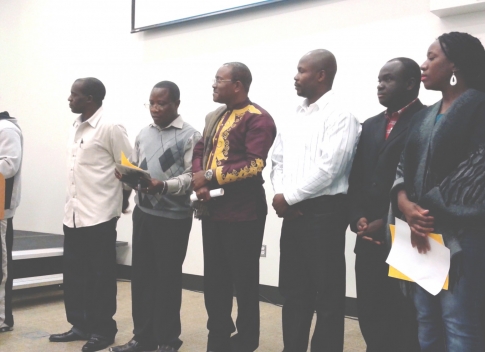 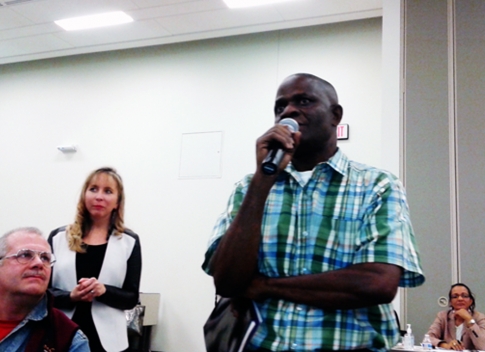 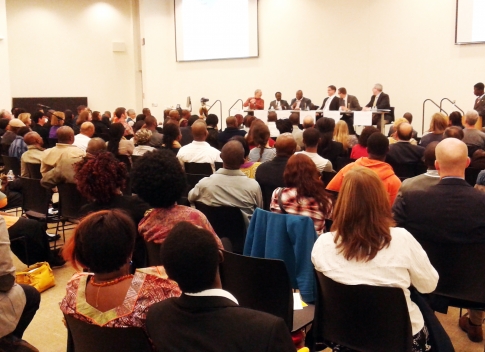 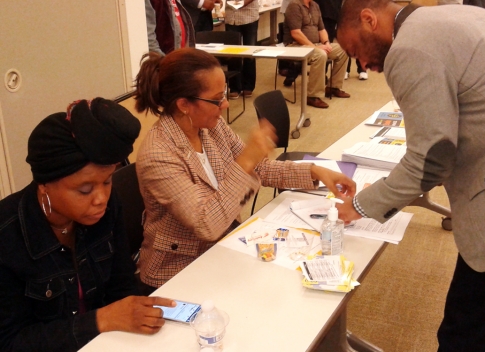 BROOKLYN PARK, Minn. – Hundreds of local residents gathered at the North Hennepin Community college Saturday evening for an Ebola information session organized by the Minnesota Africans Against Ebola Task Force and the Minnesota Department of Health.

Panelists included representatives from Allina Clinics and Hospitals and the Fairview Clinics. The two hospital systems are among the four selected by the state of Minnesota to be Ebola treatment centers should a case be diagnosed in the state. The other two are University of Minnesota Medical Center’s West Bank campus and the world-famous Mayo Clinic in Rochester. Abdullah Kiatamba, chair of the Task Force, said the choice of both private and public sector representatives was deliberate as “both perspectives are important,” he said. Rounding up the panelists was renowned mental health expert Dr. Richard Oni and Dr. Clarence Yaskey both members of the Task Force.

The US public has been in panic mode since the first case of Ebola was diagnosed on US soil, that of Thomas Eric Duncan, a Liberian who died October 8 after entering the country on September 20. Two nurses who treated him at a Texas hospital later contracted Ebola, Nurse Nina Pham being the first one to be diagnosed on October 12 with the second one, Nurse Amber Vinson on October 15. The two nurses have now recovered.
Avoid ‘Non-essential travel’

At Saturday’s session, Dr. Aaron Devries who is Director of Infectious Disease at the Minnesota Department of Health described Ebola as “one of the biggest health events in our community.” He said the numbers so far don’t capture the impact of the virus. Echoing recent statements from the Minnesota Africans Against Ebola Task Force urging African immigrants to avoid travel to the affected countries unless part of the medical teams that are volunteering to go and provide assistance, Devries said cooperation from members of the community is critical in dealing with any possible Ebola cases that might be diagnosed in the state. Dave Johnson, who oversees epidemiology at Hennepin County, the sates largest county and home to a larger percentage of the state’s African immigrants said the law gives the government the power to quarantine someone in the interest of public health. He stressed the preferred way is for those suspected to have been exposed to Ebola to cooperate with public health authorities.

“Please let us all encourage our people coming back (from West Africa) to adhere to the 21 day voluntary quarantine.” Stressing it will not be good for authorities to have to take extreme measures when it could be done voluntarily.

Dr. Alberto Ricart then explained the Ebola screening process when a suspected case shows up at the hospital. The Allina Hospital System is the largest in the state. Unity Hospital where Ricart is based is one of the twelve hospitals in the Allina system and is located in Fridley by the northwest suburbs home to many of the state’s large African population. It is one of the designated Ebola treatment c enters. Unity Hospital, Dr Ricart said, has a “negative pressure” room where someone suspected to have Ebola would be isolated to.

Through all these procedures, Dr. Steve Meizel of Fairview Hospitals said, his institution’s approach is to ensure the dignity of the patients is maintained.

The medical experts on the panel assured the community that the state is “well prepared” should any instance of Ebola be diagnosed.

They emphasized however that Ebola is not spread through the air and that one has to be exposed to the bodily fluids of an infected person.

“Mental health is not about craziness,” Dr. Richard Oni said in addressing the negative attitudes Africans have about the subject. He said Ebola is “stressing out people” and it is time for the community to embrace mental health. He said the virus is wreaking havoc with the African immigrants’ mental health as many are still dealing with the scars of civil war. Liberia, one of the three countries worst affected (the other two are Guinea and Sierra Leone), is the largest in Minnesota among the West African communities.

He lamented Africans’ response to stress or mental challenges by “overworking until they crash.” From a mental health perspective, he said such a response is not sustainable.

As is to be expected at a gathering that has Africans amongst it, things did get interesting during the Q & A, even with the seriousness of the subject. “Was this virus released into the world by the Americans as part of research?” one Liberian-American asked.

Dr. Aaron Devries of the Minnesota Department of Health calmly debunked the conspiracy and said Ebola “has been around for years.” The only difference he said the latest outbreak has been more widespread causing fear and panic. As of Saturday, the World health Organization (WHO) said the death toll from Ebola had risen to 4,922 out of 10,141 recorded infections. Guinea, Sierra Leone and Liberia account for 4,912 of the 4,922 deaths.

However “If one has no symptoms, you are not infectious,” he said.

Responding to another question, Devries said the state does not need that many ‘Ebola beds’ as they are not needed. The likelihood that the state will need to respond to a massive outbreak is very remote.

Attendees at the session also shared instances of being stigmatized. A teacher from the Osseo school district said children of African immigrants do not want to be identified as African as other children have been accusing them of “bringing Ebola to America.”

A Liberian-American pastor, Alexander Collins, said even in his multicultural church, non-Africans have stopped coming to church for fear of catching Ebola.

Ramona Gaye, a Liberian-American Registered Nurse (RN), spoke briefly about the recruiting effort of the Diaspora’s medical talent that is being spearheaded by Medical Boots on the Ground round among others. We cannot just wait for others to do things for us,” she said.
Insurance, evacuation and salaries of the volunteers will be covered. “And your job is guaranteed, upon returning,” she assured those contemplating volunteering.

Those interested in the Medical Boots on the Ground initiative can send an email to dmbog2014@gmail.com for more information.