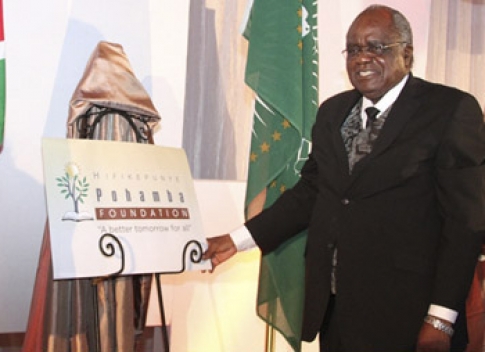 A five million dollar prize for exemplary leadership, good governance and defending human rights has been awarded to the president of Namibia, it was announced this week.

President Hifikepunye Pohamba is the first leader to capture the prize since it was awarded to Cape Verde’s former president in 2011. The Mo Ibrahim Foundation, named for Mohamed “Mo” Ibrahim, a Sudanese-British former mobile communications entrepreneur and billionaire, said it failed to find a qualified leader in the interim years.

Pohamba, 79, was announced as the winner of the award at a ceremony in Nairobi on Monday.

According to the Foundation’s website: “The Ibrahim Prize recognizes and celebrates African leaders who have developed their countries, lifted people out of poverty and paved the way for sustainable and equitable prosperity.”

The award – worth $5m over 10 years and then $200,000 per year thereafter – is only open to former African executive heads of state or government who have left office voluntarily in the last three years after being democratically elected.

At 25, Pohamba was a founding member of the South West Africa People’s Organization (Swapo) which pursued independence from apartheid South Africa. He was held as a political prisoner during South Africa’s colonial rule over the country and was whipped in public for advocating an independent Namibia.

Until the achievement of independence, Pohamba represented SWAPO across Africa, although he studied politics in the Soviet Union for a time in the early 1980s. As Minister of Lands, Resettlement and Rehabilitation, among his many posts, Pohamba initiated a policy of partial land expropriation from landed white farmers to landless black ones. The move was intended to speed up the “willing buyer-willing seller” policy which was deemed insufficient.

Pohamba was elected twice – in 2004 and in 2009. He has pledged to hand over power to prime minister Hage Geingob later this month.

Under Pohamba’s leadership, Swapo made major strides in gender equality, with 25 of 72 parliamentary seats filled by women. The party was also been commended for improving national health services and increasing Namibia’s life expectancy from 55 in 2004 to 64 in 2012.

He is also credited with overseeing strong economic growth with gross domestic product per capita rising from $3,297 in 2004 to $5,693 in 2013, according to the World Bank.

In a press interview, Mo Ibrahim said: “I think [Pohamba] gave us a wonderful example of a leader who came in democratically and moved his country forward, improved education … and paid attention to social cohesion.”