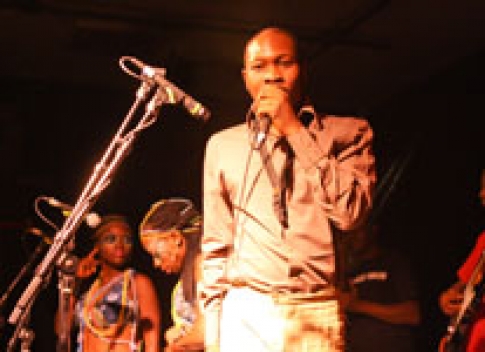 Seun Kuti & Egypt 80 understand how to play to huge crowds. They know how to handle hot sunshine or soaking rain. They’ve played in many festivals, but the weekend of music at Rock the Garden coming up in less than two weeks at the Walker Art Center might present a new element of challenge.

The Afrobeat band from Nigeria will be sandwiched between JD McPherson, an all-male old-time rock-n-roll band and Babes in Toyland, an all-female raw punk band, neither of which segue neatly from one to the other. What’s more, many of the members of the audience will be keen to hear the headline act, Modest Mouse.

Seun Kuti & Egypt 80 carry the legacy and the mien of Seun’s father, Fela Kuti. Hearing their horn-driven funk will very likely be a first for many concert-goers. Although Seun Kuti played here in Minneapolis as recently as 2014, he played at the Cedar Cultural Center where attendees either know their musician or expect something innovative. Plus, even with a sold-out house, there were only 625 people gathered.

Sunday, June 21st, easily 10,000 people could fill up the lawn at the Walker. People ready for punk and garage-band sound. When Kuti and his band take the stage at 5:45 pm, the audience might pull out their earplugs in amazed pleasure.