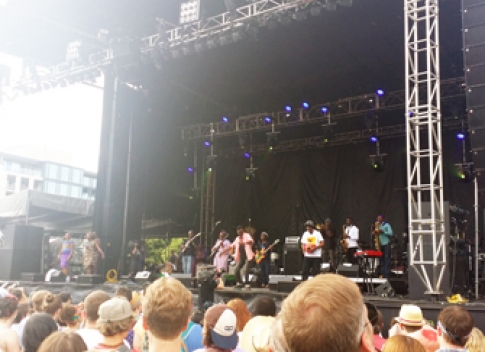 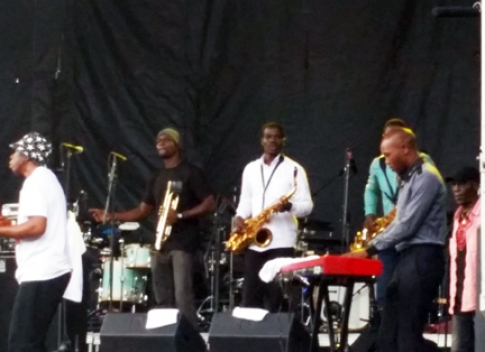 There was only one general consensus among the crowd that filled the Walker Museum’s lawn for Rock The Garden’s Sunday line up, as Nigerian musician Seun Kuti and his band performed their hour long set; they sure could move! Between Kuti’s rhythmic near-spiritual jerking, and his two female dancers’ African hip shaking (that some in the audience wrongly labeled “twerking”), they thrilled the crowd with a show that stood out from the rest of Sunday’s line up. That for many, this was the first time they had seen Kuti & Egypt 80 perform, only added to the wonder. And while it was clear that the crowd was eagerly awaiting Babes in Toyland, an all female punk rock band, and even more voraciously indie-rock darlings, Modest Mouse, who were the weekend’s closing act, they ate up the sounds of Afrobeat that poured off the Walker stage, keeping those at the front on their feet for the entire performance. The gorgeous backdrop of the Minneapolis skyline framing the stage, didn’t hurt either.

Previously performing at the Cedar Cultural Center in 2014, Sean Kuti & Egypt 80 broke ground with their Sunday appearance; as the first ever artists from the African continent to perform at the annual Rock the Garden music festival. The long running event launched in 1998 by the Walker, and subsequently co-sponsored by 89.3 The Current since 2008 has over the years morphed into an indie-rock music festival, so Kuti and Egypt 80’s inclusion this year seemed surprising. But the Current is also known for pushing eclectic and independent music to its fans; and afrobeat is no exception.

Opening the show with “Are you ready to dance?” Current host Mark Wheat provided a back story for the audience that highlighted Seun’s influential father, Fela Kuti who pioneered the style of Afrobeat that his son now tours the world performing. Wheat emphasized the importance of their inclusion in this year’s lineup, while also touching on the political messages infused into afrobeat, before Egypt 80 appeared on stage first. The band performed a warm up set before Seun Kuti himself appeared – dressed in fitted long sleeved black shirt and slacks in complete defiance of the hot and humid nearly 90F weather. Kuti opened his set with an homage to his father, that was doubly fitting as it was also Father’s Day. He performed Fela’s ‘Opposite People’; a song that is nearly impossible to sit still through and that set the tone for the rest of the show.

Jazz, funk, percussion, keyboards, and impassioned vocals poured out for the next 60 minutes straight, accompanied by dancers whose face paintings matched their traditional clothing and provided a visual focal point of entertainment as they were splashed onto projector screens. Kuti’s signature dance moves; arms flailing, hips jerking, back twisting, as he wound his body up and down the stage was as equally entertaining and fitting. By the end of the show, his sweat soaked shirt had been replaced by an even sweatier bare chest as he moved from saxophone to keyboard to mic, while giving each member of the band a solo piece set to showcase their talents.

Kuti & Egypt 80 lived to up the political message embedded in afrobeat, performing songs that highlighted the hypocrisy of the IMF’s message of bringing help to African countries as they chanted, “We never see no help, we never see no dollar,” and another dedicated to “ inspire women the world over”; although it quickly became apparent that it was dedicated to “black women” which seemed ill placed in the predominantly white crowd. Other hits also addressing Africa and African issues felt flat in the crowd, though poignant and relevant. No doubt however that Seun Kuti regained any fans he may have lost along the way by making a splashy announcement of his support for Minnesota’s legalization of medical marijuana, set to begin July 1st. His announcement, met by a big cheer from the crowd, set lighters flaming and the scent of marijuana floating through the crowd. Playing on the name of the drug’s chemical component, THC, he referred to it as “The Higher Consciousness”, and joked with the crowd to keep this part a “a top secret” as he crouched at the front of the stage, putting his lips to his fingers.

As the band came to the end of the show, the shorter time set became apparent for a band whose songs typically run upwards of 6 minutes. But given the hot weather and outdoor stage the limited set, was a welcome break to get away from the glaring sun, and replenish all the fluids lost in an hour of non-stop moving and shaking. And for many others, a chance to get more acquainted with the band and Afrobeat on their phones and social media. Without a doubt, Kuti and his band walked away with at least one more hardened fan; me.