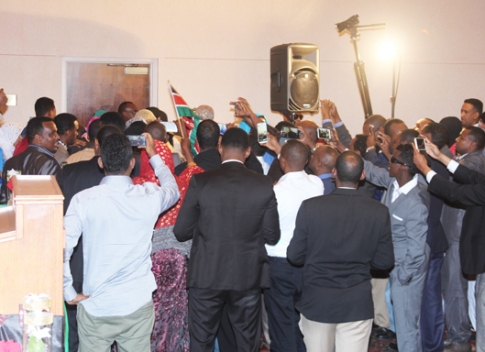 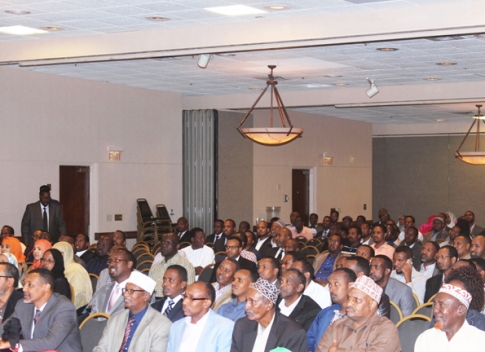 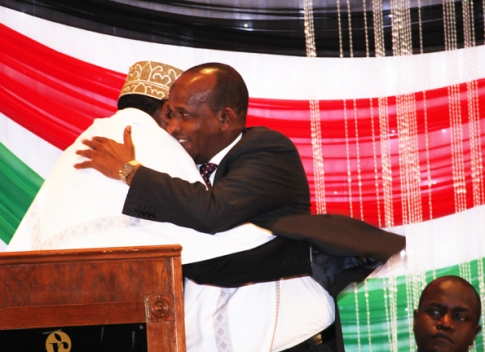 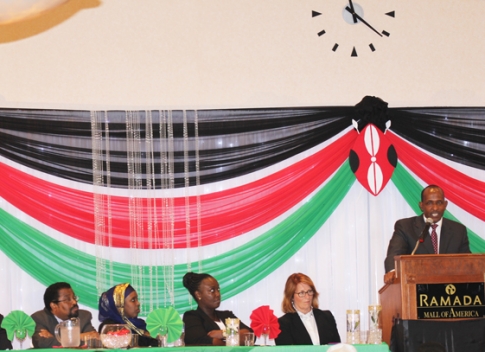 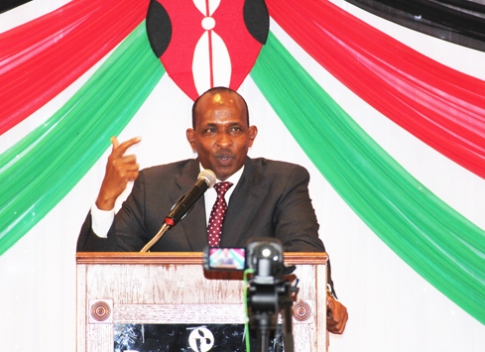 BLOOMINGTON, Minn. (Mshale) – Kenya’s Majority leader in parliament, Aden Duale, gave  a strong defense of Islam, describing it as a “religion of peace,” saying  Muslims should stand firm and articulate the true teachings of the religion in the face of efforts to associate it with terrorism.

Duale said most of the victims of terrorism are “our own people” adding that the Muslim community must however deal with the issue of extremism.

Mr. Duale was speaking in Minneapolis during a meeting with the large Kenyan population here at a hotel by the Mall of America.

The Majority leader said the issue of extra-judicial killings in his country is a “serious one” and that the government is looking into it and expressed his desire for a resolution on the matter.

The meeting which started shortly after 9pm, instead of the advertised 7pm, had a broad representation of the Kenyan community in the state but by the time Duale took to the podium close to 11pm, most of the non-Somali speaking Kenyans had already left in disgust unable to follow the proceedings which were being conducted in Somali.

The tone for what was to take place for the rest of the evening was set by the choice of master of ceremonies, Mahamud Masadde. He is the Voice of America local correspondent, who does not speak Swahili. An unwritten rule the Minnesota Kenyan community has adhered to over the years is the requirement that an emcee should have a working knowledge of both Swahili and English, Kenya’s two official languages. Masadde made light of the fact that he could not speak Kiswahili to the chagrin of the non-Somali Kenyans in the audience. In Minnesota and other states around the US, events advertised as national meetings as this one was, are expected to be conducted either in Kiswahili or English.

Hercules Otieno, a Twin Cities realtor, is one of those who left the meeting before Duale spoke.

“I felt it was an insult to the wider Kenyan community for a meeting featuring the Majority leader of our country to be conducted in Somali and not Swahili or English,” Otieno said. “They should have advertised this as a Somali meeting.”

When he took the stage, Duale, preceded by about 14 local speakers drawn from a cross-section of the Kenyan community and Somalia, said “I will stick to English because the Kenyan media gave me grief in Eastleigh.” Recalling a time when he spoke at a public meeting in Somali. He however could not resist the opportunity to speak in Somali and translated his English remarks at the end in his first language.

The meeting, advertised in flyers as a Town hall, was anything but. The Majority leader did not take questions from the audience, characteristic of what Kenyans here have come to associate with town hall meetings.

Duale was however effusive in his defense of the Uhuru government. Most Kenyans in Minnesota were Raila Odinga supporters in the last election, a fact Duale conceded at the meeting. Duale is on record as saying he will take a bullet happily for Uhuru or his deputy Ruto during an interview last year. Additionally, he said if Ruto told him to jump from one of Kenya’s tallest buildings, he would do so.

“We are required to use 20 minutes of microphone time to say the good things jubilee is doing,” he said. He dutifully listed the achievements of the Jubilee coalition, including the fact that some of the powerful ministries in government such as Defense and Foreign Affairs are headed by women.

“Parliament has 28% women but the constitution calls for 33% and we are working hard to get to that number,” said Duale.

He boasted that the Uhuru government has taken development of infrastructure to a whole new level. “Garissa (his hometown) is now connected to the national (electricity) grid,” he said to loud applause. Many of the major roads connecting the marginalized regions of North-Eastern, where the majority of Kenyan Somali community hails from, have been tarmacked, the Majority leader said.

Duale also took some time to hit at his critics including Professor Makau Mutua. Mutua, a former Dean of the State University of New York at Buffalo Law School and a member of the Council on Foreign Relations, pens a popular column in the East African Standard, a leading Kenyan daily. In a September 13 column, he rubbished Duale as a spokesperson for the Somali community telling him to “stop acting like an unwanted concubine in Jubilee.”

At the Minnesota meeting, Duale told the audience as he was leaving Kenya for the US, “I begged the editors to publish my rebuttal, I almost went down on my knees,” Duale said with his trademark smile. In his published rebuttal in the same paper, Duale opined that there is no such thing as a spokesperson for the Somali people “the Somali are egalitarian and free. Being, as they are, a versatile and itinerant people with a strong entrepreneurial sense, the idea of imposed representation as community is out question. That though does not mean the Somali don’t recognize those among them who are well-placed and equipped to articulate their fears, aspirations and dreams.”

There was a light moment where he said he wished someone could take a photo of the Minnesota meeting  “to send to Makau Mutua so he can see I have supporters.”

Duale also spoke on the success Kenyan Somalis have enjoyed in Kenya because of the “peace and enabling environment” in the country and because they chose to do “serious integration” with the people of Kenya. He reminded people that the current Foreign Minister for Kenya is a Kenyan Somali and is the first woman in Kenya to be in charge of the Foreign Ministry. “Energy ministry is also in our hands,” he said.

Duale said Somalis in Kenya should not lose sight of the achievements the community has attained even as it pushes for more,  “Alhamdulillah” he said to cheers. Saying the community must be thankful.

The fourteen or so speakers who preceded Duale included local Minnesota leaders from Somalia that thanked the Kenyan people for accommodating them as refugees for the last two decades.  Duale responded by articulating the efforts Kenya has made to make Somalia peaceful. He said he had the pleasure of making his first visit to Somalia recently. “The best fish is in Kismayu,” he said, to prolonged cheers a sign of the strong numbers of people from Jubaland that were present. Kenya has been accused of supporting Ahmed Mohamed Islam (Madobe) who declared himself president of Jubaland.

Somali blogs have been rife with accusations directed at Kenya’s handling of that region of Somalia that wants to be autonomous along the lines of Somaliland and Puntland, which are not recognized internationally.

The Majority leader is the United States for the United Nations General Assembly where President Uhuru Kenyatta is expected to lead the Kenyan delegation. Kenyans in the United States on Saturday called on President Kenyatta to cancel his visit to new York and instead send a representative, so that the president can deal with the more pressing matter of the teachers’ strike that has seen schools nationwide closed. In a story appearing in the Nation by its US reporter, BMJ Muriithi, the chairman of Kenyans For Kenya (KFK) US Chapter Mr Peter Makanga said the President should instead “deal with the crisis facing the nation”.

Kenyatta is expected in New York on Wednesday.