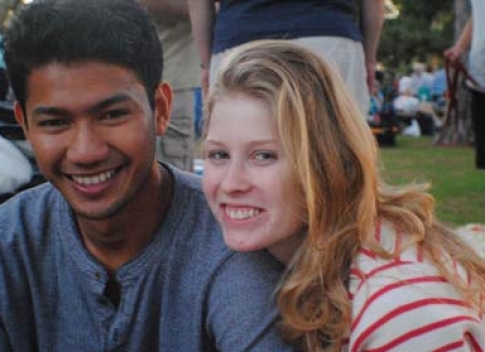 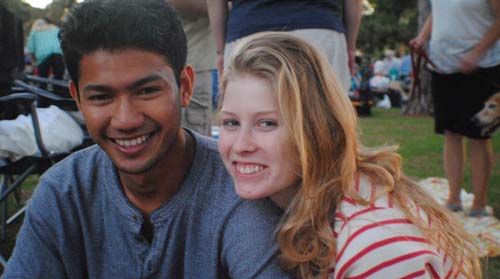 LONG BEACH, Calif.- Two years ago, everything seemed to fall into place for Chando Kem, from his mental state to his work and love life.

That was when the Long Beach resident applied for and received Deferred Action for Childhood Arrivals (DACA), a program that grants certain undocumented youth temporary relief from deportation, a social security number, and a permit to work.

“Now I’m not afraid to walk anywhere,” said the native of Cambodia who has lived most of his life undocumented.

Kem may only be 21, but he has been through a lot.

He’s worked under the table and been robbed of overtime pay due to him. Without an I.D., he’s missed out on memories with friends at clubs. Without a license, he has had to pick up his dates on the bus, sometimes being late. Deportation was always at the back of his mind.

“My whole life got better,” said Kem, laughing, after he qualified for the program in February 2013. “Mentally, I feel more relief and more legitimate. I’m not going to be deported.”

Since it was launched by President Obama in 2012, DACA has benefitted the lives of over 680,000 people like Kem so far, according to U.S. Citizenship and Immigration Services data.

Besides a healthier state of mind, Kem now has a better-paying job as an outreach ambassador for Long Beach City College.

“Prior to that, I felt like I was stuck in limbo, not being able to grow,” said Kem, who worked only under the table jobs before.

Kem used to work as a wedding server at a Long Beach restaurant, juggling school part-time. He often served during breaks and was not paid the overtime hours he performed. “It was rough because I worked from 6 PM to 3 AM. We were always understaffed. Yeah, it was tiring,” Kem recalled.

He estimates the employer robbed him of “a few thousand” dollars in overtime.

Now that he has a work permit through DACA, Kem was able to find a job that he loves. “This job is awesome. They work with my schedule. They respect my time,” said Kem, who provides college resources to high school students. “I want to reach the undocumented kids that feel shy,” he said.

Free from deportation, and with a better job, dates on the bus are also no more: Kem has a driver’s license, and it does not have the distinguishing mark that AB 60 licenses have. Some immigrants feared that the mark, which states “Federal Limits Apply,” may lead to profiling.

“I can commute wherever I want, whenever I want,” said Kem, who doesn’t bug his friends for rides anymore.

He was often late to dates, especially when he missed the bus. His dates would ask him why he couldn’t drive. “Prior to DACA, I felt a stigma,” said Kem. “Especially when you’re in the dating stage, I don’t really tell people, ‘Hey, I’m undocumented.’”

Only 21 percent of eligible Asians have applied for DACA, compared to 77 percent of Latinos, according to a report by the Migration Policy Institute that looks at immigrants from the top four counties in Asia and the top 12 countries in Latin America.

The Migration Policy Institute estimates there are 152,000 Asian immigrants who are eligible for DACA, the largest concentration of them in California.

Kem was a Dream Summer intern this past season, where he worked to educate people in API communities about DACA. He discovered that many did not know what DACA was.

Asian Americans need to join the immigration movement to diversify it, Kem said, perform more outreach, and gain as strong a media presence on the issue of immigration as Latinos have. “That really brings power to the Latino voice,” Kem said.

“Stigma is silencing,” Kem said. “The more you talk about it, the more you kill stigma.”

For all its privileges, DACA does have its limits. It costs $465 to apply and also to renew, and beneficiaries can apply to travel outside the country only for humanitarian, educational, or job-related reasons. The last time Kem was in his Cambodian hometown of Phnom Penh was when he was seven.

Since then, his mother, a business owner in Phnom Penh, has visited him in Long Beach sporadically throughout the years.

Yet many areas of Kem’s life have improved thanks to DACA. In particular, Kem’s dating life has gotten better. He recently picked up his girlfriend in his 2002 Toyota Solara for a date to Disneyland. He was on time.

“What are you waiting for?” Kem asks those who haven’t applied yet. “Opportunity [comes] to you,” he says, when you are able to get a social security number, a work permit, or an unmarked driver’s license. “It’s a tremendous change to your life.”

This profile was produced for New America Media in collaboration with Ready California (Ready-California.org), a statewide coalition working to ensure that the maximum number of eligible Californians benefit from DACA and DAPA. For more information about how to apply for DACA, go to: www.ilrc.org/daca.