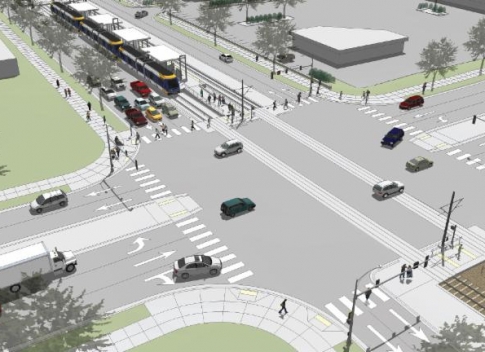 The City of Brooklyn Park held its first of two public hearings on the proposed Blue Line Extension on Monday, January 25th at the Brooklyn Park City Hall. The proposed 13 mile extension of the existing METRO Blue Line would extend from downtown Minneapolis through north Minneapolis, Golden Valley, Robbinsdale, Crystal and Brooklyn Park, serving the northwest Twin Cities.” If approved, the extension would provide easier access to the Northwest suburbs and faster public transit connections to popular destinations such as downtown Minneapolis, Mall of America and the Minneapolis-St. Paul International Airport.

Dubbed the ‘Bottineau LRT’, the joint project is led by the Metropolitan Council with the cost  currently pegged at $1.48 billion, most of it coming from the federal government with funding participation from the State of Minnesota and Hennepin County. The public hearing in Brooklyn Park which invited citizens to share their comments or concerns on the proposed project is one in a series of such hearings being conducted in the cities that sit along the proposed line as part of Minnesota’s Municipal Consent process that is required by state law for communities affected by a transit project.

Minnesota law calls for the Municipal Consent process which tasks the Metropolitan Council with seeking “local review and approval” for such projects. This means public hearings as well as consent from each city government before the project can be green lighted. In the case of the Bottineau line, those cities include Brooklyn Park, Crystal, Golden Valley, Brooklyn Center, Robbinsdale and Minneapolis. The Municipal Consent requirement has proved particularly challenging for another light rail project also in the works, the Southwest LRT project which will go from downtown Minneapolis to Eden Prairie. That project has been met with fierce public opposition and cost overruns. Its battle in the Northwest suburbs, home to many African immigrants and property owners, may prove easier as evidenced by the steady progress of the project, and public comments at the January 25th public hearing.

Speaking with Laura Baenen, communications manager for both the Southwest LRT and the Bottineau LRT, she noted the hearing was about giving “the public a chance to comment on preliminary designs plans- stations, tracks, bridges, roadways, sidewalks,” and “to help people understand the plan,” which is “currently 15 to 30% complete.”

Members of the public had the opportunity to engage project staff who were on hand to answer questions during the open house. A scaled model of the planned line that the public could interact with was also available in an adjacent room. Council chambers quickly filled up before the 7pm hearing with approximately 80 people in attendance, a fraction of whom would take to the floor over the course of an hour, sharing both concerns and hopes for the impact of the Bottineau LRT on the City of Brooklyn Park.

Project Director, Dan Soler, opened the public hearing with an outline of existing physical design components for the LRT. He walked attendees through the proposed tracks and stations, detailing the path the Bottineau LRT would take through Brooklyn Park- entering the city limits under Highway 694, with its main route and stops along West Broadway, before ending its tracks at a proposed maintenance station at 101st Ave and Oak Grove Parkway.

Soler also provided progress on the project stating, “We’re in the middle of the Municipal Consent process. The idea is to have it completed by March 4th.” What happens after Municipal Consent is given? “Then we’ve got 6 years of work to opening day (in 2021). We’ll be engaging the city at 30%, 60%, 90% and eventually completion of the project.”

Brooklyn Park Mayor, Jeffrey Lunde, spoke after Soler stressing the importance of allowing the public a chance to offer their comments for review prior to a city council vote on the project. Chris Berne of North Maplebrook Circle was the first to offer his comments, and one of only two residents speaking who out rightly opposed the project. Berne cited concerns around the lack of a formal plan to address compensation for homeowners whose properties would be affected by the expansion. An issue initially brought up in 2014 when detailed maps of the project were first presented to the public. Berne applauded the council on the improved plan since it was first presented, but urged the council to work on remaining issues before voting for its approval.

The majority of commenters however spoke in favor of the project. They ranged from construction to electrical workers, long time and newer Brooklyn Park residents, representatives from North Hennepin Community College, the African Career, Education & Resource Inc. (ACER), the healthcare industry, and other community organizations. Among the major benefits those in favor touted were the jobs the project would create, both during construction and after, economic development of areas along the transit corridor, and access to a fast and easy public transit option that would greatly improve livelihoods and create health benefits for those using it.

However, many cited safety as a concern with many asking for improved safety and accessibility at planned crossings, particularly along the busy West Broadway Ave in Brooklyn Park. For others there were concerns around ensuring affordable housing along the line, particularly given the number of low income, and residents of color living in the community.

Fearing a rise in rents or the proliferation of expensive condos and apartments that has occurred along other LRT transit corridors such as the Green Line and the existing Blue Line, residents sought reassurances that both the city and the Metropolitan Council would make affordable housing a priority. But for Denise Butler, an ACER member, affordability extended beyond housing. She called on the Metropolitan Council to ensure that there would be no increase in transit fares, “people are already struggling with existing fares,” she stated. Other commentators of color stressed the need to ensure that the project had racially equitable outcomes given the startling data showing wide racial disparities in Minnesota.

Overall, despite opposition over certain aspects of the project, those who provided comments applauded the city council and the Metropolitan Council on its efforts thus far and appeared enthused over the increased opportunities the LRT extension would provide. As Gordon Carter, Brooklyn Park resident noted in one of the lighter moments of the evening, “We might even get a decent restaurant in Brooklyn Park.”

The next and final stage in the Municipal Consent process will be action by the Brooklyn Park City Council where the Council is set to vote on whether to give consent to the project. That vote is scheduled for February 22nd at 7pm.

According to Baenen, Communications Manager for the project, citizens can also attend public hearings in other cities along the project line to have their comments heard. In addition, the Metropolitan Council will be taking online comments until January 29 and Brooklyn Park will be taking written comments until February 15th. Written comments can be submitted by mail or email to Emily Carr, development project coordinator for the city of Brooklyn Park, at 5200 85th Ave. N., Brooklyn Park, MN 55443 or to lrt@brooklynpark.org.