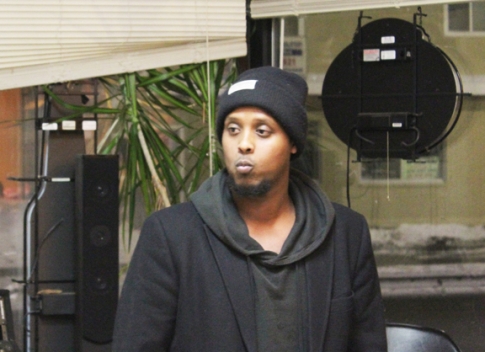 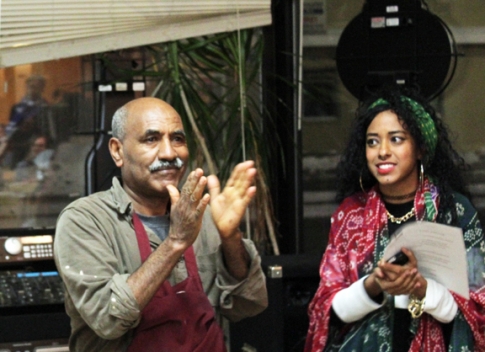 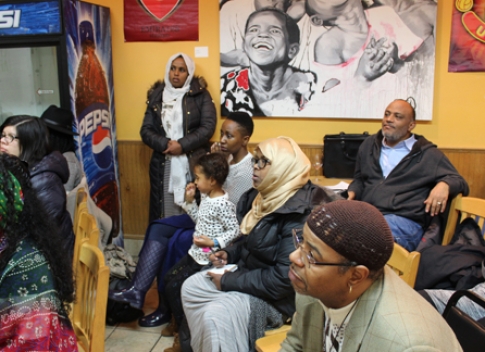 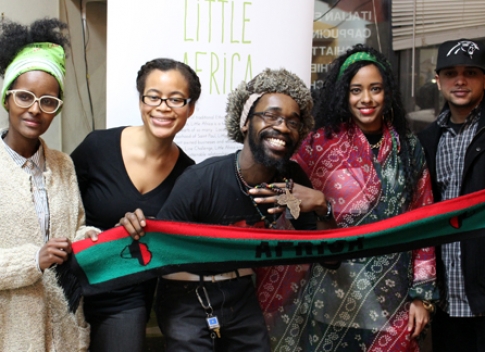 The Little Africa initiative, spearheaded by project leader Gene Gelgelu, held its first arts, open mic and dialogue series this past Wednesday, January 20th. The free event, held at the Snelling Cafe in St. Paul’s Hamline-Midway neighborhood drew a varying crowd of 50-60 people, the majority of whom were of African descent.

Little Africa  is “a branding and marketing campaign focusing on African immigrant economic assets” along transit corridors such as the Blue Line and the Green Line and organized by African Economic Development Solutions (AEDS), which supports economic development opportunities within Minnesota’s African immigrant community. It was last year’s recipient of the Non-Profit of the Year category award at the African Awards.

The St. Paul Hamline-Midway neighborhood, where Snelling Cafe is located, has been a hubbub of activity for the initiative. The cafe is owned by Eritrean-born Afeworki Bein. Last summer, the area saw a series of colorful murals go up on the walls of African owned businesses in proximity to the Snelling Avenue Green Line stop. African owned businesses in the neighborhood have also served as the location for a series of community meetings focused on engaging the African community in the development of Little Africa.

With an estimated 50-60 African owned businesses in the area, the minds behind the initiative hope to “root the heart of Little Africa within St. Paul’s Hamline Midway area,” according to Sagirah Shahid, Office Manager and Public Relations Specialist for AEDS.

The Snelling Cafe event is the first in a series that curator and organizer Lula Saleh hopes will “bring more attention to this community of African immigrant businesses and entrepreneurs,” in order “to support and celebrate them, while having much-needed conversations through the arts about culture, identity and race.”

Saleh, a singer, songwriter and performer of Eritrean descent hosted the open mic whose theme was ‘Home, Identity, and Displacement’, a heavy topic that both the performers and audience members were eager to unpack in discussions following each performer. Saleh opened the event by performing an essay she had written surrounding the question that many new immigrants are often asked, “Where are you from?” For Saleh, as for many other immigrants, the simplicity of the question belies its complicated nature. Does the person asking the question mean where do you currently live? Where you were raised? Where you were born?

Saleh says, “In truth, I answer differently, each time.”

A succession of performers ranging in age and nationalities took the stage over the next two and a half hours exploring the question of identity and belonging as African immigrants, while also highlighting the diversity of immigrant experiences in the Twin Cities and Minnesota. Popular performance artists Abdi Phenomenal (who runs the Somali American youth group Ka Joog) and Ifrah Mansour (whose 2015 solo piece, How to Have fun in A Civil War explored civil war through the eyes of a child) both performed at the event along with lesser known local artists. Audience participation in the discussions following each performer allowed for engaging conversations about the issues presented that shed a light on both perceptions and misperceptions of new African immigrants.

Abdi, whose two spoken word pieces were enthusiastically received by the crowd, took to the event’s Facebook page later that evening noting, “For me, tonight was a testimony of how our communities have relevant voices and powerful roots. I was thankful to hear all of your poems and stories!” This increased visibility of the wealth and breadth of cultural assets in Minnesota is what AEDS hopes to showcase through the series.

State Representative Rena Moran, whose district “the heart” of Little Africa sits in was in attendance as well, giving a reading of a poem titled ‘Heroes’ and an impassioned speech for the need for increased participation of people of color at the Capitol. Rep. Moran who serves as the only black woman in the legislature talked about the importance of “telling our stories,” and her desire to connect more to the African community both in her district and beyond. She encouraged those in the room to get involved with political processes outside of voting day, whether through caucuses, joining political campaigns, interning, or just visiting the Capitol building.

“I want us to get comfortable believing that we belong in this building,” she said.

For Snelling Cafe owner, Afeworki Bein who kept the growing number of attendees well fed serving up delicious, mouth watering platters the event was an opportunity to introduce people to what has been “the hang out for East, West, and South Africans,” for the 11 years he has been in Minnesota. As performer Mansour noted, “Art is a catalyst for opening doors, I came here for the art, but I’ll be leaving with so much more.”

The next Little Africa open mic will be hosted on Tuesday March 8th at a location yet to be determined. To stay up to date on the Little Africa initiative and see highlights from past events you can find them on: