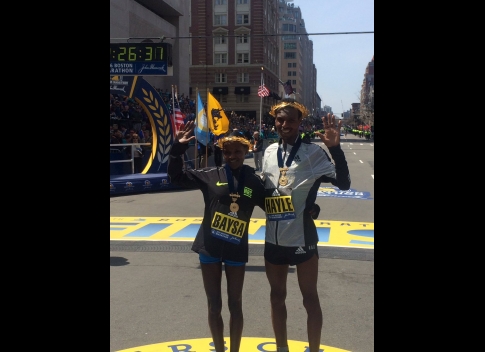 Ethiopians swept the Boston Marathon today for the first time in the race’s history, toppling the Kenyans who have dominated the race for decades.

It was a 1-2-3 sweep in the men’s race with Lemi Berhanu Hayle leading fellow countrymen Lelisa Desisa and Yemane Adhane Tsegay to the finish line. Hayle crossed the finish line with a time of 2:12:45.

In the women’s race, the Ethiopians almost shut out the Kenyans as well, as they won in that race as well and also clinched the second position.

Atsede Baysa won the women’s race with a time of 2:29:19 hours, 44 seconds ahead of Tirfi Tsegaye, also of Ethiopia. Baysa is also a two-time Chicago Marathon winner.

Joyce Chepkirui came in third to avoid a shut out of the Kenyans. The Kenyan athletes are under intense scrutiny following action by the World Anti-Doping Agency to put Kenya under probation after 40 athletes tested positive for performance enhancing drugs.

During a visit to Minneapolis last November to host running clinics for Minnesotans, the 2014 New York Marathon winner Wilson Kipsang, in informal conversations with this reporter who was a participant in the running clinic, said the performance enhancing scandal in his country is partly due to foreign managers misleading young athletes.