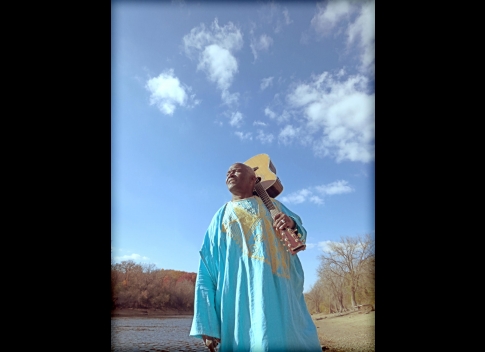 Siama Matuzungidi traveled across Africa performing his beloved soukous music of Zaire, now Democratic Republic of the Congo. Along the journey, he felt influences from Uganda, Kenya, and even Japan and Dubai.

Fate, both his and ours, landed him in Minnesota where he’s continued to experiment musically and expand his repertoire. The word, “soukous” originates from the French word, “secouer,” which is “to shake.” Matuzungidi’s music, like all excellent soukous music, compels its listener to stand up and dance. The audience will not be disappointed with the sounds that emanate from the stage.

This renowned soukous player will collaborate with familiar Minnesotans such as gospel singer JD Steele, fellow McKnight Performing Artist Fellowships recipient, Jacqueline Ultan on cello, as well as others including Carnatic Indian singer and veena virtuoso Nirmala Rajasekar, master Tibetan multi-instrumentalist Tenzen Ngawang, and Joe Savage on a mean pedal steel, in total, well over a dozen musicians. With Matuzungidi at the helm, their polyphonic and layered show promises a transformative experience.

Ultan said, upon first hearing Matuzungidi’s music, “I was immediately swept into a place of joy and beauty by his sound.” As they contemplated joining forces, the cellist continued, “I had never played African music before and Siama had never worked with a cellist, so this was a new experience for both of us. We are both versatile musicians with an interest in learning and trying different styles and immediately found a common ground, creating music that neither of us had ever really heard or played before.”

The evening will also enjoy the release of Siama Matuzungidi’s newest album, Rivers-from the Congo to the Mississippi.

With the support of the Cedar Cultural Center and a grant from the Minnesota State Arts Board, Matuzungidi performs on stage on Tuesday, May 31st.