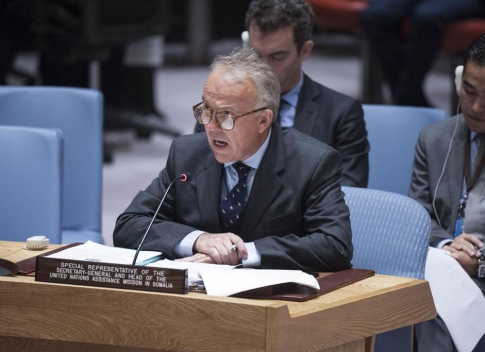 A new delay in Somalia’s elections is a matter of “immediate concern,” raising fears that the process is being politically manipulated and that the latest postponement may only be one of yet further rolling delays, the top United Nations official in the long-troubled East African country warned today.

First slated to be held in August, parliamentary elections will now take place between 23 October and 10 November, and the presidential poll by the end of November, the Federal Indirect Electoral Implementation Team, or FIEIT, announced yesterday, citing the need for more time.

“What is most critical at this point is that the new extension does not create additional space for manipulation or disruption by spoilers,” the Secretary-General’s Special Representative and Head of the UN Assistance Mission in Somalia (UNSOM), Michael Keating, told the UN Security Council.

“Rather, the urgency and momentum must be maintained and the additional time used to ensure that the process is as transparent and credible as possible,” he said, calling it a “novel and exciting experience” for a country that last held national elections in 1969 and descended into civil war and anarchy in 1991.

Mr. Keating noted that much preparatory work has been completed, and registration of 14,000 electoral college delegates and hundreds of parliamentary candidates is in progress, with many painful compromises between interest groups and clans. This broadens the college from just 135 men in 2012. Thirty per cent of the 14,000 must be women and 20 per cent youth.

“Even though the numbers involved may seem relatively modest, this is a complicated process, requiring a high degree of dedication, organizational capacity and some bravery to implement,” in a country of some 12 million people divided by tribes and clans. “The security and logistical challenges alone are considerable,” he added.

The UN is providing technical support to bolster the credibility of the process, including a code of conduct for all candidates, parliametary and presidential, and creation of an electoral dispute mechanism with the inclusion of advisors provided by international partners.
“I am under no illusions about the challenges ahead and the scope for things to go awry. But if we remain vigilant and unified, this process could mark a positive, watershed moment for Somalia,” Mr. Keating said. But the road to peace and stability will still be long.

“Violence remains a feature of life for too many people. Al-Shabaab (Islamist movement) has continued to mount spectacular attacks against soft targets, notably in Mogadishu (the capital),” he added. “These attacks have underscored the urgency both of efforts to degrade, defeat and dismantle Al-Shabaab and to address the conditions that make it possible for the group to survive.”

He paid tribute to the UN-authorized African Union Mission to Somalia (AMISOM), which has thousands of troops in the country, with an upper limit of over 22,000, entrusted with of countering Al Shabaab and other armed opposition groups, and providing security to enable the political process at all levels, stabilisation, reconciliation and peacebuilding.

“AMISOM remains vital to Somalia’s security. Its troops are paying a heavy price to bring security to the country. They need to be supported in their effort to take the fight to Al Shabaab-controlled areas,” Mr. Keating stressed.

He also voiced concerns that a growing number of Somalis, nearly five million, suffer from malnutrition and food insecurity, with only 32 per cent of the UN Humanitarian Response Plan funded at this point. They also face multiple human rights deficits, while women and children are of “grave concern,” including youngsters captured from Al Shabaab and sentenced to death.

“The challenges are considerable,” he said, adding: “But, crucially, progress is also being made in almost every domain.”