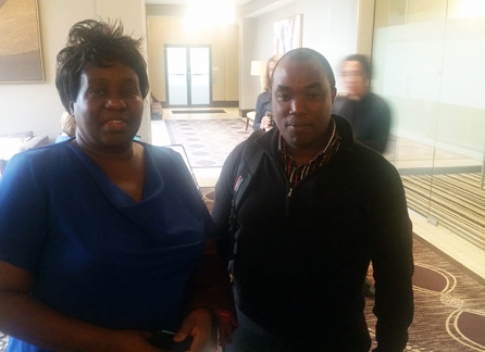 Stima Investment Co-operative Society, the investment arm for members of Stima SACCO in Kenya, is continuing its push for a bigger slice of the Kenyan Diaspora market in the United States. Credit Unions are known as SACCOS in most of the world.

Stima SACCO is Kenya’s third largest SACCO by asset size which by extension also gives it the same ranking in Africa as the continent’s largest SACCOS are based in Kenya.

“The future is very bright for Stima as we have been rated very highly in Kenya,” said Caroline Odipo, a Stima Investment board member. Odipo along with the company’s CEO Nelson Irungu are on a four state US road show to promote the company’s latest offerings.

Odipo and Irungu spoke with Mshale after they met with Minnesota Kenyans this week.

“Uptake was slow at the beginning but we have signed up over 2,000 members here in the US in the last two years,” Irungu noted. He attributed the growth to Stima finally figuring out the needs and type of customer service that Kenyan-Americans expect and the fact that Kenyan-Americans who became members three years ago received dividends “which showed them we mean business.”

Irungu said his team has been cognizant of the needs of Kenyan-Americans, key among them, the need for real time account information. A portal was established for them to address that need, Irungu said.

A Minnesota Kenyan, Richard Oganda, was one of the people giving a testimonial on what he called “superb service” from the Diaspora Desk at Stima’s Nairobi headquarters when he visited in person shortly after becoming a member. Oganda volunteered his testimony at the Stima information session on Sunday in the Twin Cities.

The Kenyan Diaspora investment potential, especially in North America, has long attracted institutions from Kenya wanting to tap into it. Many in the country have lamented that the monthly US$140 million that Kenyans in North America send to their country only goes into consumables and family maintenance and little if any goes into any investments.

“We want the money you send not to be just for consumption but also get you some returns,” Odipo said.

The Stima Investment duo of Odipo and Irungu will wrap up their Minnesota stop with one more information session on Wednesday, October 5 at the Brooklyn Park Community Center at 5:00PM.

They will conclude their US tour with stops in New Jersey and Oklahoma.