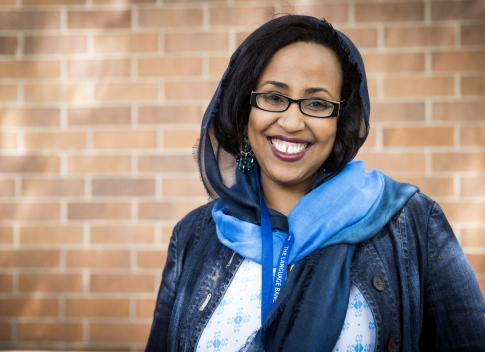 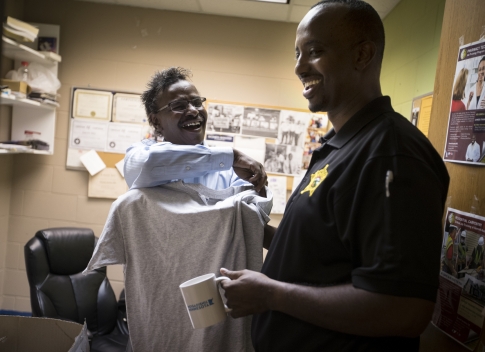 They are among a growing number of Somali-Americans recruited as bridge-builders to overcome mistrust and misunderstanding.

Abdimalik Mohamed shows young Somalis that government jobs are not far-fetched. Yasmin Muridi explains to teachers what school in a refugee camp looks like. Abdi Mohamed sifts through piles of documents that require Somali translation.

The three are among a growing number of Somali-Americans recruited as bridge-builders to overcome mistrust and misunderstanding between Minnesota’s Somali community and government agencies. While some community members welcome Somali professionals as outreach workers, others worry that they will be used as a cover to snoop.

Love for community service has these three bouncing between two cultures at a time when suspicions run high over the convictions of several young Somali men on terror-related charges.

Abdimalik Mohamed was sitting at a restaurant when a suicide bomber detonated an explosive a block away during a visit to Somalia last year. He understands the importance of counterterrorism efforts. Through that experience, he learned the importance of engaging with young people to prevent radical recruitment.

He was working with Ka Joog, a nonprofit youth organization that gained recognition for its youth mentoring program, when U.S. Attorney Andrew Luger enlisted him as the office’s community outreach specialist in January. He was looking for a new challenge, and he got one.

Community tensions were high over the federal prosecution of nine Twin Cities men charged with trying to leave the country to fight for Islamist extremists in Syria. Meanwhile, a new federal program to deter young people who might have similar ideas was meeting resistance from people who said they felt it stigmatized Muslims and might be a cover for surveillance, despite Luger’s assurances.

For his part, Abdimalik Mohamed said he sees himself as an example of those who can bridge the gap. “For me, being in this position is about young people believing that they can get high-level jobs. So that they can say, ‘I can work for government,’ ” he said.

On social media, he urges young people to stay vigilant about radical recruitment and encourages them to apply for government jobs. He organizes community outreach events, such as the forum in the Hennepin County Public Safety Facility to address concerns about anti-Muslim sentiment after the March terror attack in Brussels, Belgium. He said that those discussions showed him how much the U.S. attorney’s office supports civil rights “of all kinds of people.”

He is now on a planning committee trying to bring together the Federal Bar Association, the North American Somali Bar Association and other professional groups to focus on Islamophobia.

“The beauty about this job, as crazy as it might be: They really listen to you and take your advice,” he said. “They really do care. I want to prove [to the Somali community] that this office cares.”

Muridi occasionally goes door-knocking to meet potential families. She said she wants more Somali students to attend her school, but persuading Somali parents to send their students to an arts school is not easy. “They feel like the kids will be dancing the whole time,” she said. “I tell them to come and look at the school with their own eyes.”

In addition to her many roles at the school, Muridi finds she must work hard to dispel suspicions about the government that some refugees carry from their homelands.

“They tell me, ‘You’ve been bought,’ ” she said. But Muridi assures them that they don’t have to answer her questions, and that has helped parents trust her.

“I am the sister. I am the mother. I am the aunt, and I am the friend,” she said. “I am strict with them. I want them to learn fast and be responsible.”

Abdullahi Ali was one of the skeptical parents. Ali’s family is new to the country, and his daughter is in fourth grade. Ali said he dreaded taking his daughter to school.

“I was afraid if my child will lose her culture,” Ali said. “But Yasmin has really helped me. My daughter still speaks her native language, and she is learning English.”

To help bridge the cultural gap, Muridi hosts a workshop that shows parents how to navigate the school system. She teaches about school culture and the importance of parental involvement.

Teachers have also relied on Muridi to answer questions about their students. Muridi said she feels that it’s her duty to explain “the environment which these students grew up in.”

“How do you convince a mainstream teacher that the new 10th-grader from a refugee camp has never been to school?” Muridi asked.

Despite the difficulties, Muridi gets a lift from seeing the progress of the students and their families. She hopes to become a teacher and continue helping families.

“I learned how to attract them,” she said. “I understand their need.”

Little in Abdi Mohamed’s upbringing prepared him for his role as the sheriff’s office’s first Somali community liaison. He was a limousine driver for a decade before fellow Somali-Americans encouraged him to join the sheriff’s community engagement team in 2012.

“In order to bring together the law enforcement and the community, you’ve [got] to educate both of them,” he said. For example, in 2014, he relayed a community request to allow county inmates to wear head coverings, and the sheriff’s office changed its policy.

“People definitely had mistaken me for a sheriff,” he said. “They look at me and say, ‘Oh, thank you for being here.’ I am not a police officer. My job is to just explain the process. I don’t collect information to arrest people. I am just a civilian.”

Abdi has done outreach work in 43 cities in Minnesota and elsewhere. “I am busy,” he said as he pulled over at the Brian Coyle Community Center, a hub for immigrants in Minneapolis. “I go out every day.”

Abdi Mohamed has become a regular face at the center, and his mild demeanor puts people at ease. Some admire his respect toward law enforcement. Others have even stopped him to ask about job opportunities at the sheriff’s office.

Abdirizak Bihi, a community organizer and social activist, said there was mistrust when there were no Somalis in law enforcement. “Our young people thought people like him [Abdi] and the police were bad and a snitch,” Bihi said. But that has changed. “Now 70 to 80 percent of our young people are looking to be like Abdi and other [Somali] officers,” he added.

Many in the Somali community have low expectations of law enforcement because of their experiences back home, Abdi Mohamed said. “To explain to them that the law enforcement here is helping them is a challenge,” he said.

Because bribing officers is common in Africa, he talks about that when training law officers about cultural differences. “I tell them, ‘If you see someone East African getting out of the car coming to you, don’t shoot them.’ ”

Abdirahman Mukhtar, a youth program manager at the Coyle center, says community outreach work is crucial. “There are a lot of rumors,” Mukhtar said. “Abdi brings the facts.”