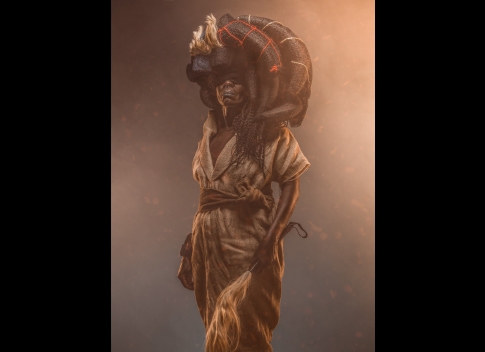 The Mau Mau Uprising was a revolt against British colonial rule in Kenya and lasted eight years(1952-1960). It accelerated Kenya’s path to independence .

The impetus for the revolt revolved around Issues like the expulsion of Kikuyu tenants from settler farms, loss of land to white settlers, poverty, and lack of true political representation for Africans. The Kikuyu were the single largest ethnic community and occupied some of the prime agricultural lands.

Wives of the Mau Mau Generals is the latest project by photographer and digital artist, Osborne Macharia.

Macharia describes his latest project as the story of a special unit of 4 women in a small village within Kipipiri Forest in Central Kenya.

They were the wives to 4 of the Mau Mau generals and just like their men, they too had leadership roles. This women would be endowed in the most unique hair styles whenever a full moon was approaching. To the ordinary folk this was normal but to the villagers of Kipipiri their hair style was symbolic.