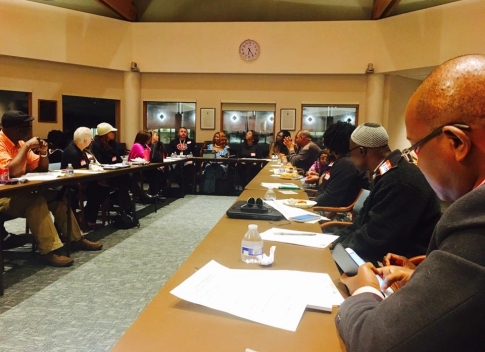 African Immigrant Services which has spearheaded a spirited effort in the Osseo School District that spans two years has come out in support of the district’s educational equity policy that was approved 6-0 by the board on Thanksgiving week.

AIS, in a press release Friday morning that Mshale received, described the policy as “historic” and said the board’s approval was “a major victory for AIS, the district leadership, and the community of parents and stakeholders.”

The Osseo School District which spans the so-called African suburbs of Brooklyn Park, Brooklyn Center, Champlin as well as Maple Grove has a student body that is more than 50% students of color, many of them children of African immigrants.

It is the same district where “Go back to Africa” and “White America” graffiti greeted students at a Maple Grove high school after Donald Trump won the presidency last month.

The board’s approval came after months of work and angst in the community. For years, students of color in the district have been reading and graduating at lower levels than their white counterparts. Minnesota Department of Education data shows 72 per cent of white students were proficient in reading compared to just 30% for black students.

The plan includes a commitment to increase diversity in the teaching staff which has just 5% teachers of color in line with what AIS had proposed back in 2014. That AIS proposal had called for a long-term institutionalized educational racial equity policy that would reinforce a “shared racial equity agenda.”

A Minnesota Public Radio report by Emma Sapong quoted African parents critical of the new policy. One parent, Amril Okonkwo, told Sapong he was not aware that such a policy was in the works.

“You’re creating a policy that will affect our African immigrant children and there’s no input,” Okonkwo said. “I truly believe that they need to change the way they do their outreach. They have to go ahead and actually seek our input from parents.”

Okonkwo and others are concerned there is no way to hold the Osseo School Board accountable to ensure the new policy’s goals are achieved. His concern might be partly due to what Superintendent Dr. Kate Maguire of the Osseo School District said after adoption of the policy. She admitted to mistakes during the first drafting process earlier in the fall when no feedback was sought from parents before being presented to the board in October.

“Once we drafted the policy and we had the first draft, we tripped up and we did not loop back and seek additional feedback,” Dr. Maguire said in comments carried by KSTP TV.

“I think it caused a breakdown in trust.”

AIS believes with the new policy that was finally presented for a vote to the school board on November 22 and passed, has new language, including the addition of culturally sensitive training for staff that is a win for parents and students of color.

“The passage of this policy marks a major victory for AIS, the district leadership, and the community of parents and stakeholders”, said Fata Acquoi, AIS education organizer. “We must continue to work with our community to deepen and sustain the impact of this amazing work.”

Abdullah Kiatamba,executive director of AIS, said what has stood in the way are “systemic racial and cultural barriers” that have impacted learning negatively in the Osseo School District.

Kiatamba went on to applaud the District’s superintendent Maguire and the school board for their “courageous action”. He said AIS looks forward to working with parents, the superintendent and the board to ensure “sustainable impact towards increased racial equity outcomes in the district.”

AIS’s strong statement, unusual in its depth and detail, should give the school district some breathing room to implement the policy after a false start in the fall. AIS, with its reputable street cred rarely issues written statements without wide consultation in the African immigrant community it serves.