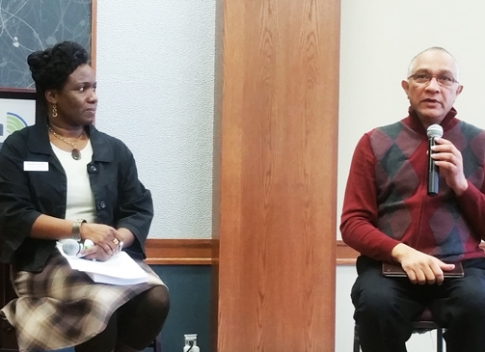 The director of the institutes for research and policy studies at the University of Liberia, Dr. Carl Patrick Burrowes, will speak tomorrow in Brooklyn Park to discuss his new book “Between the Kola Forest and the Salty Sea: A History of the Liberian People Before 1800”.

Dr. Burrowes, a native of Liberia, became head of the University of Liberia’s Institute of Policy Studies and Research in December 2016 and was tasked with the responsibility of improving it “as a think-tank dedicated towards helping to develop policy formulation and practices,” according to his appointment letter.

He had stints in various American universities before returning to Liberia. He was Professor of Communications & Humanities at Penn State for at one time. He was the Carter G.Woodson distinguished Professor of Journalism at Marshall University, where he co-founded the Center for the Study of Ethnicity and Gender in Appalachia.

In advance of his talk at Hennepin Technical College, Dr. Burrowes spoke today at a luncheon hosted in his honor at the Brooklyn Park community center by tomorrow’s organizers.

At the luncheon, Burrowes said there is a need for unity to be achieved among Liberians in Minnesota before a working coalition can be realized with other African immigrants and the black community in the state.

“How can you achieve that (black coalition) if you (Liberians) are not united among yourselves?” asked the author and university don.

He said he has lost faith in his generation but is hopeful the younger generation’s thirst for their history, a subject of his book, will make a difference in society’s well-being.

Dr. Burrowes will speak more at length about his book and work at the Friday evening event at Hennepin Technical College.

The event is free and open to the public but registration is required online here.