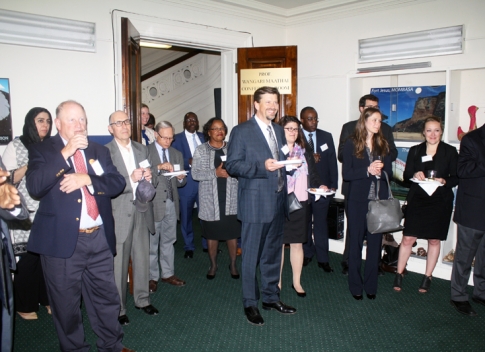 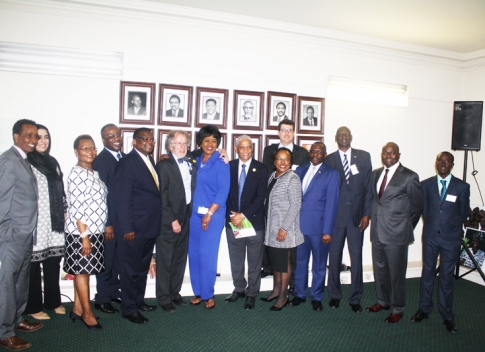 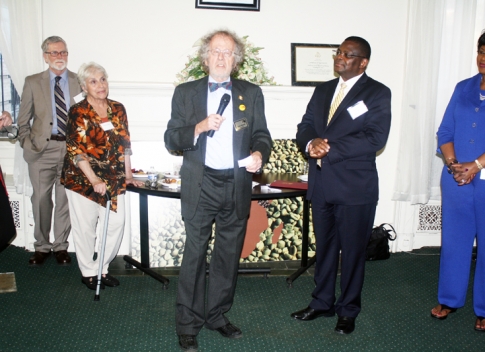 The world’s largest shipper of books to the African continent renewed their commitment to literacy with an event honoring the group’s biggest contributors and those who make their work possible.

Books For Africa, a U.S. based nonprofit held their annual Summit Society Reception on Tuesday, April 4, at the Embassy of Kenya in Washington, DC to recognize top donors and the African diplomatic corps for their help in getting millions of books to the continent.

“We have 14 countries represented here, 11 ambassadors and it’s really an exciting event,” Patrick Plonski, executive director, Books For Africa said. “It’s important that we always make sure that we are sending books that are valuable to Africa.”

“It’s not just sending books that are convenient for us to send or that we think are useful, but it’s important that they are beneficial to our beneficiaries.”

The organization’s mission is to end the book famine in Africa and this year they plan to send 2.8 million books to their partner countries.

“We are always looking for books,” Plonski said. “We will be sending millions so that means we need a lot of books.”

Along with book donations Plonski insisted that just like any other nonprofit Books For Africa needs monetary gifts.

“We need money to send the books,” he said. “Donors are important to any nonprofit and we are no different.”

With a list of brand new actions, Plonski and team encourages communities to pull together at their local churches, rotary clubs or corporations to help move literacy onward in Africa.

“We have a number of initiatives moving forward,” he said. “Things like computers, e-readers and custom printing of books in different languages such as Portuguese, Swahili or other languages that are used in Africa.”

“While we continue to send books in English and also in French it’s always with the goal of adding value to what we provide and giving people what they want.”

According to the nonprofit, most African children who attend school have never owned a book of their own, and in many classrooms, 10 – 20 students share one textbook.

Kenyan Ambassador to the United States Robinson Njeru Githae, the Summit Society honorary chair, said through Books For Africa the goal is to have every child in Africa have their own individual textbook instead of having to share.

“Books For Africa is one of those organizations that Kenyans truly appreciate,” Githae said. “They have been able to ship to Kenya more than 15 containers of books which has helped our students in elementary, secondary and now at their universities and law schools so we are truly grateful to Books For Africa.”

Each container holds about 20,000 books at the cost of 50 cents per book to ship from the U.S. to Africa.

More than 38 million books have been shipped to school libraries, orphanages, adult literacy programs and community resource centers in 49 different countries since 1988.

Sharon Sayles Belton, the vice president for government affairs and community relations at Thomson Reuters knows firsthand the importance of books in the Africa. Thomson Reuters donates the law books that are sent to African law schools by Books For Africa through the latter’s Law and Democracy Initiative.

“There is a significant number of Africans in the state of Minnesota,” Belton said. “We have the largest Somali population in the entire U.S. in Minnesota and we have a large Liberian, Ghanaian and Nigerian population.

“My own personal commitment really comes from my belief that in order for any community to prosper we need to ensure they have access to education. If we work hard to educate the children of Africa, Africa will rise.”

Belton, who is also Minneapolis’ first black mayor where she served two terms from 1994-2002, believes that not investing in the future of children on the African continent would be a detriment to everyone globally.

“Those children run the risk of the dark side of humanity undermining their hopes and dreams,” she said. “We need to take every effort to keep that from happening and it starts first with love and then a book.”

Sarafina Wright is the Mshale correspondent in the DMV area (Washington DC, Maryland and Virginia). She is a Washington Informer reporter and editor of WI Bridge. She is a multimedia journalist with more than six years of experience in print/online journalism, television and radio.