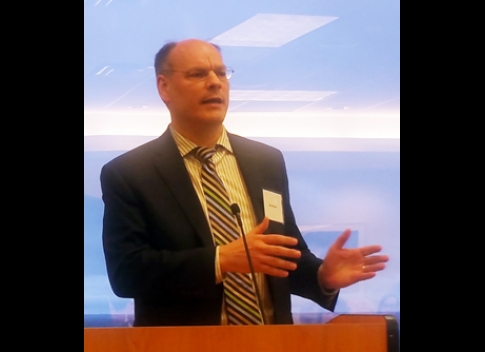 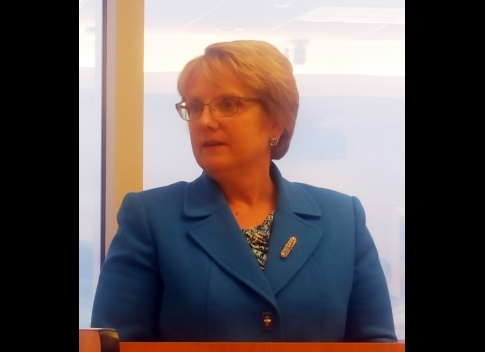 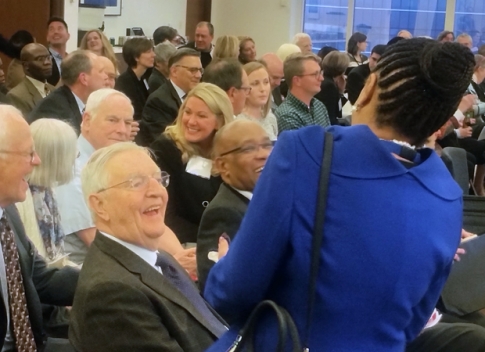 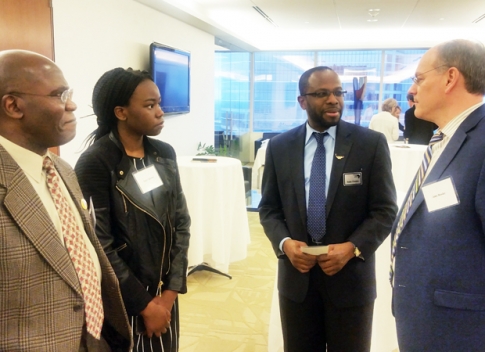 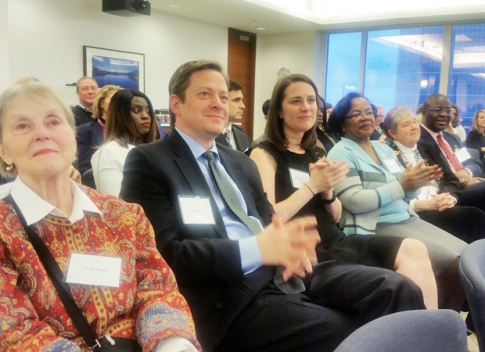 MINNEAPOLIS – The Chief Justice of the Minnesota Supreme Court, Lorie Skjerven Gildea, joined with former Vice president Walter Mondale and other top judicial officers to offer support to the rule of law in Africa during the annual celebration of Law Day, a national event established by President Dwight D. Eisenhower in 1958 as “a day of national dedication to the principles of government under law.”

The event, held at the 40th floor offices of Fredrikson & Byron (with 243 lawyers on staff its #2 in Minnesota Lawyer magazine Minnesota’s Largest Law Firms 2017 list) in Minneapolis, was a fundraiser for Books for Africa’s Jack Mason Law & Democracy Initiative. Fredrikson & Byron president, John Koneck emceed it. The initiative seeks to address the scarcity of law and human rights books in Africa to further the rule of law in Africa.

The initiative is co-chaired by former United Nations secretary general Kofi Annan and US vice president Walter Mondale. Among those who sit on its advisory board include Fatou Bensouda who is the chief prosecutor at the International Criminal Court at The Hague and judge Michael Davis, former chief judge of US Federal District of Minnesota.

importance of the US courts in undergirding its democracy said “it is also a great reminder of the great work Books for Africa is doing in spreading the rule of law in Africa.” She added that the law books that are sent which are primarily donated by Thomson Reuters “are filled with legal knowledge, precedent and process” that are critical in the infrastructure that the rule of law depends on.

Gildea also urged those present to make “their voices heard” at the Minnesota legislature which is about to wrap up its session saying that the woefully underfunded Minnesota court system needs full funding  to ensure that the administration of justice is not impeded. She said the public raising its voice on court funding is important as those who work at the courts “do not have cute kindergarteners to parade before the legislators to plead for funding.”

The chief justice was echoing court funding remarks that Robin Wolpert, president of the Minnesota Bar Association had made who she spoke before her.

Earlier, president Trump had issued a presidential proclamation to mark the day in which he said “Today, we celebrate Law Day, as we have since President Dwight D. Eisenhower first commemorated it in 1958, and reflect upon our great heritage of liberty, justice, and equality.”

John Bessler, the featured speaker at the Books for Africa Law Day event, discussed the book he recently edited –Justice Stephen Breyer’s Against the Death Penalty. Proceeds of the book, which he later signed for participants, will be donated to Books for Africa’s Law and Democracy Initiative.

Bessler said a number of African countries had already eliminated the death penalty and it is time for America to do the same. Bessler is a professor at the University of Baltimore School of Law and also the husband of United States Senator Amy Klobuchar of Minnesota.

The 14th Amendment to the US Constitution which was adopted in 1868, states that no state shall deny any person in its jurisdiction the equal protection of law.

“We have over 150 instances where people have been exonerated after being convicted and being on death row for years,” Bessler said.

Calling the death penalty cruel and unusual punishment, Bessler said it flies in the face of United Nations resolutions that condemn it.

Also speaking at Monday’s event was Judge Michael Davis who introduced Bessler to the podium. Davis is the former chief judge of the US Federal District Court in Minnesota.

Thomson Reuters, which is the primary provider of the new law books that are sent by Books for Africa pledged it continued support through remarks delivered at the event by its vice president of government affairs and community relations, Sharon Sayles Belton. Sayles Belton is also the former mayor of Minneapolis, the first female and black person to do so where she served two terms.

Lane Ayres, who administers the program for Books for Africa, said the initiative has shipped 72 law and human rights libraries to 20 African countries through the generosity of Thomson Reuters and others, such as those at the Law Day event.

“We appreciate the support that everyone continues to give,” Ayres said.