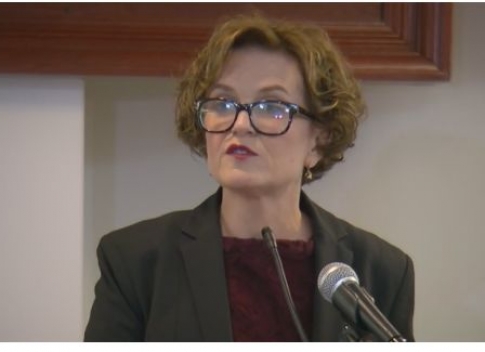 Mayor Betsy Hodges of Minneapolis held her State of the City address at the Masjid An-Nur in Minneapolis, the first time the address has been delivered at a mosque according to city officials.

When the mayor announced last week her intention to deliver the address at the An-Nur mosque in north Minneapolis she said “I am delivering my State of the City address at the mosque because at a time when our Muslim community is under attack from the highest levels of the federal government, I want to send a strong signal to the community that their mayor and their city stands with them.”

At today’s address at Masjid An-Nur, Hodges described Minneapolis as “a welcoming city for all who come in peace, for all who come for light and for hope. No president will make us change that.”

Given that it was the first time the address was at a mosque, there was an expectation that the only Muslim and black person on the council, Abdi Warsame, would be present. Masjid An-Nur is located in north Minneapolis, a largely black neighborhood. Warsame is the first Somali-American elected to the Minneapolis City Council and was the highest ranking elected Somali-American in the state until last year when Ilhan Omar became a state representative.

After the mosques Imam Al-Amin called Council vice-president Elizabeth Glidden to the podium to introduce the mayor, Glidden first stated that she was there to represent Council president Barbara Johnson who was out of state. She then went on to introduce the the Council members present. Almost half of the 13 member council was present (John Quincy, Lisa Bender, Alondra Cano, Blong Yang).

It is not the first time that Councilman Warsame has skipped an event considered significant. He has been missing in action for example when the United Black Legislative Agenda was being shaped earlier this year. Part of the goal of the agenda this was a call to the current legislative session to address racial disparities in education, health and the workforce. When the agenda was unveiled, participants active in its presentation included the Council for Minnesotans of African Heritage, the Northside Community Reinvestment Coalition, Ummah Project, Voices of East African Women and others.

A member of the Oromo community leadership in the state who declined to be named was critical of Warsame “for not showing up at important events to us, he always has excuses.” The leader then fired off a number of events they have reached out “to our man” to come that he has declined including one crucial human rights meeting at the Brian Coyle last Saturday.

Al Flowers, a community organizer, while noting the significance of the mayor holding the event in north Minneapolis and at a mosque no less, called the choice of venue “purely political” adding Warsame “has his own battles to fight.”

Flowers instead said he wants the mayor to address the killings that are happening every week in north Minneapolis “that the city does not seem ready to deal with.”

Reached by phone to explain his absence, Warsame said he had a prior family engagement he needed to attend to “besides I am pretty burned out from the endorsing convention over the weekend.” Warsame won the Minneapolis DFL endorsement last Saturday. His main competitor for the endorsement, Mohamud Noor, boycotted the endorsement convention citing fear of violence against his supporters.

Warsame however commended the mayor’s efforts to address islamophobia and hoped it would not be a onetime thing “you know I was the first one to hold a conference on islamophobia,” adding that islamophobia is real and needs to be “faced head-on.”

At her address today, Hodges reiterated her commitment to a city ordinance that keeps police work separate from the work of federal immigration officials.

“As long as I am Mayor, that ordinance will stand,” said Hodges.

The mayor, who is up for reelection in November and faces a stiff challenge, also addressed other issues of concern to the city including what she considers successes attributable to her administration.

On matters of relevance to the African immigrant community, she said the newly opened Opportunity Hub in the Cedar-Riverside area as part of a “promise of reducing barriers to employment in the East African community.”

The mayor also addressed the dire housing issue Minneapolis faces. She said her administration had invested over $40 million in affordable housing programs over the last three budgets which includes $14.7 this year.

Addressing the gentrification that is happening in many parts of the city, Hodges said this year’s city budget marks the first investment of $1.5 million to preserve existing affordable units.

On matters development, the mayor said “we have had five straight years of more than one billion dollars in development permits in Minneapolis, and the cranes keep going up in the sky.”

“The state of our city is strong. We are growing.” she said