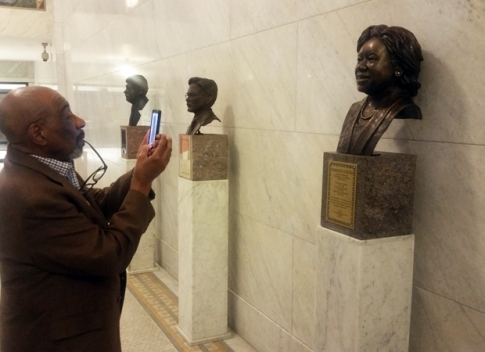 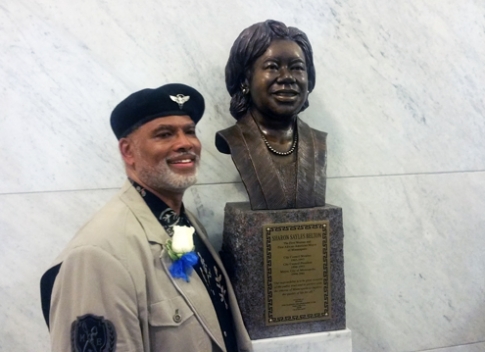 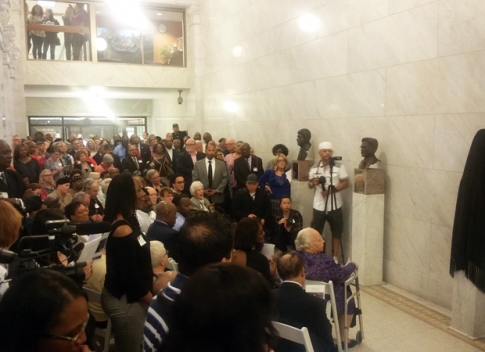 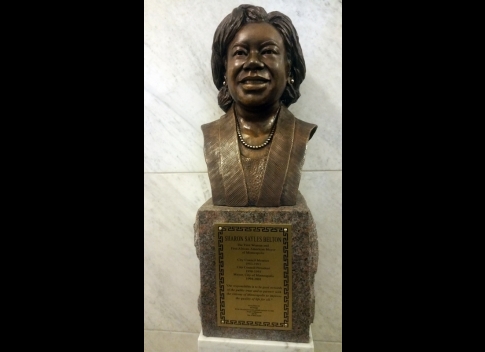 About 300 people squeezed into the third floor balcony of Minneapolis City Hall on Monday to witness the unveiling of a bronze bust honoring Sharon Sayles Belton, the first woman and first black mayor of Minneapolis.

The bronze bust will be next to the only other two already there, one of Van Freeman White and another of Brian J. Coyle. Both are former Minneapolis councilmen with Van White being the first African-American elected to the Council. The Brian Coyle Center in Cedar-Riverside that serves as a busy community center for the Somali community is named after Coyle.

Sayles Belton, who has lately gotten active in global affairs through her current employer Thomson Reuters, where she is vice president for community relations and government affairs, has also deepened her ties with the local African immigrant community. She has spearheaded efforts to bolster the teaching capacities of African Law schools through the Law and Democracy Initiative at Books for Africa. Thomson Reuters provides the Law books for Books for Africa to send to Africa. That initiative recently marked its 10th anniversary on Law Day.

“We focused more on getting the job done, rather done focus on who got the credit,” she said Tuesday at the unveiling as she explained her successful two term tenure at the helm of the state’s largest city. She had served for ten years as a council member before she ran for mayor in 1993.

Her success was in part because of her deliberate attempts to invite everyone to the table, she said, but that the strategic and responsible investments as well as “informed risk” were the ultimate formula that brought success.

Also making remarks Tuesday was the city’s current mayor Betsy Hodges. She said the metal bust, while strong “is not as strong as you.” Hodges, who is facing a tough reelection challenge this fall, is serving her first term and is the second female after sayles belton to be the city’s mayor.

When Sayles Belton came into office the city she inherited a host of problems that are well documented, one of them being crime. By the end of her two terms, crime had been contained. In 2001 when she left office Sam Grabarski, president of the Downtown Council which draws membership from the city’s largest downtown employers told the media back then that when Belton came into office, the future of downtown was in question as it was not attracting much business and office vacancy rates were high. Grabaski said Sayles Belton helped turn around downtown’s fortune.

The 2000 census was one year before she left office. Census-takers reported a population increase for the first time in half a century.

The popular Midtown Global Market, an internationally themed public market, is a legacy of Belton although it was a controversial project back then. Her take on controversy and difficulty? “You cannot run away from your problems,” she said Tuesday.

Civil rights activist Josie Johnson and General Mills executive Reatha Clark King were the co-chairs of the volunteer tribute committee which had set a goal of $100,000 needed to create and install the bronze bust.

“This is one of the most important things I have ever been involved in,” Mike Essien, president of the Minnesota Black Lawyers Association said during an interview after the unveiling. MBLA is one of the organizations donors that contributed funds towards the tribute. Clark King told Mshale after the unveiling that donations towards the bust tribute are still being accepted through a fund at the Minneapolis Foundation (See below for details).’

The steering committee also announced a fall 2017 community reception and education forum in collaboration with the University of Minnesota’s Hubert Humphrey School of Public Affairs. Professor John of the University of Minnesota’s African American & African Studies department told Mshale details on the forum will be announced at a later date. Wright will be one of those spearheading the forum.