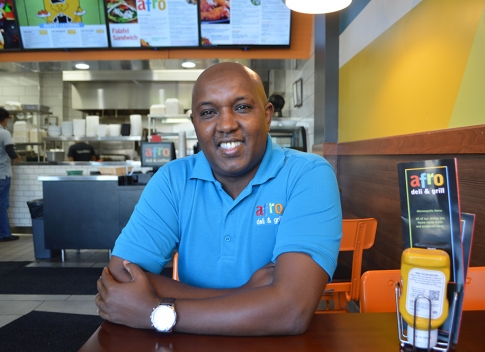 In our latest Business Spotlight,  Bethel Gessesse sat down with Abdirahman Kahin, the owner of the thriving Afro Deli to discuss the state of his widely celebrated eateries and future plans. Afro Deli has two locations in the Twin Cities, one in the East Bank of the University of Minnesota and another one in St. Paul. To be considered for a feature in our Business Spotlight, send an email to the editor.

What inspired you to open a restaurant?

A lot of things. Lack of African restaurants in the Twin Cities —that’s one of the reasons, and I just wanted to be in the restaurant business; that was a hidden passion. I saw a possibility. Also, when you open a restaurant, you bring people together. So that was my main thing.

What struggles have you encountered in keeping your business running?

You know, there is always trials and downsides but it’s mainly starting, bringing people in— those are the challenges. Also, staffing, finding the right people is a challenge, and maintaining the quality and the consistency is also a challenge. But challenge is always good, because it makes you improve.

I know there were some challenges leading up to the closing of the West Bank location.

Yes, I settled with them (African Development Center) so I can’t talk too much about it. It’s been in the newspaper, you can find the court papers, but I cannot say much about it. That’s just how legal things work. So we moved on, we are very happy where we are. We are very fortunate to be in this location (West Bank of the University of Minnesota).

There is a lot of business here?

Yes, a lot of business, bigger location space wise, we expanded our hours, we are open seven days. It was a blessing in disguise, and I see a bright future.

You were invited to the State of the Union Address last year. How was that experience?

It was amazing. Oh my goodness. I can’t describe it. It’s the number one political event the whole year. People wait years and years to be invited so for me it was an honor and a privilege. And I think that reflects the work we’re doing as Africans in the state of Minnesota and in this country. That shows we are doing something positive. It shows our impact whether it is social or economic. We are very productive.  I’m blessed to be the person who shows that success, but the work of the African community in the Twin Cities— that’s what I was representing. If there was no great African community, I may not have gotten that chance. So this is a collective effort. They needed someone to represent, it happened to be me.

What advice would you give to aspiring restaurant owners or entrepreneurs?

Open your doors wide. Don’t limit yourself to one particular group or community. If you open a restaurant, that means everyone wants to rest inside. So you don’t want to choose who you’re bringing in. Make sure you target everyone. There’s a lot of opportunity in the restaurant business. If you believe your food concept will fly, make sure you make your place inviting to everyone.

I understand you are going to be a vendor for the upcoming Super Bowl?

Congratulations. How did that happen?

Thank you, we have been going through the process for a while and it has been a long one. They have to really pick the right food.

Very selective. This is a very diverse society. We have to reflect [that], we have to have some presence. Afro Deli was the restaurant they selected, especially since there is a large Somali community. They really wanted to have that taste represented. It wasn’t easy to get in. We had so many interviews, so many trials, so many times they came to visit the restaurant. I had to cater to the host committee of the NFL. They were sold when they tasted the food. They were very particular. There were about 10 people. All executives of the NFL and the Super Bowl. So we were sold that day. The Super Bowl is like ten days. There’s over a million people in town. Afro Deli is in the NFL Newspaper, we are in the business directory of The Super Bowl.

It’s going to be a fun ride (laughing). You can come volunteer for us.

We will be on the lookout for that. Last question: What is next for you and Afro Deli?

We are going to open [new locations] in 2018; we are selecting sites. We are re looking in Uptown or Edina. Those are our next targeted locations for Afro Deli.  We are also opening a new restaurant on the West Bank. You know Mapps Coffee Shop? This is breaking news.

I get to break the story? Thank you.

Yes, I’m partnering with Mapps. We are going to come up with a Turkish concept. They are from Turkey, so they have really good food. I think they have one of the best foods in the world. In the east coast and west coast, people eat it all the time. And Europe too. Minnesota knows Greek — it’s similar to Greek, maybe better because it has Middle Eastern influence too. So we’re bringing a chef from Turkey. We’re going to have kebabs, shawarma, falafel, baklava, and Turkish pizza. At the same time, we are going to maintain their coffee, and it’s going to happen this fall, 2017. It’s going to be the end of September. So that’s what I’m up to right now. And then, 2019 for sure, we’re going to open in Djibouti.

That is where you are originally from (Djibouti)?

Yes, and then we’re going to expand to Kenya, Ethiopia— I see most of our growth will be in Africa. We want to sharpen our skills, our systems— not just the food. That’s in our future —Kenya and Djibouti. We’re building the team now.

That must be inspiring when you can go home and help the community there?

Yeah, because Africa is a growing market and hospitality right now— there’s room for improvement. So that’s my biggest goal, is to improve the restaurant operation, hospitality, and service. That’s the ultimate goal.

Gessesse: Thank you so much for your time.