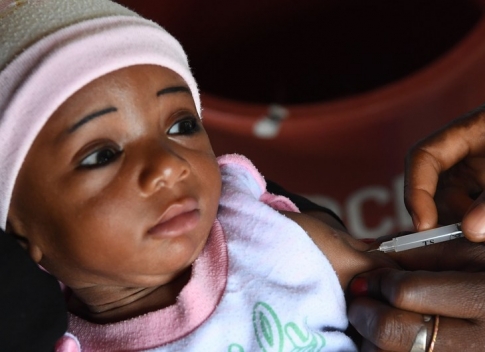 “Last year, it is estimated that vaccines saved the lives of as many as three million children,” said Robin Nandy, the UN Children’s Fund (UNICEF) Chief of Immunization.

That’s three million future doctors, teachers, artists, community leaders, mothers and fathers alive today, “thanks to millions of frontline health workers who walk for hundreds of miles to remote locations, through jungles and across seas to reach every child,” he added.

But despite this solid progress, UNICEF points out that in 2016, approximately one-fourth of deaths among children under five were from pneumonia, diarrhoea and measles, and could have been mostly prevented by vaccines.

Also troubling is that more than19 million children round the world miss routine vaccinations, including 13 million who have never been inoculated.

Low immunization coverage compromises health gains throughout communities at risk, for mothers, children and the poorest – all of whom need it most.

Two-thirds of unvaccinated children live in fragile or conflict-affected countries, including Syria, which saw the sharpest decline in inoculated children between 2010 and 2016.

According to UNICEF, in 2016 vaccine-preventable diseases were responsible for about a quarter of an estimated 1.4 million deaths among those under age five – with Nigeria, India, Pakistan, Indonesia, Ethiopia and the Democratic Republic of the Congo (DRC) accounting for half of the world’s unimmunized children.

These vaccine-preventable diseases do not need to be deadly killers, and numerous countries have seen a significant increase in the number of children vaccinated since 2010.

Sudan, Philippines, Mexico and Vietnam were among those driving most of this decade’s immunization coverage gains. Moreover, the number of unvaccinated children in India dropped from 5.3 million in 2010 to 2.9 million in 2016.

The top 10 countries where vaccination coverage has increased between 2010 and 2016 are Palau, Malta, DRC, Comoros, Azerbaijan, Ethiopia, Timor-Leste, Barbados, Costa Rica and India.

Additionally, thanks to vaccines, maternal and neonatal tetanus have been eliminated in all but 15 countries – with Ethiopia, Haiti and Philippines having eradicated the disease just last year.

“We continue to work with governments on the ground, including in places affected by conflict, in support of these unsung heroes who take on this extremely dangerous work to save lives,” Dr. Nandy said.

The UN World Health Organization meanwhile pointed out that vaccines protect people from more than deadly diseases, saying: “If we increase vaccine coverage in low- and middle-income countries by 2030, we could prevent 24 million people from falling into poverty due to health expenses.”

World Immunization Week, which runs from 24-30 April, shines a spotlight on global public health to increase rates of immunization against vaccine-preventable diseases around the world.