Home News This is how Trump is really changing immigration 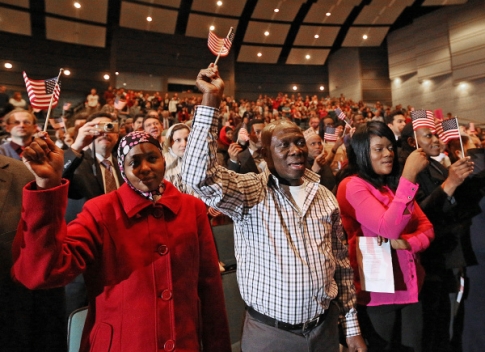 A Trump supporter named John B. who emailed me recently wrote that, “No one is against legal immigration.” President Trump and his administration are, I replied.

Yes, Trump still wants his big, beautiful wall to stop illegal border crossings. But he’s been railing against all forms of immigration since his campaign. And he’s having a much easier time chipping away at legal immigration than funding his wall. In some cases, the methods are strict quotas or new rules. But paperwork and red tape work, too. For instance, this administration tripled the number of pages in green card applications. Forms for sponsoring a foreign-born spouse are nine times longer than they used to be.

Here’s an overview of key ways Trump has made it more difficult and expensive to come here legally for foreign students, skilled temporary workers, green cards holders, refugees and others.

The Trump administration has piled new compliance rules, documentation requirements and other regulations on H-1B visas. These changes make it much more costly for employers to use H-1B visas to hire skilled foreign workers, which is a likely reason that applications dropped by 20% from 2016 to 2018.

The Trump administration announced plans to take away work permits from those with H-4 visas — the visa for spouses of H-1B workers. In 2015, the Obama administration allowed H-4s to work, and about 91,000 of these visa holders, many of whom are as skilled as their spouses, leaped at the opportunity.

The number of foreign students at U.S. universities was down about 17% in 2017 and likely will fall further this year. A major draw of studying in the United States is the ability to work here after graduation. Those on student visas can legally work for 12 months after earning their degrees, and STEM graduates can stay for three years under a program called Optional Practical Training. In 2016, about 200,000 students signed up for OPT, which is often a first step toward an H-1B visa.

Foreign students fear that President Trump will restrict OPT or the H-1B visa. Trump hasn’t canceled OPT yet (and his administration even defended it in court) but $63,000 a year (the cost of tuition and living expenses at UCLA) starts to look like a very risky investment if paying for it depends on getting a work visa in a few years.

Trump temporarily halted the entire refugee program last year, claiming that terrorists would get into the country masquerading as refugees. It started up again for most countries, but Trump precipitously cut the number of refugees the U.S. will accept. If admissions for 2018 continue at their current pace, 75% fewer refugees will arrive this year than in 2016. Trump even canceled a planned pilot program that would have allowed private individuals or charities to sponsor refugees and absorb all welfare costs — the kind of program Canada has had for more than a decade.

Last year, former Secretary of State Rex Tillerson ordered additional security screenings for all immigrants and visitors seeking visas — a move also presented as a way of keeping out terrorists. Immigration attorney Shabnam Lotfi told me that these new procedures, “are causing significant and expensive delays for visa applicants who have already been vetted under the current effective security procedures.”

The administration has directly and indirectly hampered the ability of foreigners to ask for asylum in the U.S. For instance, it cut the number of visas issued to Venezuelans by as much as 74% relative to 2013. That country is in political and economic crisis, but Venezuelans have to get to the U.S. to request asylum — and they can’t get here without a visa. Meantime, the Border Patrol is discouraging asylum-seekers from Central America by breaking up families who arrive at the southern border. The government places parents and children in separate immigration detention cells, sometimes for months.

In a string of announcements over recent months, Trump has said he’ll end Temporary Protected Status by 2020 for about 437,000 migrants mostly from El Salvador, Honduras and Haiti. TPS allowed them to stay here legally after natural disasters struck their home countries. More than 80% of TPS migrants from those countries have jobs here. They have about 273,000 U.S.-born children. Many have been here for decades; they won’t leave now, just as Salvadorans didn’t leave between 1996 and 2001 when their TPS was rescinded.

This is just the low-hanging fruit on the immigration tree. Trump would happily prune more if he could get Congress to go along. He endorsed the RAISE Act, which would cut legal forms of immigration by 50%. He so badly wants to eliminate diversity visas and severely restrict family-based immigration that he seemed willing to trade partial amnesty for some Dreamers (the young people enrolled in the Deferred Action for Childhood Arrival program). Still, the changes Trump pushed for would have resulted in the largest policy-driven gutting of legal immigration since the 1920s. Thankfully, they didn’t make it through the Senate.

Trump campaigned that he would take steps to grow the economy by 3% per year or more. To that end, he’s cut taxes and slashed regulation. But he needs legal immigrant entrepreneurs, investors and workers to keep expanding economic growth — especially with unemployment now below 4%. He won’t make America great again without letting in more legal immigrants.

Alex Nowrasteh wrote this article for the Los Angeles Times.

Alex Nowrasteh is the senior immigration policy analyst at the Cato Institute.