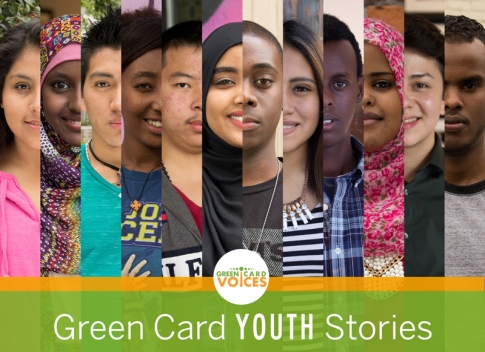 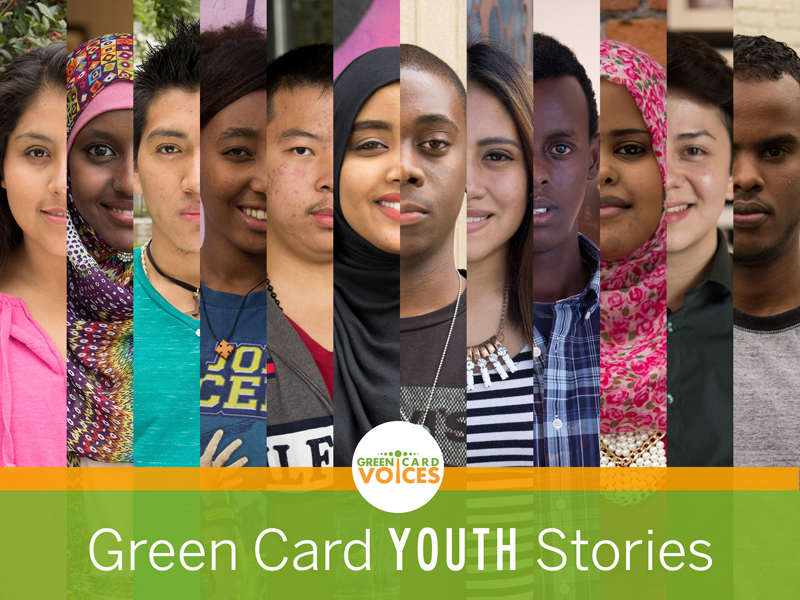 Her face now reserved, Aisha Abdullahi sits on stage under a bright spotlight. Jose Guzman works the microphone and camera while Tea Rozman-Clark perches in an opposing chair, leaning forward, as she attempts to draw a story out of the young woman whose voice has unexpectedly fallen to a barely perceptible decibel. Seven of us in the auditorium of Intermedia Arts wait soundlessly.

Abdullahi, born in Nairobi, lived with her grandma in Kenya for ten years while her mother lived in the United States. Abdullahi was finally able to rejoin her mother and siblings as a young teenager. She warms to Rozman-Clark’s voice and opens up slightly, sharing her hope to finish her last semester of high school and then commence college where she’ll study nursing.

Her story becomes one of hundreds recorded and archived by Green Card Voices, a 501-non-profit that endeavors to acquire first-person perspective about immigrants’ lives, increasing the appreciation of the immigrant experience in America. (Mission Statement)

Renting workspace at Intermedia Arts, Green Card Voice’s regard for first-person immigrant stories and the story’s ability to connect and empower aligns with the philosophy of many other highly recognized and honored organizations: StoryCorps, Community Celebration of Place, Studs Terkel, and simply the many griots worldwide who understand the power of a well-told tale.

“I don’t know what happened,” Abdullahi says in an animated and stronger voice after her recording session, “when I was sitting in that chair, I just suddenly felt shy.” Currently three staff members strong, Green Card Voices use the material they collect from their subjects and add photos from the storyteller’s homeland as well as pictures from daily activities here in the United States. A five-minute piece is produced and added to their collection.

Green Card Voices zeroes in on the immigrant story as a way to build a bridge between immigrants, non-immigrants, and advocates from across the country (Vision Statement). The stories are captured in audio and video recordings then edited and disseminated in a variety of formats including educational materials for schools, workplaces, and community centers.

Their first book, “Green Card Youth Voices: Immigration Stories from a Minneapolis High School,” has been awarded the Gold Medal Award for Best Multicultural Non Fiction Chapter Book in the Moonbeam Children’s Book Awards. This book and its recognition provide not only another medium to share their story, but an affirmation for their diligent work.

Somali youth, Ahmed Hamza Mahamed, was born in Saudi Arabia. When he was four, his family moved to South Africa. Eventually, they ended up here. He also sat in the spotlight and chronicled his immigrant story. Mahamed said, “My mom likes that I’m involved [in this project]. It’s good to know other people’s stories.”

To listen to the stories produced by Green Card Voices, explore their website.